Cape Verde Achieves 100% Renewable Energy Goal. The island nation of Cape Verde has pledged to power the entire country with nothing but renewable energy by the year 2020, and vowed to help other African states work towards the same goal in future. 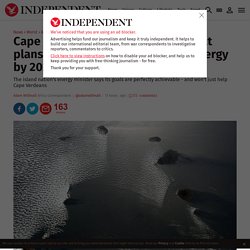 With almost no mineral resources of its own and little arable farmland, the outcrop in the middle of the Atlantic ocean relies on expensive imports for almost all the needs of its 550,000 population. Sweden Becomes World's First Oil-Free Economy. Sweden is to take the biggest energy step of any advanced western economy by trying to wean itself off oil completely within 15 years - without building a new generation of nuclear power stations. 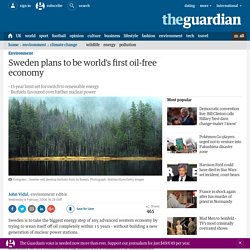 The attempt by the country of 9 million people to become the world's first practically oil-free economy is being planned by a committee of industrialists, academics, farmers, car makers, civil servants and others, who will report to parliament in several months. The intention, the Swedish government said yesterday, is to replace all fossil fuels with renewables before climate change destroys economies and growing oil scarcity leads to huge new price rises.

"Our dependency on oil should be broken by 2020," said Mona Sahlin, minister of sustainable development. "There shall always be better alternatives to oil, which means no house should need oil for heating, and no driver should need to turn solely to gasoline. " Germany Closes Last Nuclear Power Plant. Germany's coalition government has announced a reversal of policy that will see all the country's nuclear power plants phased out by 2022. 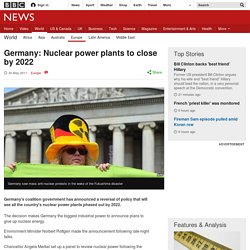 The decision makes Germany the biggest industrial power to announce plans to give up nuclear energy. Environment Minister Norbert Rottgen made the announcement following late-night talks. Chancellor Angela Merkel set up a panel to review nuclear power following the crisis at Fukushima in Japan. There have been mass anti-nuclear protests across Germany in the wake of March's Fukushima crisis, triggered by an earthquake and tsunami. 'Sustainable energy' Mr Rottgen said the seven oldest reactors - which were taken offline for a safety review immediately after the Japanese crisis - would never be used again. Six others would go offline by 2021 at the latest and the three newest by 2022, he said. Last UK Coal Plant Closes. India Generating 60% of Electricity from Renewables. Tesco Running on 100% Renewable Energy. UK supermarket giant Tesco is not exactly popular with the deeper green environmentalist crowd. 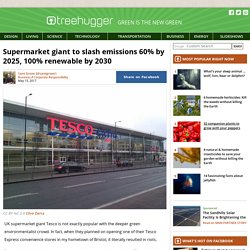 In fact, when they planned on opening one of their Tesco Express convenience stores in my hometown of Bristol, it literally resulted in riots. But while there's legitimate concern around the oversized power that Tesco wields to transform our high streets, it's hard to deny that the company has also made some substantial and important commitments to sustainability. Whether it's tackling food waste, deploying electric vans for deliveries or housing employees on the roofs of its stores, many of its initiatives reach beyond the ubiquitous promotion of reusable bags or selling organic produce. Now Business Green reports that the company is making a firm, long-term commitment to the fight against climate change.

Specifically, that commitment includes a promise to slash its own operational greenhouse emissions 60% by 2025, and by 100% by 2050. Wind Providing 26% of China's Electricity. Last month Energywise argued that the primary reason Chinese wind farms underperform versus their U.S. 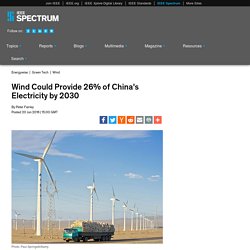 -based counterparts is that China’s grid operators deliberately favor operation of coal-fired power plants. Such curtailment of wind power has both economic and technical roots, and it has raised serious questions about whether China can rely on an expanding role for wind energy. Australia Achieves 100% Renewable Power. As plans emerge for the development of a massive new “baseload” solar thermal and storage plant to “replace” coal in South Australia, a new report from WWF Australia has questioned the very concept of “baseload”, arguing that this model of power generation is made redundant by a 100% renewable energy grid. 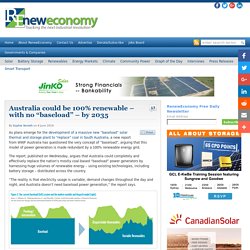 The report, published on Wednesday, argues that Australia could completely and effectively replace the nation’s mostly coal-based “baseload” power generators by harnessing huge volumes of renewable energy – using existing technologies, including battery storage – distributed across the country. “The reality is that electricity usage is variable, demand changes throughout the day and night, and Australia doesn’t need baseload power generation,” the report says. “With key market reforms in place to manage the energy transition, Australians can comfortably let go of the mindset of ‘baseload’ and have confidence in a modern, reliable, renewable energy sector powering our future.” Germany Achieves 100% Renewable Energy. Germans have set their sights on powering their country from renewable sources exclusively by 2050. 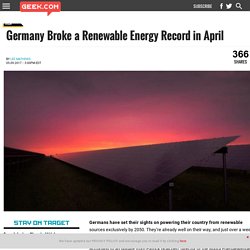 They’re already well on their way, and just over a week ago they celebrated a major milestone. According to an update from Patrick Graichen, director of the Agora Energiewende Initiative, 64% of the power consumed in Germany over the final weekend in April came from renewables. Sunny, breezy weather gave solar, and wind farms a big boost, and biomass and hydro plants also helped out. Just last year, deal weather conditions created a very brief window one afternoon where renewable energy met 87% of demand. There was a surplus of electricity as a result, which resulted in negative billing. In a post about this year’s record-breaking weekend, Graichen said that most of Germany’s coal plants weren’t operating on Sunday the 30th, and nuclear stations didn’t have to contribute much to the effort, either.

Fossil fuels and nuclear are being pushed aside elsewhere in the EU.