We won’t be listening to music in a decade according to Vinod Khosla. Depending on who you ask, the advantage of technology based on artificial or machine intelligence could be a topsy-turvy funhouse mirror world — even in some very fundamental ways. 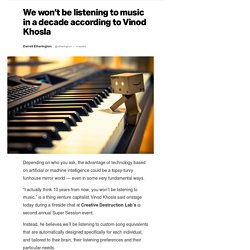 “I actually think 10 years from now, you won’t be listening to music,” is a thing venture capitalist Vinod Khosla said onstage today during a fireside chat at Creative Destruction Lab’s second annual Super Session event. Instead, he believes we’ll be listening to custom song equivalents that are automatically designed specifically for each individual, and tailored to their brain, their listening preferences and their particular needs. Thousands of Chinese Fans Pay to See Hologram Singer. AI-Generated Music Changes How Hits are Made. The idea that artificial intelligence can compose music is scary for a lot of people, including me. 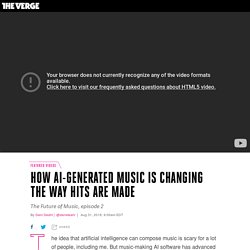 But music-making AI software has advanced so far in the past few years that it’s no longer a frightening novelty; it’s a viable tool that can and is being used by producers to help in the creative process. This raises the question: could artificial intelligence one day replace musicians? For the second episode of The Future of Music, I went to LA to visit the offices of AI platform Amper Music and the home of Taryn Southern, a pop artist who is working with Amper and other AI platforms to co-produce her debut album I AM AI. Using AI as a tool to make music or aid musicians has been in practice for quite some time. Symphonies in Space: Orchestras Embrace VR. Virtual reality technology has allowed people to relive weddings, scale Mount Everest and visit Olympic venues from their living rooms. 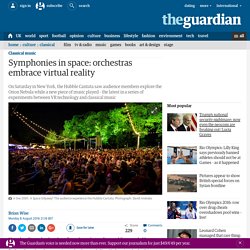 At Brooklyn’s Prospect Park on Saturday, the emerging technology took New Yorkers inside the Orion Nebula, the gaseous cloud of dust and evolving stars some 1,500 light years away. The VR installation was part of the Hubble Cantata, an hour-long composition for orchestra, 100-voice chorus, soloists and narration, by composer Paola Prestini and librettist Royce Vavrek.

Staged at the BRIC Celebrate Brooklyn concert series, the cantata’s climatic moment came in its last five minutes, when audience members were cued to slip their phones into free cardboard VR headsets that were distributed at the gates. How to Travel in your Mind. Théoriz Studio; Bridging Art & Technology. Industrial Robots Move to Centre Stage. As industrial robots continue finding new ways of augmenting people’s abilities in factories, artists from all walks of life continue finding new ways of expressing themselves through robots. 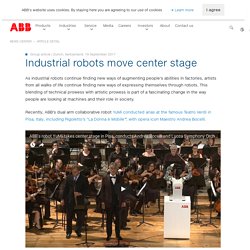 London Artist Taught Robots How to Paint. How can creative industries benefit from blockchain? Five forces of blockchain technology could affect the creative economy. 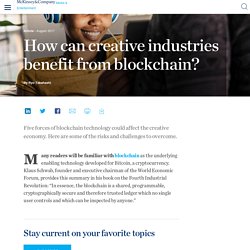 Here are some of the risks and challenges to overcome. Many readers will be familiar with blockchain as the underlying enabling technology developed for Bitcoin, a cryptocurrency. Klaus Schwab, founder and executive chairman of the World Economic Forum, provides this summary in his book on the Fourth Industrial Revolution: “In essence, the blockchain is a shared, programmable, cryptographically secure and therefore trusted ledger which no single user controls and which can be inspected by anyone.” Blockchain has the potential to become a powerful disruptive force. A survey of 800 executives, featured in the same book, suggests 58 percent believe that up to 10 percent of global GDP will be stored using blockchain technology. Blockchain technology may provide several important features that could be leveraged for use in the creative economy: An artist-centric model for blockchain. The Digital Transformation of Museums. Museums are embracing new technologies to better understand their audience and create a broader, more engaged customer base. 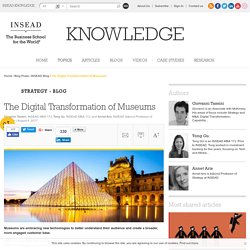 Digital technologies provide a fantastic tool for cultural institutions to democratise access to culture, open a space for dialogue, and promote the exchange of ideas and knowledge. But, it’s not all easy pickings. Faced with changing customer demographics, evolving expectations and an explosion of competing new entertainment options, museums must increase their digital proficiency to offer a more engaging journey for their audience. From the customers’ perspective, the path through a museum is often studded with age-old challenges. Digital technologies can help cultural institutions offer visitors an exceptional experience. Heartcorps Shows Future of Live AR Performance. Historic Art Gets Remixed at Art Gallery. Traditional visual art can be a peaceful escape from the hectic, digital world, but it can also seem a little behind from our modern lives. 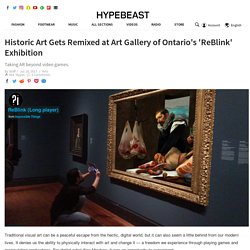 It denies us the ability to physically interact with art and change it — a freedom we experience through playing games and manipulating applications. For digital artist Alex Mayhew, it was an opportunity to experiment. Mayhew, along with Ian Kelso who are both co-founders of the mixed reality studio Impossible Things, have just launch a five month augmented reality installation called ReBlink that remixes historic pieces of art and updates them with modern technologies and products that drive our daily lives. The ReBlink exhibition is on display now through December 3 at the Art Gallery of Ontario. Viewers can enjoy this AR experience by downloading the “ReBlink” app and pointing their devices at select paintings — mainly housed in the Jackman Gallery. REBLINK FOR ART GALLERY OF ONTARIO 317 Dundas Street West, M5T 1G4, Toronto, Ontario, Canada. Cycling Around the UK in VR using Google Street View.