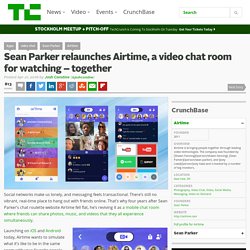 There’s still no vibrant, real-time place to hang out with friends online. That’s why four years after Sean Parker’s chat roulette website Airtime fell flat, he’s reviving it as a mobile chat room where friends can share photos, music, and videos that they all experience simultaneously. Launching on iOS and Android today, Airtime wants to simulate what it’s like to be in the same room with your favorite people, instead of divided by asynchronous News Feeds where we lob Likes at each other. Parker tells me that unlike broadcast social media, “people can have the expectation of privacy, intimacy, and closeness – a kid of humanity rather than everything having to be some form of theater or performance.” At its core, Airtime is about adding 10, 20, or even 50 friends to a room that becomes your persistent third-space online. How to engage your app’s community on social media. So many factors may have worked for making your app popular. 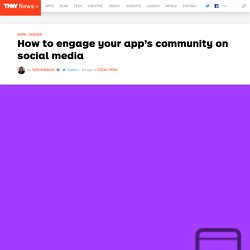 It may have been a great PR campaign, or you hit the right chord with your influencer marketing strategy. The point is that all these viral factors are short-lived. Once the initial buzz dies down, most apps seem to lose their mark with their audience and users. What keeps people coming back? Our best speaker lineup, ever. This year’s edition of TNW Conference in Amsterdam includes some of the biggest names in tech. Learn more. This iPhone App Made Me Love Voice Messages Again. SEETY #mavilleenrose. “Chime” In On Video Chat Threads With This Intimate App. Texting is the quickest way to be misunderstood. 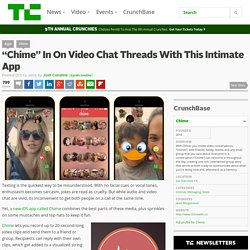 With no facial cues or vocal tones, enthusiasm becomes sarcasm, jokes are read as cruelty. But while audio and video chat are vivid, its inconvenient to get both people on a call at the same time. Yet, a new iOS app called Chime combines the best parts of these media, plus sprinkles on some mustaches and top hats to keep it fun. Chime lets you record up to 20-second-long video clips and send them to a friend or group. Recipients can reply with their own clips, which get added to a visualized string of contributions that can be rewatched. Navigation System Guides You Like a Local. This app crowdsources driving tips, warnings and tricks to make you drive smarter Mapkin is a driving app that can help you get around tricky maze roads like a local. 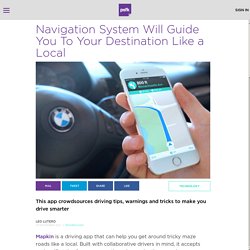 Built with collaborative drivers in mind, it accepts and verifies tips from users so the voice navigation sounds more human than machine. Instead of just saying “Turn right in ten meters”, Mapkin will say “Turn a left at the light, just pass the gas station”. These kind of instructions pay particular attention to things someone behind the wheel might notice instead of what an orbiting satellite might find. People drive using notable landmarks, not lengths, and that’s how Mapkin overtakes a traditional GPS navigator. Aside from replacing the robotic approach used in purely machine-based GPS systems, Mapkin is knowledgable about places. Watch the intro video below: The idea is for Mapkin to provide an experience of having a human area expert riding shotgun wherever you go.

Remember Jelly? Here’s another iPhone app that wants to help with tough decisions. If you’re the type of person who takes an hour to decide what you’re making for dinner or whether you want an iPhone 6s or 6s Plus, Flotsm is for you. 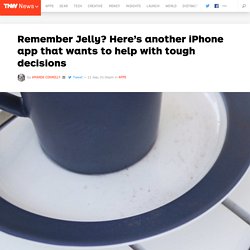 It’s a free iOS app that lets you get unbiased help making tough decisions, as well as lighthearted ones too. And it’s all anonymous. It’s also strikingly similar to the stagnant Jelly, created by Twitter co-founder Biz Stone. Getting started is easy, just sign up with Facebook or your email and ask your first question. All you have to do is decide what you want help with, add multiple answer options, choose an accompanying photo and voilà. Now, if you’re a little shy to begin with (as I was), there are thousands of questions from other users to look through and give your perspective on. Pin & Tucker Shopping App Let's Your Friends Vote On What You Should (Or Shouldn't) Buy. Remember the days of group texting your girlfriends for some much-needed outfit approval or, in some cases, the red flag of disapproval? 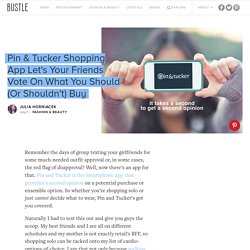 Well, now there’s an app for that. Pin and Tucker is the Smartphone app that provides a second opinion on a potential purchase or ensemble option. So whether you’re shopping solo or just cannot decide what to wear, Pin and Tucker’s got you covered. Naturally I had to test this out and give you guys the scoop. My best friends and I are all on different schedules and my mother is not exactly retail's BFF, so shopping solo can be tacked onto my list of cardio-options-of-choice. It was only a matter of time before our Smartphones became our shopping buddies — and quite honestly, I am pretty jealous that I hadn’t thought of this application myself. Meet Crossroad, A Nifty Little App To Create Collaborative Photo Albums. Chances are you recently went back from a wedding, a road trip or any other meaningful social event, and all your friends took a bunch of photos with their phones. 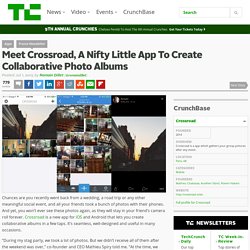 And yet, you won’t ever see these photos again, as they will stay in your friend’s camera roll forever. Crossroad is a new app for iOS and Android that lets you create collaborative albums in a few taps. It’s seamless, well-designed and useful in many occasions. “During my stag party, we took a lot of photos. But we didn’t receive all of them after the weekend was over,” co-founder and CEO Mathieu Spiry told me. BackMeApp by Always. Pedigree Found - the real time lost dog app. Yik Yak - Ride the Yak.