Sosiaalinen media kirjastoammattilaisen työssä. HowStuffWorks - Learn How Everything Works! Instructables - Make, How To, and DIY. Make: Projects How-to Projects Library — Electronics, Arduino, Crafts, Solar, Robots. Wonder How To. How To Do Just About Everything! Science Toy Maker. Cavity magnetron. Magnetron with section removed to exhibit the cavities. 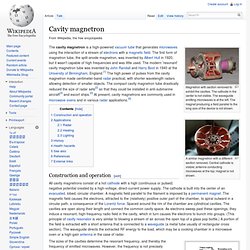 The cathode in the center is not visible. The waveguide emitting microwaves is at the left. The magnet producing a field parallel to the long axis of the device is not shown. A similar magnetron with a different section removed. Central cathode is visible; antenna conducting microwaves at the top; magnet is not shown. Construction and operation[edit] A cross-sectional diagram of a resonant cavity magnetron.

The sizes of the cavities determine the resonant frequency, and thereby the frequency of emitted microwaves. The magnetron is a self-oscillating device requiring no external elements other than a power supply. Where there are an even number of cavities, two concentric rings can connect alternate cavity walls to prevent inefficient modes of oscillation. The magnetron is a fairly efficient device. Applications[edit] Magnetron from a microwave oven with magnet in its mounting box. Radar[edit] Heating[edit] 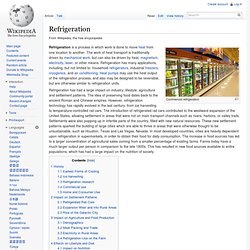 The work of heat transport is traditionally driven by mechanical work, but can also be driven by heat, magnetism, electricity, laser, or other means. Refrigeration has many applications, including, but not limited to: household refrigerators, industrial freezers, cryogenics, and air conditioning. Heat pumps may use the heat output of the refrigeration process, and also may be designed to be reversible, but are otherwise similar to refrigeration units.

Refrigeration has had a large impact on industry, lifestyle, agriculture and settlement patterns. History[edit] Earliest Forms of Cooling[edit] The seasonal harvesting of snow and ice is an ancient practice estimated to have begun earlier than 1000 B.C.[1] A Chinese collection of lyrics from this time period known as the Shih king, describes religious ceremonies for filling and emptying ice cellars. Ice harvesting[edit] Thing in a Jar. Thing in a Jar 7 inches by 4 inches, mason jar Pictured above is the Thing in a Jar that's usually sitting in my office at work. 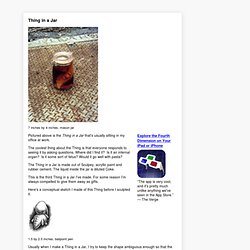 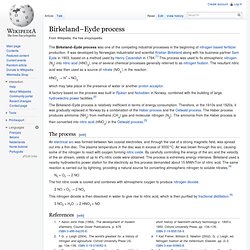 It was developed by Norwegian industrialist and scientist Kristian Birkeland along with his business partner Sam Eyde in 1903, based on a method used by Henry Cavendish in 1784.[1] This process was used to fix atmospheric nitrogen (N2) into nitric acid (HNO3), one of several chemical processes generally referred to as nitrogen fixation. Birkeland-Eyde reactor for making nitric acid. Well thank you! 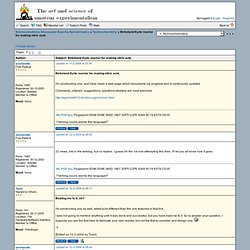 That takes some of the frustration of building 5 non-working reactors before this one away. But my design is NOT better than good. I'm going to do some improvements today: 1) Using larger pots to allow for continous running by eliminating the heat problem. This also allows for longer steel rods, exposing more air to the arc. Edit: I got a pair directly from IKEA, very nice (and EXPENSIVE) pots..... $7 each sigh. Glass Blowing. Soda-lime glass. Reusable soda-lime glass milk bottles Old window made from soda-lime flat glass, Jena, Germany: The distorted reflections of a tree indicates that the flat glass was possibly not made by the float glass process. 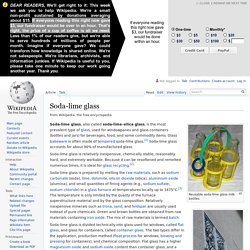 Soda-lime glass, also called soda-lime-silica glass, is the most prevalent type of glass, used for windowpanes and glass containers (bottles and jars) for beverages, food, and some commodity items. Glass bakeware is often made of tempered soda-lime glass.[1] Soda-lime glass accounts for about 90% of manufactured glass. Soda-lime glass is relatively inexpensive, chemically stable, reasonably hard, and extremely workable. Because it can be resoftened and remelted numerous times, it is ideal for glass recycling.[2]

Hydrochloric Acid and Sodium Sulphate. Hydrochloric or muriatic acid is generally made by the action of sulphuric acid on common salt. 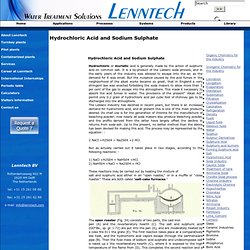 It is a by-product of the Leblanc soda process, and in the early years of the industry was allowed to escape into the air, as the demand for it was small. But the nuisance caused by the acid fumes in the neighborhood of the alkali works became so great, that in England a very stringent law was enacted forbidding the soda makers to allow more than 5 per cent of the gas to escape into the atmosphere. This made it necessary to absorb the acid fumes in water.

The provisions of the present" Alkali Act" permit only 0.2 grain of hydrochloric acid per cubic foot of chimney gas to be discharged into the atmosphere. The Leblanc industry has declined in recent years, but there is an increased demand for hydrochloric acid, and at present this is one of the main products desired. 2 NaCI +H2S04 = Na2S04 +2 HCl. How To Eco-Polish Your Copper Pots With Flour & Vinegar. Cleaning pennies with taco sauce. When I was in high school back in the 80s, I worked at Taco Bell. 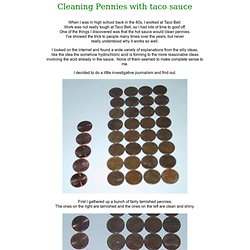 Work was not really tough at Taco Bell, so I had lots of time to goof off. One of the things I discovered was that the hot sauce would clean pennies. I've showed the trick to people many times over the years, but never really understood why it works so well.