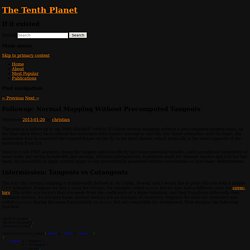 In the time since then I have refined this tech­nique with lessons learned in real life. For those unfa­mil­iar with the topic, the moti­va­tion was to con­struct the tan­gent frame on the fly in the pixel shader, which iron­i­cally is the exact oppo­site of the moti­va­tion from [2]: Programming in Lua (first edition) This is the online version of the first edition of the book Programming in Lua, a detailed and authoritative introduction to all aspects of Lua programming written by Lua's chief architect. 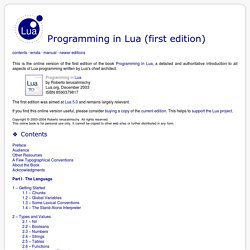 Programming inLuaby Roberto Ierusalimschy Lua.org, December 2003 ISBN 8590379817 The first edition was aimed at Lua 5.0 and remains largely relevant. If you find this online version useful, please consider buying a copy of the current edition. C++ - Why do C programmers use typedefs to rename basic types? Quaternion Maths. Details Category: Knowledge Base Published on 21 May 2012 Written by openscenegraph Hits: 3430 Quaternions describe rotation transformations (at least as far as a SceneGraph is concerned). 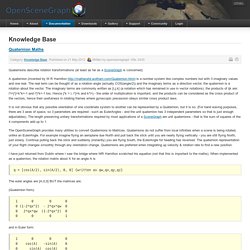 A quaternion (invented by W R Hamilton is a number system like complex numbers but with 3 imaginary values and one real. It is not obvious that any possible orientation of one coordinate system to another can be represented by a Quaternion, but it is so. Code Craft – Embedding C++: Classes. For many embedded C developers the most predominate and questionable feature of C++ is the class. 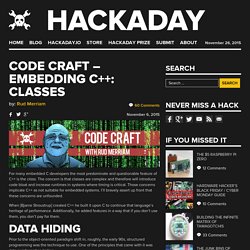 The concern is that classes are complex and therefore will introduce code bloat and increase runtimes in systems where timing is critical. Those concerns implicate C++ as not suitable for embedded systems. I’ll bravely assert up front that these concerns are unfounded. When [Bjarne Stroustrup] created C++ he built it upon C to continue that language’s heritage of performance. Additionally, he added features in a way that if you don’t use them, you don’t pay for them. Openmw/data.cpp at master · OpenMW/openmw. Nifxml/nif.xml at develop · niftools/nifxml. Index. This document outlines the technical details of CPU-based skinning in Gamebryo. 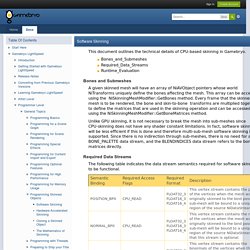 Bones_and_SubmeshesRequired_Data_StreamsRuntime_Evaluation Bones and Submeshes A given skinned mesh will have an array of NiAVObject pointers whose world NiTransforms uniquely define the bones affecting the mesh. This array can be accessed using the NiSkinningMeshModifier::GetBones method. Every frame that the skinned mesh is to be rendered, the bone and skin-to-bone transforms are multiplied together to define the matrices that are used in the skinning operation and can be accessed using the NiSkinningMeshModifier::GetBoneMatrices method. Unlike GPU skinning, it is not necessary to break the mesh into sub-meshes since CPU-skinning does not have any shader constant limitations. Required Data Streams The following table indicates the data stream semantics required for software skinning to be functional. Runtime Evaluation The following UML sequence diagram outlines the execution path of software skinning. BB Drac. Nif is a type of container file with alot of information detailing the structure of your mesh. 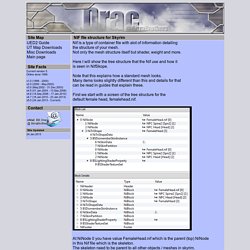 Not only the mesh structure itself but shader, weight and more. Here I will show the tree structure that the Nif use and how it is seen in NifSkope. Note that this explains how a standard mesh looks. View topic - Decode NIF version 30.1.0.3. Game environments – Part A: rendering Remember Me. Sébastien Lagarde of Dontnod Entertainment explores the world of complex game environments especially for accurate wet simulations with a case study on the incredible new game Remember Me. 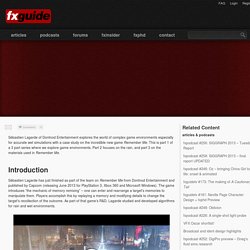 This is part 1 of a 3 part series where we explore game environments. Part 2 focuses on the rain, and part 3 on the materials used in Remember Me. Introduction Sébastien Lagarde has just finished as part of the team on Remember Me from Dontnod Entertainment and published by Capcom (releasing June 2013 for PlayStation 3, Xbox 360 and Microsoft Windows). My-Python-GIS_StackExchange-answers/Python Script for getting elevation difference between two points.md at master · mlaloux/My-Python-GIS_StackExchange-answers. Psi29a/worldsynth.

Free Games Programming Libraries and Game Source Code. Note that following the list of game development frameworks and libraries below is a list of the source code of some famous games. 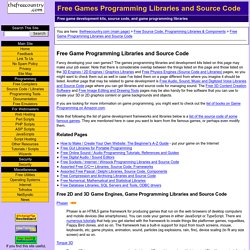 They are mentioned here in case you want to learn from the famous games, or perhaps even modify them. Phaser Phaser is an HTML5 game framework for producing games that run on the web browsers of desktop computers and mobile devices (like smartphones). You can code your games in either JavaScript or TypeScript. There are numerous tutorials that help you get started with the framework to create things like platformer games, roguelikes, Flappy Bird clones, and so on.