Tellem. The Tellem were the people who inhabited the Bandiagara Escarpment in Mali between the eleventh and sixteenth centuries CE.[1] The Dogon people migrated to the escarpment region around the 14th century. 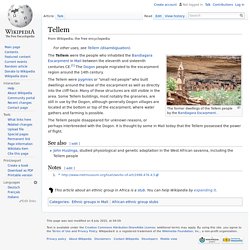 The Tellem were pygmies or "small red people" who built dwellings around the base of the escarpment as well as directly into the cliff-face. Many of these structures are still visible in the area. Some Tellem buildings, most notably the granaries, are still in use by the Dogon, although generally Dogon villages are located at the bottom or top of the escarpment, where water gathers and farming is possible. The Tellem people disappeared for unknown reasons, or perhaps interbreeded with the Dogon. It is thought by some in Mali today that the Tellem possessed the power of flight. See also[edit] John Huizinga, studied physiological and genetic adaptation in the West African savanna, including the Tellem people Notes[edit] Tellem. Pose Tool 3D - Android-sovellukset Google Playssa. Breakthrough figure posing tool for the artist. 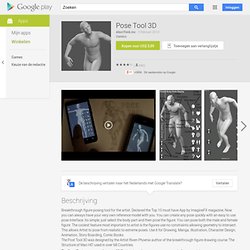 Declared the Top 10 must have App by ImagineFX magazine, Now you can always have your very own reference model with you. You can create any pose quickly with an easy to use pose interface. Its simple, just select the body part and then pose the figure. You can pose both the male and female figure. The coolest feature most important to artist is the figures use no constraints allowing geometry to intersect.

The Most Beautiful Smith in the World (32 pics) » AcidCow.com - Pics | 24 Dec, 2009 | Views: 756996 | Just see the works of Cal Lane.Amazing Do you like it? It is just one of the thousands of posts that we have on the Acidcow.com. Please visit our main page to see other great pictures and videos! Perfect Robot Dance from That Happened! - Video. 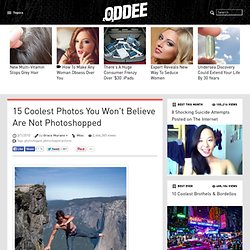 Sleeping on Heaven. Apparently, the model was just jumping! (The left-hand side is a mirror, and the right-hand side is clear glass, with another girl standing on the other side). At the top of 360 feet tall Victoria Falls there is a natural rock pool, called Devil's Pool, where the water is relatively calm. From September to December, when the water level is low, you can swim in Devil's Pool. It looks Photoshopped, but this Magic Tap fountain actually has a pipe hidden in the stream of water. Li Wei Art. This definitely looks photoshopped but actually it's a life-size photographic work based on the original building in Paris, printed on canvas, enhanced with bas-relief. The Human Fly, a dare devil/stunt performer named Rick Rojatt, lives out the Marvel Comics character on the back of a DC-8 cruising low at 250 knots, flown by Clay Lacy at the Mojave California 1000 air races.

Mind bendings. Multifaces. Scientific Curiosity Captured in Photos. Caleb Charland is a Maine-based photographer who combines a love of scientific experiments and photographs into wonderful and amazing photographs. 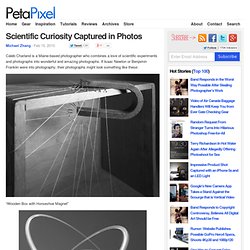 If Isaac Newton or Benjamin Franklin were into photography, their photographs might look something like these: “Wooden Box with Horseshoe Magnet” “Atomic Model” “Demonstration with Hair Dryer and Aluminum Foil” “Candle in a Vortex of Water” “Fifteen Hours” Regarding his work, Charland tells us, Wonder is a state of mind somewhere between knowledge and uncertainty. To check out more of his work, you can visit his website. Image credits: Photographs by Caleb Charland and used with permission. Op art. Op Art Illusion design works that look like op art. 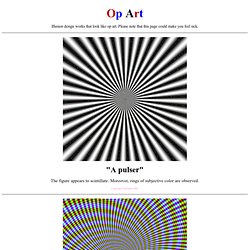 Please note that this page could make you feel sick. "A pulser" The figure appears to scintillate. Moreover, rings of subjective color are observed. Copyright A.Kitaoka 2003 "Mesh spirals" 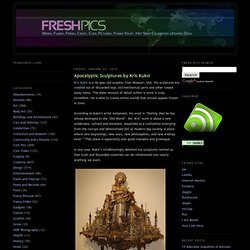 His sculptures are created out of discarded toys, old mechanical parts and other tossed away items. The sheer amount of detail within is work is truly incredible. He is able to create entire worlds that almost appear frozen in time. According to Kuksi’s artist statement, his work is “feeling that he has always belonged to the ‘Old World’. Yet, Kris’ work is about a new wilderness, refined and elevated, visualized as a cultivation emerging from the corrupt and demoralized fall of modern-day society. In any case, Kuksi’s mindblowingly detailed toy sculptures remind us that trash and discarded materials can be refashioned into nearly anything we want. Pictures At Which I Like to Look.