In the Covid-19 Economy, You Can Have a Kid or a Job. You Can’t Have Both. But my family, as a social and economic unit, cannot operate forever in the framework authorities envision for the fall. 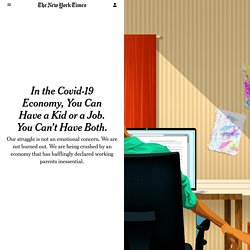 There are so many ways that the situation we’ve been thrust into, in which businesses are planning to reopen without any conversation about the repercussions on families with school-age children, is even more untenable for others. Under the best of circumstances, the impact on children will still be significant. Students will lose most of a year of learning as parents — their new untrained teachers — cannot supervise in any meaningful way while Zooming into the office. La crianza con apego como desafío al capitalismo patriarcal - Beth Richey Counseling: Creative Counseling Interventions. Buenos tratos. Apego, trauma, desarrollo, resiliencia.: Plasticidad del apego: ¿pueden cambiar nuestros primeros patrones infantiles? Con el tiempo que llevamos de blog, son muchos los capítulos que hemos dedicado a este apasionante tema como lo es el apego. 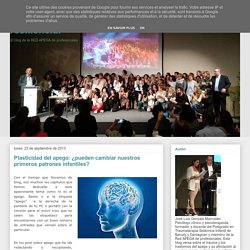 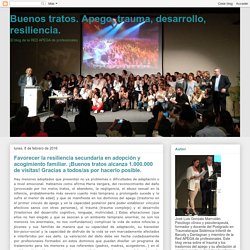 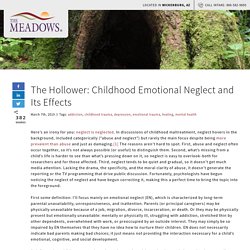 In discussions of childhood maltreatment, neglect hovers in the background, included categorically (“abuse and neglect”) but rarely the main focus despite being more prevalent than abuse and just as damaging.[1] The reasons aren’t hard to spot. First, abuse and neglect often occur together, so it’s not always possible (or useful) to distinguish them. Second, what’s missing from a child’s life is harder to see than what’s pressing down on it, so neglect is easy to overlook–both for researchers and for those affected.

Third, neglect tends to be quiet and gradual, so it doesn’t get much media attention. Lacking the drama, the specificity, and the moral clarity of abuse, it doesn’t generate the reporting or the TV programming that drive public discussion. That Early Childhood Nerd. Mis artículos de crianza favoritos. Schemas in Children’s Play - N a t u r e P l a y. Written by Clare CaroSchemas in Children’s Play are such an important concept when it comes to the development of our children that it’s worth taking the time to understand them so you can facilitate them when you see them.What are these schemas?

Well it’s really a fancy word for the urges that children have to do things like climb, throw things and hide in small places. They appear through play; perhaps it is the way they choose to do things, or what they desperately need to do out of the blue! How young children learn English through play. As we release Learning Time with Timmy – our first app for early-years learners of English – Danitza Villarroel, a teacher on our Learning Time with Shaun and Timmy course in Chile, explains the importance of learning through play, and offers a few tips for teachers new to this age group. Teaching English to pre-school children can be daunting for teachers new to this age group.

Young children have shorter attention spans than older children and adults, and they're still learning their mother tongue. But teaching these learners can be enormously rewarding once you've taken a few basic principles on board. The importance of active learning Active learning means fully involving children in the learning process. Taking Playtime Seriously.

So part of encouraging play is pulling back on how much programmed goal-directed learning we expect from very young children, to leave them time for the fun of exploration, curiosity and, well, fun. The cognitive benefits of play: Effects on the learning brain. © 2008 - 2014, Gwen Dewar, Ph.D., all rights reserved Science supports many of our intuitions about the benefits of play. Playful behavior appears to have positive effects on the brain and on a child’s ability to learn. In fact, play may function as an important, if not crucial, mode for learning.

Want specifics? Here are some examples. Animal experiments: Play improves memory and stimulates the growth of the cerebral cortex In 1964, Marion Diamond and her colleagues published an exciting paper about brain growth in rats. When researchers examined the rats’ brains, they discovered that the “enriched” rats had thicker cerebral cortices than did the “impoverished” rats (Diamond et al 1964). Subsequent research confirmed the results—rats raised stimulating environments had bigger brains. They were smarter, too--able to find their way through mazes more quickly (Greenough and Black 1992). Do these benefits of play extend to humans? BDNF is essential for the growth and maintenance of brain cells. NPR Choice page.

Deconstructing Role Play – Provide the Resources, Step Back and Watch Children’s Learning Flourish. Hospital, vet’s surgery, post office, travel agent – themed role play areas are often seen as a must for an early years setting. They are often meticulously prepared to be aesthetically pleasing, covered in laminated words and pictures with the aim of enticing children in. But this is where I encountered a problem: in these areas, children are expected to come together to play out adult scenarios that are consistent with these themes. Yet how many children have visited a travel agent to book a holiday recently, or operated on a pet dog in a vet’s surgery? For the majority of children, themed areas such as those described above are simply too alien for high-quality cooperative play to develop – which is why I found the children in my class would revert back to playing ‘mums and dads’ by mid-morning, rather than booking a holiday to Costa Rica, as the poster on the wall in the travel agent suggested!

I decided action had to be taken; it was time to improve my role play corner. The benefits. Avenues.