Skeleton Coast. A map of the Namibian homelands. 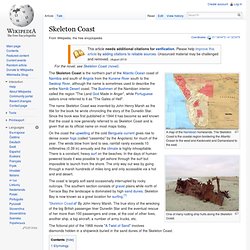 Welcome to KEO. KEO. Is the name of a proposed space time capsule which was to have been launched in 2003 carrying messages from the citizens of present Earth to humanity 50,000 years from now, when it would re-enter Earth's atmosphere. 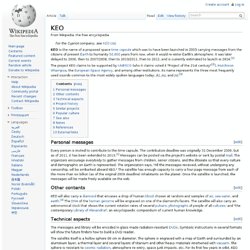 Svalbard Global Seed Vault. The Svalbard Global Seed Vault (Norwegian: Svalbard globale frøhvelv) is a secure seedbank on the Norwegian island of Spitsbergen near Longyearbyen in the remote Arctic Svalbard archipelago, about 1,300 kilometres (810 mi) from the North Pole.[4] Conservationist Cary Fowler, in association with the Consultative Group on International Agricultural Research (CGIAR),[5] started the vault to preserve a wide variety of plant seeds that are duplicate samples, or "spare" copies, of seeds held in gene banks worldwide. 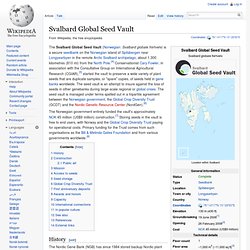 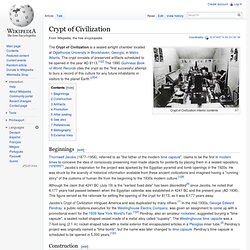 The crypt consists of preserved artifacts scheduled to be opened in the year AD 8113.[1][2] The 1990 Guinness Book of World Records cites the crypt as the "first successful attempt to bury a record of this culture for any future inhabitants or visitors to the planet Earth. "[3][4] Immortality Drive. The intent of the Immortality Drive is to preserve human DNA in a time capsule, in case some global cataclysm should occur on Earth. 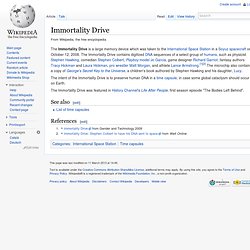 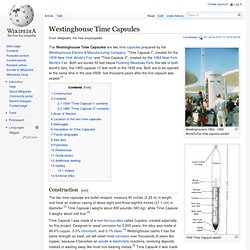 Designed to resist corrosion for 5,000 years, the alloy was made of 99.4% copper, 0.5% chromium, and 0.1% silver.[4] Westinghouse claims it has the same strength as steel, yet will resist most corrosion over thousands of years like copper, because it becomes an anode in electrolytic reactions, receiving deposits instead of wasting away like most iron-bearing metals.[5] Time Capsule II was made of a stainless steel metal called "Kromarc", supplied by U.S. Top 10 Incredible Time Capsules. History I have always loved the concept of time capsules and even made one when I was a kid out of a shoebox and buried it in my backyard. 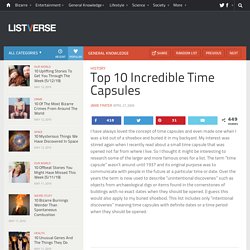 My interest was stirred again when I recently read about a small time capsule that was opened not far from where I live. So I thought it might be interesting to research some of the larger and more famous ones for a list. The term “time capsule” wasn’t around until 1937 and its original purpose was to communicate with people in the future at a particular time or date. Over the years the term is now used to describe “unintentional discoveries” such as objects from archaeological digs or items found in the cornerstones of buildings with no exact dates when they should be opened.