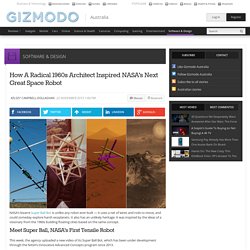 It also has an unlikely heritage: It was inspired by the ideas of a visionary from the 1960s building floating cities based on the same concept. Meet Super Ball, NASA’s First Tensile Robot This week, the agency uploaded a new video of its Super Ball Bot, which has been under development through the NASA’s Innovative Advanced Concepts program since 2013. Please enable JavaScript to watch this video. Alloplastic Architecture suckerPUNCH. Los angeles CALIFORNIA University of Southern California. 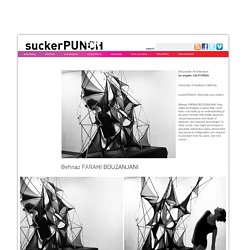 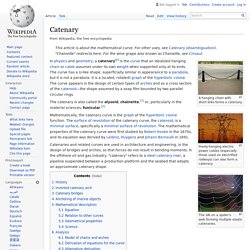 For the wine grape also known as Chainette, see Cinsaut. A hanging chain with short links forms a catenary. Freely-hanging electric power cables (especially those used on electrified railways) can also form a catenary. The silk on a spider's web forming multiple elastic catenaries. In physics and geometry, a catenary[p] is the curve that an idealized hanging chain or cable assumes under its own weight when supported only at its ends. 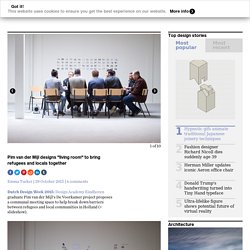 De Voorkamer, meaning the living room, has been designed as a new domestic environment for asylum seekers and locals to socialise, with the aim of helping refugees integrate. Asylum seekers use their own skills and abilities to contribute self-made objects to the space, such as pieces of furniture or textiles, gradually turning it into something resembling a more welcoming living room. "I started by visiting refugee centres," van der Mijl told Dezeen. "I noticed there is this huge gap between the centre and the village around. Design Academy Eindhoven students "respond to crisis" Dutch Design Week 2015: Design Academy Eindhoven has undergone a "paradigm shift" with students now more interested in responding to real-world problems such as Europe's refugee crisis than making beautiful objects for collectors, according to creative director Thomas Widdershoven. 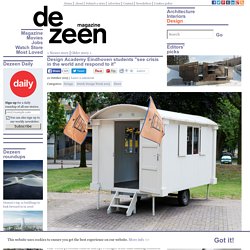 "They used to make collectables for museums," Widdershoven said. Pim van der Mijl designs "living room" for refugees and locals. All Examples - Oxford referencing style - Guides at University of Western Australia. DIY – Sleeping bag liners. One of the best parts of camping, and spending time in the great outdoors is that it can be relatively low in cost. 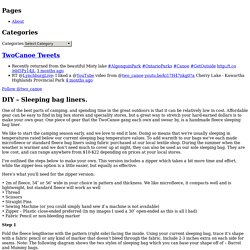 Affordable gear can be easy to find in big box stores and speciality stores, but a great way to stretch your hard-earned dollars is to make your own gear. 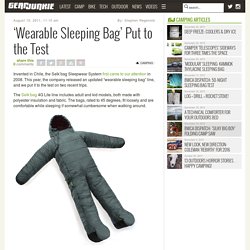 This year, the company released an updated “wearable sleeping bag” line, and we put it to the test on two recent trips. The Selk’bag 4G Lite line includes adult and kid models, both made with polyester insulation and fabric. The bags, rated to 45 degrees, fit loosely and are comfortable while sleeping if somewhat cumbersome when walking around. Selk’bag Sleepwear. Logga in med ditt GU-kort. How do adhesives and glues work? By Chris Woodford. 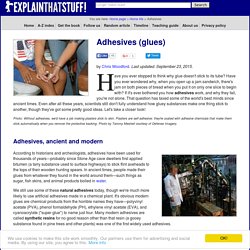 Last updated: September 23, 2015. Engineered proteins stick like glue — even in water. Shellfish such as mussels and barnacles secrete very sticky proteins that help them cling to rocks or ship hulls, even underwater. 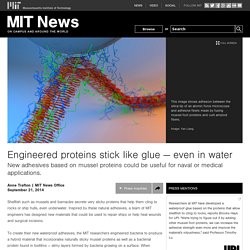 Inspired by these natural adhesives, a team of MIT engineers has designed new materials that could be used to repair ships or help heal wounds and surgical incisions. Future Gear! First Look at Outdoor Equipment for 2014. It’s Outdoor Retailer time again, the twice-annual trade show in Utah where thousands of brands debut new products for the coming sales season. 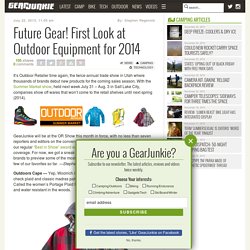 With the Summer Market show, held next week July 31 – Aug. 3 in Salt Lake City, companies show off wares that won’t come to the retail shelves until next spring (2014). GearJunkie will be at the OR Show this month in force, with no less than seven reporters and editors on the convention hall floor, where we’ll be on the hunt for our regular “Best in Show” award winners (link to winter 2013 winners) and coverage. For now, we got a sneak peek and several scoops from more than 50 brands to preview some of the most unique gear that’ll grace the floor.

‘Wearable Sleeping Bag’ Put to the Test. Invented in Chile, the Selk’bag Sleepwear System first came to our attention in 2008. This year, the company released an updated “wearable sleeping bag” line, and we put it to the test on two recent trips. The Selk’bag 4G Lite line includes adult and kid models, both made with polyester insulation and fabric. STEP 3: Homework Instructions. 1. Crochet a plane – 12 x 12. Twelve rows with twelve stitches per row. Detailed diagrams and instructions are in this PDF document:CROCHETING A 12 X 12 PLANE Foundation Row: Crochet 12 chain stitches plus 1 turning chain. Listening Glasses - 4. Clear Vision with Pinhole Glasses - Buy Now - Fast Shipping. Diffuser (Polarizer) Glasses - 5. Pinhole glasses. Pinhole glasses, also known as stenopeic glasses, are eyeglasses with a series of pinhole-sized perforations filling an opaque sheet of plastic in place of each lens.

Similar to the workings of a pinhole camera, each perforation allows only a very narrow beam of light to enter the eye which reduces the size of the circle of confusion on the retina and increases depth of field. In eyes with refractive error, the result is claimed to be a sharper image. However, a second effect may appear at the common bridge between each two adjacent holes, whereby two different rays of light coming from the same object (but each passing through a different hole) are diffracted back toward the eye and onto different places on the retina. Childhood perception - Tuning of perception. Can You so easily tune in to the incredible ease of perception, approximately as in the childhood, without effort and special suggestions, simply voluntarily? Let's look for the answer... We happily or sadly, but sometimes actually to see "all over again" as in the childhood, to find the ease and immediacy of perception. Return to the childhood probably is unlikely if person mentally healthy, but to find a fresh look on the long-known world is real.

Look at an upside down image. Try to understand what it is, considering that for the vision all the conditions of perception is the same. Perceptual narrowing. Perceptual narrowing is a developmental process during which the brain uses environmental experiences to shape perceptual abilities. This process improves the perception of things that people experience often and causes them to experience a decline in the ability to perceive some things to which they are not often exposed.[1][2][3] This phenomenon is a result of neuroplasticity, including Hebbian learning and synaptic pruning.[2] Through these mechanisms, neural pathways that are more consistently used are strengthened, making them more efficient, while those pathways that are unused become less efficient. Make a Periscope with CD Mirrors. Introducing the iCAN — AstroDime Transit Authority. Camps. IN THE EYES OF THE ANIMALS TEASER.

How to Make Paper Speakers From Scratch - 10. Sound Tapestry Installation at the Berkeley Art Museum. Tessellation. Homemade Speakers. Hassell and Draisci Studio create sleeperie to encourage naps. London Festival of Architecture 2015: visitors to this London "sleeperie" can take a 10-minute nap in a colourful sling within a dimly-lit room, where soothing music is played and all technology is banned (+ slideshow). London showroom Sto Werkstatt invited architecture offices Hassell and Draisci Studio to create an interactive exhibition exploring types of architectural spaces that can be used for short-term physical and mental rest. Archrecord2 - Architectural Record - Mafoombey explores the acoustics of cardboard. Architectural acoustics. Architectural acoustics (also known as room acoustics and building acoustics) is the science and engineering of achieving a good sound within a building and is a branch of acoustical engineering.[1] The first application of modern scientific methods to architectural acoustics was carried out by Wallace Sabine in the Fogg Museum lecture room who then applied his new found knowledge to the design of Symphony Hall, Boston.[2] Architectural acoustics can be about achieving good speech intelligibility in a theatre, restaurant or railway station, enhancing the quality of music in a concert hall or recording studio, or suppressing noise to make offices and homes more productive and pleasant places to work and live in.[3] Architectural acoustic design is usually done by acoustic consultants.[4] Building skin envelope[edit]

Dezeen. To mark the release of his debut album Human, which came out last week, techno producer Max Cooper has exclusively shared a binaural mix with us, which features the new album’s lead track Woven Ancestry. Binaural recordings create a 3D sound experience: music seems to come from multiple different directions, as if you were sitting in the room with the musicians. The effect only works if you’re listening with headphones, though. EKKO installation by Thilo Frank. The Hear Heres by Studio Weave. Sonic Seascape Terrace by Decoster-Taivalkoski, Haaslahti and Montes de Oca.

Do I have to know Swedish for studies or getting a job in Sweden? Individuals and employees. Finance, money and banks - Education, University of Gothenburg, Sweden. Thank you for your email and interest. We do not have any summer job opportunity this year. MEDes - Master of European Design. Aalto University - Towards a better world. Aalto University presented by CNBC Europe [FULL 5min] About the tinkering studio. Everyone Deserves Great Design. Social Design. Master of Arts. Linnaeus University - Portfolio Application. Application - Linnaeus University, Sweden - Lnu.se. Apply.aalto.fi - Programme-specific requirements.