Sorrism Themes. Anonymous sent:omfg your themes are gorgeous I love them so much thank you so much for being so wonderful and posting them and letting people use them! 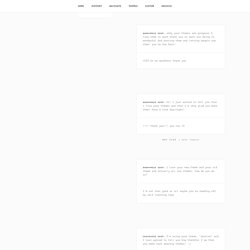 For sale: one Spanish village, free to the right owner. Most who glance at the hamlet of A Barca in northern Spain see only 12 crumbling stone houses that were abandoned decades ago. 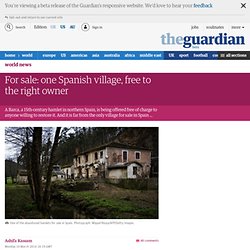 But for one Galician mayor, this hamlet is a yet-to-be-built tourist gem that could revitalise the whole region. That's why he's giving it away for free. The catch, explains Avelino Luis de Francisco Martínez, the mayor of Cortegada, is that the new owner must present a development plan that will preserve every single building in this 15th-century village. "We're hoping they can add value – whether it's building some sort of tourist attraction or a bed and breakfast.

We have an idea of what we want, but we don't have the money. " Nestled into the hills overlooking the Miño river near the Portuguese border, the lush, green hamlet has been empty for more than 40 years, after a Spanish company bought out its residents to build a dam. Martinez started hawking the offer about six month ago. "Ten years ago, businesses were buying," says Canales. Lexicoon: Diccionario y Traductor - Sinónimos, refranes y citas, diccionario español - inglés…

List of Websites Where You Can Watch Spanish Videos with Spanish Subtitles or Transcripts Online. This is the Holy Grail for Spanish-learners: videos (movies, TV shows, whatever) in Spanish and with Spanish (not English) subtitles, or an exact transcript in Spanish of what was said (the two are basically the same). 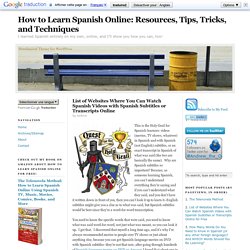 Why are Spanish subtitles so important? Because, as someone learning Spanish, you can’t understand everything they’re saying and if you can’t understand what they said, and you don’t have it written down in front of you, then you can’t look it up to learn it–English subtitles might give you a clue as to what was said, but Spanish subtitles would be best since they’re a word-for-word transcription. You need to know the specific words that were said, you need to know what was said word-for-word, not just what was meant, so you can look it up. I get that. . , I love that movie). How to avoid wasting months learning Spanish the wrong way (and learning the wrong type of Spanish)–get started the right way, learn to talk like native speakers do.

The worst thing that can happen to you, and it happens to thousands of newbie Spanish learners every year (I’ve met several of them), is that you just don’t know how to start off so maybe you try this, that, and the other random method or resource and, of course, that doesn’t work very well and you end up quitting after a few months (at best) of wasted time and effort. 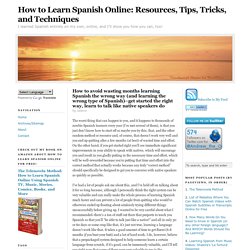 On the other hand, if you get started right you’ll see immediate significant improvements in your ability to speak with natives, which will encourage you and result in you gladly putting in the necessary time and effort, which will be well-rewarded because you’re putting that time and effort into the correct method that actually works because any truly “correct method” should specifically be designed to get you to converse with native speakers as quickly as possible. So what’s the problem with trying to figure this out on my own? Additionally, you want to avoid learning the wrong way of saying things.

How Does It Work? 1. The best movies to learn Spanish. List of Websites Where You Can Watch Spanish Videos with Spanish Subtitles or Transcripts Online. Wild Cat Episode 1 - Watch Full Episodes Free - Venezuela. A young woman loses her innocence after a wealthy ranch heir marries her and then leaves her, but will her jealous vengeance transform her into a wild animal? 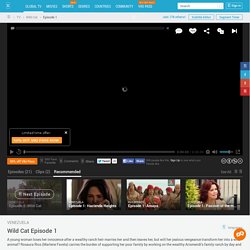 Rosaura Rios (Marlene Favela) carries the burden of supporting her poor family by working on the wealthy Arismendi’s family ranch by day and as a bartender by night. When she saves Luis Mario Arismendi (Mario Cimarro) from a plane crash, she falls in love with him, and they marry. But Eduarda (Mara Croatto), Luis Mario’s sister, wants her brother to marry the beautiful Eva Granados (Carolina Tejera) because her wealth could save their family ranch from financial ruin. As Eduarda and Eva’s evil plans successfully break up Luis Mario and Rosaura’s marriage, Rosaura is left penniless and pregnant. However, a strange twist of fate allows Rosaura to inherit a grandmother’s wealth, and she is transformed into a polished, cold woman who is intent on revenge against the Arismendi family. Destinos. El Pasajero (Spanish with English Subtitles) The Best Spanish Movies with Subtitles to Help You Learn.

Telemundo Novelas. Conjugate Prohibir in Spanish. My Favorite Spanish Words. Ed M Wood When I left university I felt like I was bursting through a set of saloon swing doors, arms loaded with qualifications about to hold up the professional world until they handed over the job of my dreams. 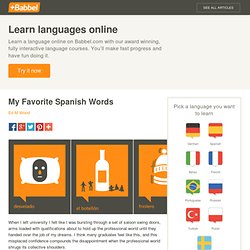 I think many graduates feel like this, and this misplaced confidence compounds the disappointment when the professional world shrugs its collective shoulders. My reaction to this disappointment was to turn my back on the opportunity vacuum and stock up on soft skills. I googled for TEFL courses in Spain, found a charming townlet called Zamora in Castilla y Leon and booked myself a one-way ticket.

My Spanish education, albeit informal, started almost as soon as we touched down. Your relationship with new words is shaped to some extent by the context in which you learn them. The following is a list of my favorite words from two years of part two. 1. You can’t do much with milk in English. The soccer player was running at full speed when one of his opponents hit him on his leg. 2. Test your spanish level! - language test - spanish test.

Learn Spanish: Differences In Por and Para Video. The differences between por and para in Spanish can be difficult to master, since they can be very nuanced. 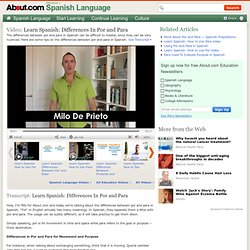 Here are some tips on the differences between por and para in Spanish.See Transcript Hola, I'm Milo for About.com and today we're talking about the differences between por and para in Spanish. "For" in English actually has many meanings. In Spanish, they separate them a little with por and para. The usage can be subtly different, so it will take practice to get them down. Simply speaking, por is for movement in time and space while para refers to the goal or purpose -- think destination. Apócope en español con ejemplos. Ser vs. Estar. One of the most stressful parts of learning Spanish for many language learners, other than the subjunctive and para vs. por, is knowing the difference between ser and estar. 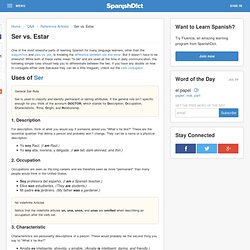 But it doesn´t have to be stressful! While both of these verbs mean "to be" and are used all the time in daily communication, the following simple rules should help you to differentiate between the two. If you have any doubts on how to conjugate either verb (because they can be a little irregular), check out the verb conjugator. Uses of Ser General Ser Rule Ser is used to classify and identify permanent or lasting attributes. 1. For description, think of what you would say if someone asked you "What´s he like?

" Yo soy Raúl. 2. Occupations are seen as life-long careers and are therefore seen as more "permanent" than many people would think in the United States. Soy profesora del español. 3. Por and Para Practice Exercises drill. Spanish grammar to practice para and por. Learn Spanish. English to Spanish Translation, Dictionary, Translator.