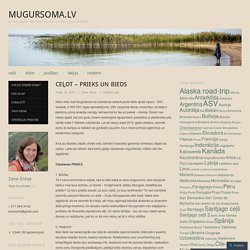 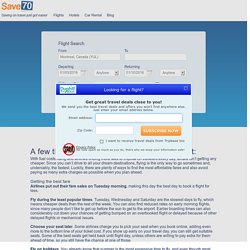 Since you can’t drive to all your dream destinations, flying is the only way to go sometimes and, undeniably, the fastest. Luckily, there are plenty of ways to find the most affordable fares and also avoid paying as many extra charges as possible when you plan ahead. Getting the best fare Airlines put out their fare sales on Tuesday morning, making this day the best day to book a flight for less.

Fly during the least popular times. Untitled. Untitled. Backpacker. How To Find a Cheap Flight - The World Style. The era of dirt-cheap travel is over, and — when the flight can represent the biggest part of your trip expenses — finding that hidden cheap deal can be just as important as finding the right location, the right tour company, the right backpack, or the right place to stay. 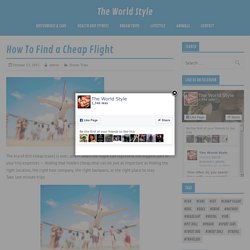 Take last-minute trips Airlines are known to cut prices when they can’t fill planes for an upcoming weekend trip.On Tuesday, they’ll email offers for the coming weekend or following one to fliers who signed up for alerts. Travelers can leave Friday night or anytime Saturday, then return on Monday or Tuesday. Mitrovski Zorancho (@MitrovskiZ) ｟(･)｠ r a d a r . s q u a t . n e t ᴺᴱᵂ. Top 10 European canyons and gorges for walking and hiking trips. Vikos, Greece People don’t often think of Greece as a wilderness, but bears still range through the wooded Vikos in the Pindus mountains of the north-east, and groups of wild boar run amuck through its forests. 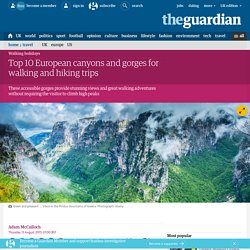 At 20km in length, 1,600 metres deep and with its straight sections topped with uniform limestone precipices, this is an unmistakable canyon. Monodendri makes an excellent starting point and Vikos village a good terminus for a hike that will probably take about six hours. The done thing on arrival in the picturesque stone village of Monodendri is to arrange a taxi to pick you up from Vikos at the end of the day. How Can You Travel the World For Cheap (or Free) - Dreaming and Wandering. Where is the Next Rainbow Gathering? Get Your Map and Directions! There is no official Rainbow site because no one could ever represent the Family. 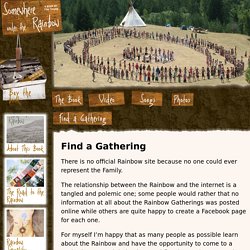 The relationship between the Rainbow and the internet is a tangled and polemic one; some people would rather that no information at all about the Rainbow Gatherings was posted online while others are quite happy to create a Facebook page for each one. For myself I’m happy that as many people as possible learn about the Rainbow and have the opportunity to come to a Gathering, spread their wings and fly. That’s why I wrote the book. I keep a more or less updated calendar of where are the next Rainbow Gatherings. I get my information from friends, searches for Rainbow Gatherings on Facebook and the following sites: Via Hanseatica travel planner. Are you sure you want to delete your unsaved trip? 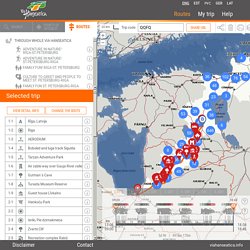 Are you sure you want to load new trip? Your previously composed trip is not saved and will be lost! Are you sure, you want to leave the page? Unsaved trip will be deleted. To save the trip you need to generate a code. 1. 2. HOW TO EARN MONEY WHILE TRAVELING? - Tomislav Perko. Now when you learned how to save a lot of money on costs of transportation and accommodation, here is an article about how to make money on the road. 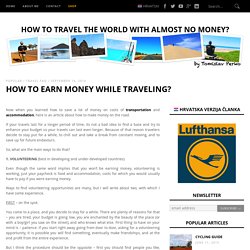 If your travels last for a longer period of time, its not a bad idea to find a base and try to enhance your budget so your travels can last even longer. Because of that reason travelers decide to stay put for a while, to chill out and take a break from constant moving, and to save up for future endavours. So, what are the main ways to do that? Free travel information around the globe. Nomadwiki.org. I was kidnapped - Anick-Marie Bouchard - CRF Travel Safety Awareness. On February 24 2008, around 1 p.m., I was kidnapped. 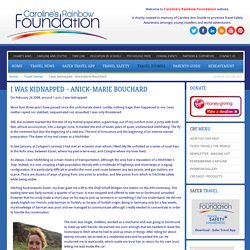 More than three years have passed since this unfortunate event. Luckily, nothing tragic then happened to me. I was neither raped nor stabbed, sequestrated nor assaulted; I was only threatened. Welcome to Marinaleda - The Spanish Anti-Capitalist Town With Equal Wage Full Employment and $19 Housing. By Jade Small / peacefulwarriors.net With virtually no police, crime or unemployment, meet the Spanish town described as a democratic, socialist utopia. 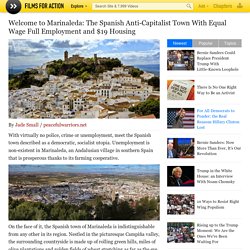 Unemployment is non-existent in Marinaleda, an Andalusian village in southern Spain that is prosperous thanks to its farming cooperative. On the face of it, the Spanish town of Marinaleda is indistinguishable from any other in its region. Nestled in the picturesque Campiña valley, the surrounding countryside is made up of rolling green hills, miles of olive plantations and golden fields of wheat stretching as far as the eye can see. Where to Find Rainbow Gatherings? - Road Junky Guides. Find love somewhere under the Rainbow.. 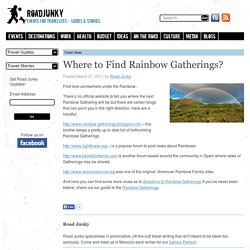 There’s no official website to tell you where the next Rainbow Gathering will be but there are certain blogs that can point you in the right direction. Here are a handful: – this brother keeps a pretty up to date list of forthcoming Rainbow Gatherings. ‘Hitchhiking to India at 20 was a rite of passage for me’ – an Interview with Tom Thumb - Happy Hobos. At 20 years old, Tom Thumb hitchhiked to India without any money and wrote a book about it. He has travelled in over 50 countries and has hitchhiked 20,000km in his ‘career.’ He has witnessed men fighting with machetes in Colombia, had a stranger sleep next to him when he’d found out a foreigner was sleeping outside in Iran and he experienced the extent of human kindness on his hitchhiking journey to India. He now runs meditation and yoga retreats in the Sahara Desert and makes storytelling performances whilst he looks for somewhere to settle.

He is one of the most experienced travellers we’ve had the pleasure of interviewing – we had a chat to find out a little more about what it takes to take travel to the next level. Me: Hi Tom! Will the real reality please stand up! This is a great place to learn and teach about how to use computers anonymously in order to protect yours and others privacy. This group is for both anonymous and LGBT activists to work together and find common ground. Although on the face of it nothing is happening the reality of it is that this is a new crypto currency that is being built by feminists specifically to promote equality. The programmers work on this every day. Is a space for LGBT artists to share their art work. This is mostly just a language exchange group for lesbians and bisexual women even thought it was founded on feminist principles. Falling Fruit. Falling fruit – Feed people, not landfills!

Sources are marked as unverified if their identity, location, or existence is disputed. Many sources imported from tree inventories are marked as unverified because their edibility is uncertain (for example, "Pear" could be either an edible or decorative variety). Users are encouraged to travel to these locations and report their findings. We enforce a taxonomy of edible types to keep the map organized and searchable. Novel types submitted by users are highlighted on the map as pending until they are added to the taxonomy or merged with an existing type. 11 Takeaways From 8 Months of Unemployed Nomadism. One year ago, I was an English teacher in South Korea. My days were spent preparing PowerPoint-supplemented lesson plans and playing English games with groups of hyper-energetic elementary school children. In August of 2014, my teaching contract ended, and thus began an eight-month period of jobless drifting that took me throughout Asia—from South Korea to the Philippines, Indonesia, Singapore, Malaysia, Vietnam, Cambodia, Thailand, and Laos—then back to the United States to Iowa and Nebraska (my roots) for a couple months of seeing family and friends, and finally in March to San Francisco, California, where I am presently living for an indeterminate amount of time.

Posing with my sixth grade students in South Korea during the last week of my year of teaching abroad. Gypset travel – glamorous nomads. Being on perpetual holidays, barefoot and sun-kissed… Impossible? Not quite: there is a handful of people on this planet who seem to actually live this dream life, hopping from one sublime off-the-grid escape to another, on a permanent quest for the endless summer. Who are they? Members of what New York-based journalist Julia Chaplin calls the Gypset (a cross between”gypsy” and “jet-set”), i.e. a crowd of semi-nomadic party enthusiasts who chose to embrace a bohemian lifestyle — in designer clothes. Todos Santos, Mexico. 11 interneta vietnes, kas var būt noderīgas ceļotājiem. Youth Time magazine - #MustUse Online Tools for Low-Cost Traveling. Use a ‘Fake’ Location to Get Cheaper Plane Tickets. Lieux de vie, bases nomade, collectifs, squat, ecolieux.

Skiplagged: The smart way to find cheap flights. Homeless Millennials Are Transforming Hobo Culture. Nine questions about Liberland, the world's newest (possibly fake) country. Last week, the world got a new country: The Free Republic of Liberland, officially founded on April 13th, 2015. There's a new flag, a national anthem, and a provisional government, although it's still not clear whether it's a real country, or how it might become one.

It's all pretty confusing, so we've put together a quick guide to the story so far. What is Liberland? It's a new country, occupying 7 square kilometers of no man's land in southeastern Europe. Barcelona Day Trips for Nature-lovers. TravelFree - Travel Blog - best offers for flights,hotels,tours. Would You Live Like This? Meet Spain’s Nomadic Cave Gypsies [PHOTO ESSAY] Sorina from Romania prepares dinner Granada, Spain There is a fascinating community of people living in Spain who make their homes out of abandoned caves. Join me on a photo tour through Sacromonte’s gypsy neighborhood.

In the hills above the beautiful Spanish city of Granada lies the Roma (gypsy) cave community of Sacromonte. Happy Hobos. ‘Nomads guide to Lisbon’ by Micael Salton. About - Travel and Roll. Road-Tripping Across the Balkans. Wandering. Blog about traveling and volunteering. Our numbers cycling around the world. The Crazy Travel - Bike touring around the world. How it all started - We Are From Latvia. Using Your Scrubba Wash Bag – The Scrubba Wash Bag Australia. HitchHyper. Falling Fruit. Dumpster Diving Map. Dumpster Map - Find other dumpster divers and dumpster locations. Polish Adventures pt 2 - Connection Road Trip - FocallocalFocallocal. 8 Amazing Inexpensive Countries To Live In For A Year.

Cheap holidays, city breaks, flights & hotels. Info and tips for nomads about shoestring budget traveling. Just a girl hitchhiking around... Two tramps eating trash and hitchhiking. Nomadwiki.org. How it is to live with one pair of shorts?