How Coconut Oil May Rescue The Brain From Alzheimer's Disease. Two More Comments from David Wilcock on Ben Fulford’s 10-28-13 Post… From these two newer David’s comments (which came after I posted the earlier comments here): [David Wilcock] “The classic Cabal game is to create elections that put in people they can blame for what they are doing… “Nonetheless, the game always has been that they put people in office who are heavily constrained by bribery, blackmail, threats, murders, extortion and the like. 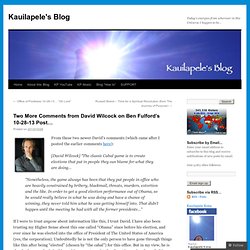 In order to get a good election performance out of Obama, so he would really believe in what he was doing and have a chance of winning, they never told him what he was getting himself into. That didn’t happen until the meeting he had with all the former presidents…” If I were to trust anyone about information like this, I trust David. I have also been trusting my Higher Sense about this one called “Obama” since before his election, and ever since he was elected into the office of President of The United States of America (yes, the corporation). Hold whatever “opinion”, political or otherwise, you wish. . - David. Part 366. As we have already stated, much is about to speed up now, as these incoming fluxes of transformational energy will blast through any barriers still intact after this long period of ceaseless hammering. 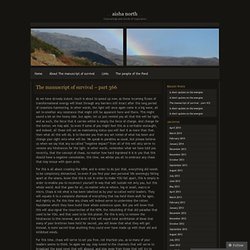 In other words, the light will once again come in a big wave, all set to smother any resistance that might still be apparent here and there. This might sound a bit on the heavy side, but again, let us just remind you all that this will be light, and as such, the force that it carries within is simply the force of change. And change for the better, we may add. So even if some of you might feel this as a veritable onslaught, and indeed, all those still set on maintaining status quo will feel it as more than that, then what all this will do, is to liberate you from any set notion of what has been and change your sight onto what will be.

For this is all about creating the NEW, and in order to do just that, everything old needs to be completely dismantled. Like this: Like Loading... MAKE THIS VIRAL! AION PORTAL ACTIVATION. (Shift of the Ages) It is time to take action again! 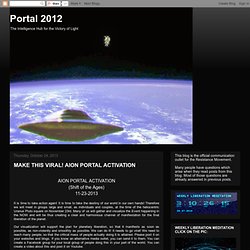 It is time to take the destiny of our world in our own hands! Therefore we will meet in groups large and small, as individuals and couples, at the time of the heliocentric Uranus Pluto square on November 23rd. Many of us will gather and visualize the Event happening in the NOW and will be thus creating a clear and harmonious channel of manifestation for the final liberation of the planet. Our visualization will support the plan for planetary liberation, so that it manifests as soon as possible, as non-violently and smoothly as possible. The time of the AION portal activation signifies the peak of Uranus Pluto square, which is occurring in the 2012-2015 timeframe. At the moment of the activation of the portal, the Galactic Central Sun will send an energy minipulse through the Sun and through the six pointed star mandala of planets.

He will be overseeing our AION activation on planet Earth. Instructions: 1. 2. 3. Victory NOW!