You Really Can Change Your DNA - Here's How. Carolanne Wright, GuestWaking Times If you believe that you are at the mercy of your genetic code, great news, you’re not. 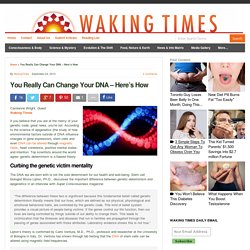 According to the science of epigenetics (the study of how environmental factors outside of DNA influence changes in gene expression), stem cells and even DNA can be altered through magnetic fields, heart coherence, positive mental states and intention. Top scientists around the world agree: genetic determinism is a flawed theory. Curbing the genetic victim mentality The DNA we are born with is not the sole determinant for our health and well-being. “The difference between these two is significant because this fundamental belief called genetic determinism literally means that our lives, which are defined as our physical, physiological and emotional behavioral traits, are controlled by the genetic code.

Lipton’s theory is confirmed by Carlo Ventura, M.D., Ph.D., professor and researcher at the University of Bologna in Italy. “It’s like a time machine. Sources: The Ninja explained by Antony Cummins. Almine on the Lahun Chakra. Toltec School.

Yoga. The Chi Center ~ Beginning Qigong Practice. 8 Simple Movements of Qigong for Beginners by Jake Mace. The ‘Field of Elixir’ Is More Important to Spirituality Than the Pineal Gland : Waking Times. Dylan Charles, EditorWaking Times It is commonly held that the pineal gland is the ‘seat of the soul,’ a meta-physical portal of sorts that is believed to play an important role in conscious awareness and spiritual experience. 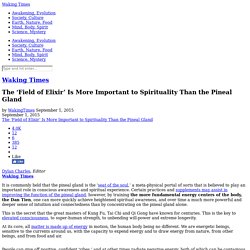 Certain practices and supplements may assist in improving the function of the pineal gland, however, by training the more fundamental energy centers of the body, the Dan Tien, one can more quickly achieve heightened spiritual awareness, and over time a much more powerful and deeper sense of intuition and connectedness than by concentrating on the pineal gland alone.

This is the secret that the great masters of Kung Fu, Tai Chi and Qi Gong have known for centuries. This is the key to elevated consciousness, to super-human strength, to unbending will-power and extreme longevity. At its core, all matter is made up of energy in motion, the human body being no different. Dan Tien – Literally, “Field of Elixir.” “A dantian is simply an energy center. The Five Tibetan Rites of Rejuvenation. James Borges, BorderlandsWaking Times. 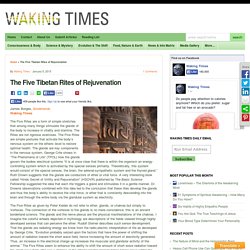 Awakening the Higher Mind of Cellular Consciousness. Peter Borys, Jr, GuestWaking Times As we continue to receive and resonate with the higher dimensional galactic and solar energy that is communicating with the Earth and humanity, we are awakening to Divine awareness. 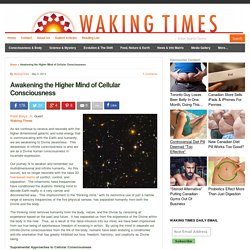 This awareness of infinite consciousness is who we are as a Divine human consciousness in incarnate expression. The Vagus Nerve and the Healing Promise of The Sudarshan Kriya. Frank Huguenard, Staff WriterWaking Times At the center of our bodies resides a long, sinewy nerve that extends all the way from our medullas down through our chests to beyond our stomachs. 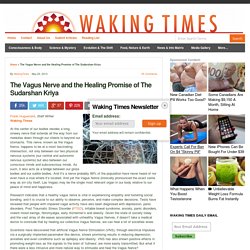 This nerve, known as the Vagus Nerve, happens to be at a most fascinating intersection, not only between our two physical nervous systems (our central and autonomic nervous systems) but also between our conscious minds and subconscious minds. Ten Tips From A Shaolin Monk On How To Stay Young Forever. Shifu Yan LeiWaking Times People always say health is the most important thing but how many people live by this belief? 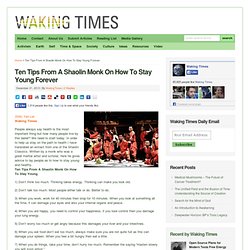 We need to start today. In order to help us stay on the path to health I have translated an extract from one of the Shaolin Classics. Written by a monk who was a great martial artist and scholar, here he gives advice to lay people as to how to stay young and healthy.Ten Tips From A Shaolin Monk On How To Stay Young. Sufi whirling - Sufi path is a way of love. How One Simple Breathing Technique Can Prolong Your Life: Nadi Shodhana. Christina Sarich, ContributorWaking Times In a recent six-year study conducted on over 2800 men from Copenhagen, Denmark, scientists discovered that the resting heart rate has a whole lot to do with the length of our lives. 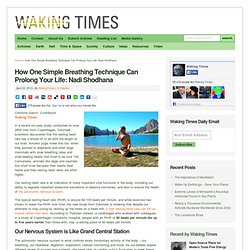 Ancient yogis knew this too, when they pointed to elephants and other large mammals with slow breathing rates and slow-beating hearts that lived to be over 100. Conversely, animals like dogs and squirrels live short lives because their hearts beat faster and their resting heart rates are often higher. Gabrielle Roth - The Calling. Inner Wave Dance by Gabrielle Roth. Qi-Gong South West. Shaking Medicine with Bradford Keeney. Kuan Yin Standing Qigong Part 1 - Sheng Zhen. Kuan Yin Chi Kung Warm up. Culture and arts- Astad Deboo. Dancing to a different drummer: Astad Deboo. To see the man who introduced contemporary dance in India perform live is quite a feat in itself! 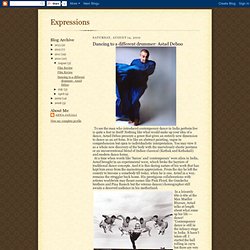 Nothing like what would make up your idea of a dance, Astad Deboo presents a genre that gives an entirely new dimension to dance as an art form. It is like an abstract painting, vague in comprehension but open to individualistic interpretation. You may view it as a whole new discovery of the body with the marvelously elastic postures or an unconventional blend of Indian classical (Kathak and Kathakali) and modern dance forms.

At a time when words like ‘fusion’ and ‘contemporary’ were alien in India, Astad brought in an experimental wave, which broke the barriers of traditional dance concepts.