5 Reasons Modern Art is a Psy-op #NWO #Psyop #soros. A 68 Hour Playlist of Shakespeare’s Plays Being Performed by Great Actors: Gielgud, McKellen & More. A couple of years ago we published a post on "what Shakespeare sounded like to Shakespeare" which highlighted some prominent linguists' attempts to recreate the Elizabethan speech patterns and accents of the playwright's day. 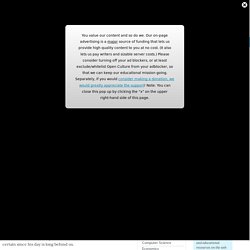 There may be some small debate about whether or not they succeeded, but we'll never know for certain since his day is long behind us. In some ways, the nature of Shakespeare's language may have been more French, or more Latinate, or more Saxon, than the English we speak today—depending on the proportion of regionalisms commingling in any given play, like characters in a national bazaar.