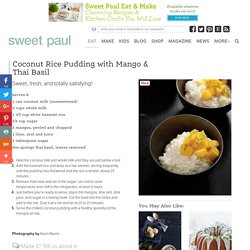 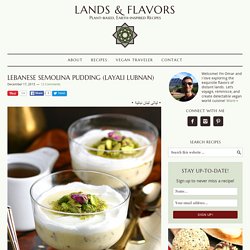 This vegan recipe can whipped up quickly, then it chills in the fridge until you are ready to dig in. Its name directly translating to “Lebanese Nights,” layali lubnan is a ubiquitous and well-loved dessert not only in Lebanon, but throughout the Middle East. At its base is a soft, yet sliceable semolina pudding that’s then covered in cream and finally drizzled with an orange blossom and rose-scented syrup. Noah's Pudding - Superfood: Health Benefits of Barley - Page 16.

Creme Brulee Rice Pudding! Did you know that rice pudding is the traditional holiday dessert of Denmark? 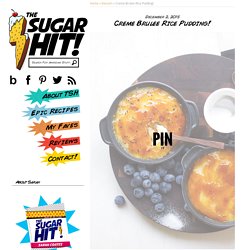 It’s called Risalamande, and usually comes with a tart cherry sauce on top. They play an adorable sounding game where a whole almond is hidden in someone’s bowl, and the winner gets a prize, but they can’t reveal they have the almond until everyone is finished. You thought that was cute, get this: the prize is often a marzipan pig. A pig! Made of marzipan! La Pêche Fraîche. Throw your dreams into space like a kite and you do not know what it will bring back, a new life, a new friend, a new love, a new country. 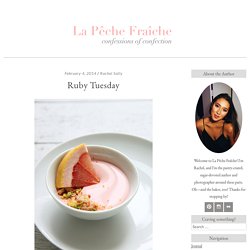 -Anaïs Nin La la lala link love time! Appropriate, because it’s the time of year to share our love and appreciation far and wide. Sounds like Valentine’s day to me already! Food52. Fluffy Tapioca Cream. NAMI-NAMI: a food blog: Recipes: Desserts/Sweets. You'll find the recipe for this wonderfully aromatic and flavoursome apricot sorbet at the end of this post. 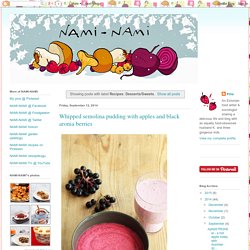 Endomela is a play of three Hebrew words, Ein-Dome-La. The meaning? "Similar to none" or "Unlike no other". This is the name of a small ice cream parlour in Akko (known as Acre in English), a small town in the Western Galilee region of northern Israel. Akko was first mentioned on the tribute-lists of pharaoh Thutmose III in the 16th century BC, and is considered to be one of the oldest continuously inhabited settlements in this part of the world. We visited Akko in the midday heat in the middle of the hot Israeli summer, so it was hard to grasp that the city is a home to some 45 thousand inhabitants. We were in Akko for a reason, of course. Here's Uri Jeremias aka Uri Buri and me in front of his ice cream shop in Akko. Uri scooping some of his lovely ice cream for us. Flans with Muscovado Sauce Recipe on Food52. Slow Cooker Brownie Pudding Cake. Oh, this cake. 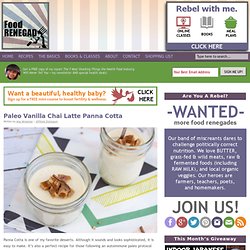 Although it sounds and looks sophisticated, it is easy to make. It’s also a perfect recipe for those following an autoimmune paleo protocol and for those of you that are allergic to eggs. Unexpected Pudding Recipes - Surprising Things to Do with Pudding. OK, so even if you won't publicly admit it, you know you love pudding now just as much as you did when you were 6. 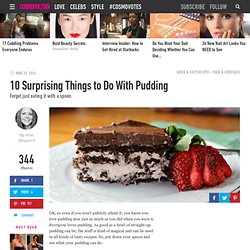 Everyone loves pudding. As good as a bowl of straight-up pudding can be, the stuff is kind of magical and can be used in all kinds of tasty recipes. So, put down your spoon and see what your pudding can do. 1. Pistachio Cheese Ball. Slow Cooker Maple Glazed Pumpkin Bread Pudding. 1 c. pumpkin, canned 1 c. half and half 3/4 c. brown sugar, packed 4 eggs, beaten 1 tsp. vanilla extract 1/2 tsp. ground nutmeg 1/4 tsp. ground cloves 16 oz. cinnamon raisin bread, cut into bite size pieces 2 T. maple syrup 1 T. sugar, confectioners Slow Cooker Maple Glazed Pumpkin Bread Pudding is a dessert that will WOW your guests. 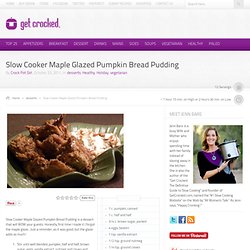 Honestly, first time I made it I forgot the maple glaze.. Easy Chocolate Pudding Recipe. If you're new here, you may want to sign up for FREE weekly updates delivered to your inbox featuring Real Food recipes, nutrition & health articles, and special discounts or promotions. P.S. This post may contain affiliate links to products or services I use, enjoy, or recommend. By making purchases through these links, you are supporting the companies or products I believe in, and you're supporting Food Renegade. Black Sesame Pudding Recipe (Kuro Goma Purin, 黒ごまプリン) Black sesame pudding (Kuro Goma Purin, 黒ごまプリン) may sound a bit strange if you’ve never had sesame seeds in a dessert, but let me promise you that this pudding not only works, but it is divine. 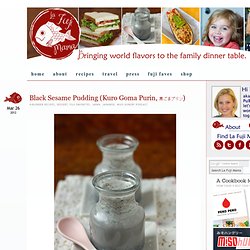 Black sesame seeds are one of the ingredients that I fell in love with when we moved to Japan for the first time 10 years ago. Think of how versatile peanuts are, easily switching from savory dishes to desserts—well sesame seeds are the same. Black sesame seeds, especially after being toasted, are fragrant and nutty and wholly addictive. It’s not surprising that sesame seeds have been used for thousands of years in food preparation—they are delicious. When Allison (Sushiday) and Son came over last month for our Hinamatsuri party, they brought me some black sesame pudding that they had purchased at a Japanese market on their way to my house. Allison and Son mentioned how much they loved the black sesame pudding and I offered to come up with a recipe so they could make it at home. Makes 8 servings. Quinoa Maple Pudding. Since I am nothing if not achingly trendy, I should be a huge proponent of quinoa right? 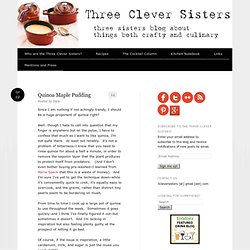 Well…though I hate to call into question that my finger is anywhere but on the pulse, I have to confess that much as I want to like quinoa, I’m not quite there. At least not reliably. It’s not a problem of bitterness–I know that you need to rinse quinoa for about a half a minute, in order to remove the saponin layer that the plant produces to protect itself from predators. (And I don’t even bother buying pre-washed–I learned from Maria Speck that this is a waste of money). And I’m sure I’ve yet to get the technique down–while it’s conveniently quick to cook, it’s equally easy to overcook, and the grains, rather than distinct tiny pearls seem to be bordering on mush.

From time to time I cook up a large pot of quinoa to use throughout the week. Noah's Pudding - Superfood: Health Benefits of Barley - Page 16. Mango Panna Cotta recipe. Aunt Mariah's Lemon Sponge Cups recipe on Food52.com. Crème Brûlée with Caramelized Blood Oranges. If you want a truly magnificent dessert, sure to impress anyone, make this recipe. A thick layer of melt-in-your-mouth vanilla custard is topped with a crackling burnt sugar crust and slices of tart, caramel-coated blood oranges.