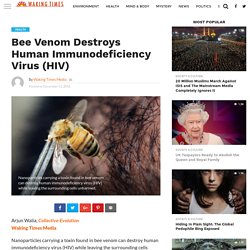 In the Scripps research, some of which was presented at this year’s Conference on Retroviruses and Opportunistic Infections (CROI) in February, the scientists extracted HIV-infected CD4 reservoir cells from nine people with HIV who had been on ART for at least three years. 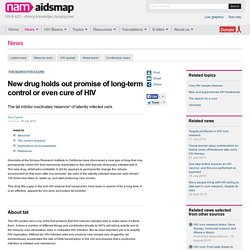 They specifically extracted cells that produced no complete HIV viral particles spontaneously but which readily produced HIV when given immune stimulants. The cells were maintained on ART in the lab dish. Even on ART, infected reservoir cells continue to produce low levels of HIV proteins and have occasional bursts of production of complete viruses; it is these 'blips' that replenish the reservoir. However, when these cells were given dCA, it reduced the amount of p24, a viral core protein indicative of HIV replication, by a mean of 93%. Cancer Drug Could Help Towards HIV Cure. HIV may no longer be a death sentence thanks to sophisticated drug therapies, but a cure continues to elude scientists. 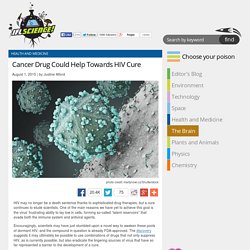 One of the main reasons we have yet to achieve this goal is the virus’ frustrating ability to lay low in cells, forming so-called “latent reservoirs” that evade both the immune system and antiviral agents. Encouragingly, scientists may have just stumbled upon a novel way to awaken these pools of dormant HIV, and the compound in question is already FDA-approved. The discovery suggests it may ultimately be possible to use combinations of drugs that not only suppress HIV, as is currently possible, but also eradicate the lingering sources of virus that have so far represented a barrier to the development of a cure. AIDS CURE - US Patent 5676977.

Molecule Shows Ability to Block AIDS Virus. Scientists have engineered a new molecule they say can block infection with the virus that causes AIDS, a discovery that could lead potentially to a new therapy for patients as well as an alternative to a vaccine. 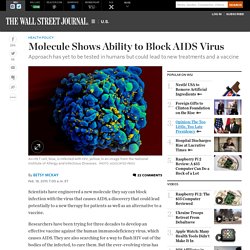 Researchers have been trying for three decades to develop an effective vaccine against the human immunodeficiency virus, which causes AIDS. They are also searching for a way to flush HIV out of the bodies of the infected, to cure them. But the ever-evolving virus has eluded them thus far. Now, a team from the Scripps Research Institute and other institutions says it has identified a new way to prevent HIV from infecting cells, using an approach that resembles gene therapy or transfer.

HIV normally invades the body through two cellular receptors. Because it attaches to both receptors rather than just one, the protein, called eCD4-IG, blocks more HIV strains than any of several powerful antibodies that have been shown to disable the virus, the researchers said. Dr. JAMA Study Confirms: Micronutrients Can Help Prevent the Development of AIDS in HIV-Infected People. 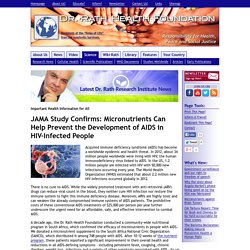 In 2012, about 34 million people worldwide were living with HIV, the human immunodeficiency virus linked to AIDS. In the US, 1.2 million people are infected with HIV with 50,000 new infections occurring every year. The World Health Organization (WHO) estimated that about 2.2 million new HIV infections occurred globally in 2012. There is no cure to AIDS. A decade ago, the Dr. Hsns1405.pdf. 259_role_of_micronutrients_in_the_control_of_hiv_and_aids.pdf. End AIDS! JAMA Study Confirms: Micronutrients Can Help Prevent the Development of AIDS in HIV-Infected People.

Top Tips For Reducing Inflammation In The Body. Most health experts now agree that inflammation is the root cause behind most all chronic illnesses and disease. 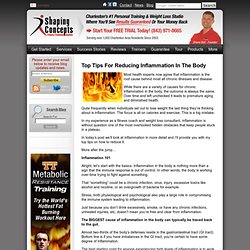 While there are a variety of causes for chronic inflammation in the body, the outcome is always the same. Over time and left unchecked it leads to premature aging and diminished health. Quite frequently when individuals set out to lose weight the last thing they’re thinking about is inflammation. The focus is all on calories and exercise. This is a big mistake. Coconut Oil Cures.

Cheap Coconut Oil Sources [YEA] 11/25/2007: Kimberly from New Braunfels, TX: "I found great source online for organic VCO at half price of my local health food store and they have free shipping. 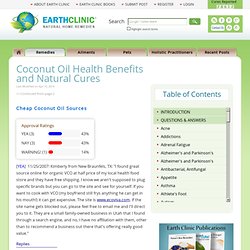 I know we aren't supposed to plug specific brands but you can go to the site and see for yourself. If you want to cook with VCO (my boyfriend still frys anything he can get in his mouth!) It can get expensive. Prints & Patterns on Pinterest. Dr Leonard Horowitz Emerging Viruses AIDS & Ebola Nature, Accident or Intentional YouTube. Com - Phoenix Journals - Journal 65 - The Last Great Plague Upon Man: AIDS And Related Murder Tools.

AIDS ! Natural Treatments for AIDS / HIV. Who Can You Trust? 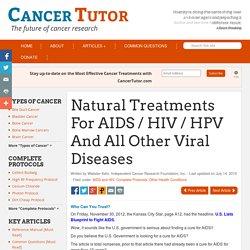 On Friday, November 30, 2012, the Kansas City Star, page A12, had the headline: U.S. Lists Blueprint to Fight AIDS. Wow, it sounds like the U.S. government is serious about finding a cure for AIDS!! Do you believe the U.S. Intestinal Bacteria May Fuel Inflammation and Worsen HIV Disease. I CREATED AIDS to DELIBERATELY DEPOPULATE HUMANITY - Dr Robert Gallo. NASA Space Technology Shines Light on Healing. NASA Space Technology Shines Light on Healing NASA - Dec. 18, 2000 - Doctors at the Medical College of Wisconsin in Milwaukee have discovered the healing power of light with the help of technology developed for NASA's Space Shuttle. 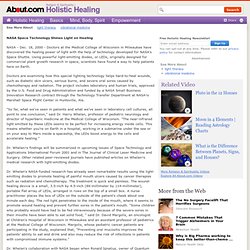 Using powerful light-emitting diodes, or LEDs, originally designed for commercial plant growth research in space, scientists have found a way to help patients here on Earth. Doctors are examining how this special lighting technology helps hard-to-heal wounds, such as diabetic skin ulcers, serious burns, and severe oral sores caused by chemotherapy and radiation. The project includes laboratory and human trials, approved by the U.S. Food and Drug Administration and funded by a NASA Small Business Innovation Research contract through the Technology Transfer Department at NASA¹s Marshall Space Flight Center in Huntsville, Ala. "So far, what we've seen in patients and what we've seen in laboratory cell cultures, all point to one conclusion," said Dr. TheBobBeckProtocol. InvestmentWatch – Chemotherapy Does Not Work 97% Of The Time – 13 August 2013. The Invention Of AIDS.