Forgotten Origin » Steven and Evan Strong's new theory of human civilisation. 1404.ForgedOriginsOfNewTestament. The Anglo-Saxon Chronicle. Online Medieval and Classical Library Release #17 Originally compiled on the orders of King Alfred the Great, approximately A.D. 890, and subsequently maintained and added to by generations of anonymous scribes until the middle of the 12th Century. 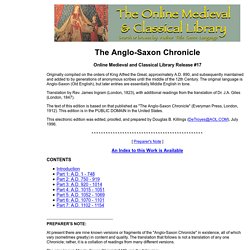 The original language is Anglo-Saxon (Old English), but later entries are essentially Middle English in tone. Translation by Rev. James Ingram (London, 1823), with additional readings from the translation of Dr. J.A. The text of this edition is based on that published as "The Anglo-Saxon Chronicle" (Everyman Press, London, 1912). This electronic edition was edited, proofed, and prepared by Douglas B. . [ Preparer's Note ] An Index to this Work is Available.

Arthurian, templars. Greece, Egypt, Sumer, Atlantis, Lemuria, Creation. Private. Viking, medevial ages, reneaissance. Children of The Matrix - 09. The Dragon Queens If you tell the truth you don't have to remember anything. 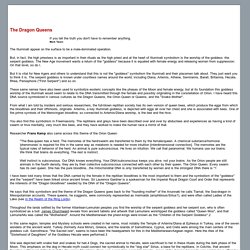 Mark Twain The Illuminati appear on the surface to be a male-dominated operation. The Occult Reptilian Saga - La Saga Oculta de Los Reptilianos. The Windsor-Bush Bloodline. By David Icke I have recently been sent a series of genealogical charts which detail a bloodline and its off shoots that will be highly relevant to the readers of The Biggest Secret. 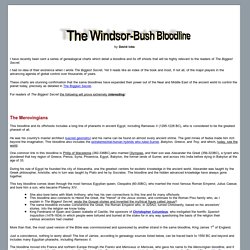 I had no idea of their existence when I wrote The Biggest Secret. Biblical Horrors (FTF Films) Ethan A. Hitchcock (general) In October, 1855, he resigned from the Army following a refusal by Secretary of War Jefferson Davis to extend a four-month leave of absence that he had requested for reasons of health. 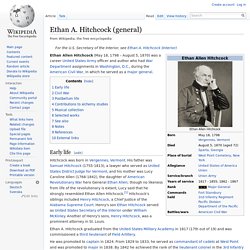 He moved to St. Louis, Missouri, and began a presumed retirement, occupying himself with writing and studies of general literature and philosophy. Hitcocock was a diarist, and his journal entries from this time have served as a crucial source of evidence for Howard Zinn's reinterpretation of United States history, Voices of A People's History of the United States. Hitchcock sat on the court-martial of Maj. Gen. Hitchcock was mustered out in 1867 and moved to Charleston, South Carolina, then to Sparta, Georgia. By the time of his death, Hitchcock had amassed a large private library, including over 250 volumes on the subject of alchemy. SAC 1682-1796. PREVIOUS SAC 1682:1725; Petrine era (Muscovy became empire) 1682je:1689; Sofiia reigned as Regent 1689au27:Nerchinsk Treaty with China 1696:1725; Peter I, the Great 1697:Siberia. 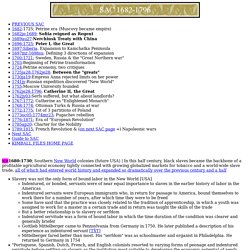 <>1680:1730; Southern New World colonies (future USA) | In this half century, black slaves became the backbone of a profitable agricultural economy tightly connected with growing globalized markets for tobacco and a world-wide slave trade, all of which had entered world history and expanded so dramatically over the previous century and a half. Mansfield Park - Bookmarks - Book Drum. Page 52. 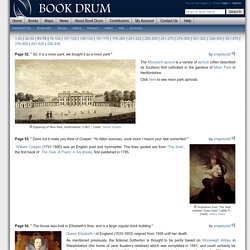 " Sir, it is a moor park, we bought it as a moor park " Engraving of Moor Park, Hertfordshire (1787) - Credit: James Goadby The Moorpark apricot is a variety of apricot (often described as fuzzless) first cultivated in the gardens of Moor Park in Hertfordshire. Click here to see moor park apricots. Page 53 Illustration from 'The Task' entitled 'Crazy Kate' (1806/7) - Credit: Henry Fuseli William Cowper (1731-1800) was an English poet and hymnwriter. Page 54 Queen Elizabeth I of England (1533-1603) reigned from 1558 until her death. As mentioned previously, the fictional Sotherton is thought to be partly based on Stoneleigh Abbey in Warwickshire (the home of Jane Austen's relatives) which was completed in 1561, and could certainly be described as 'a large regular brick building - heavy but respectably looking ...' Complete listing of The Academy for Ancient Texts. Ancient texts library.

HOW THE BRITISH EMPIRE BRAINWASHED THE WORLD. THE MESSAGE – Part Three. Those who worshipped LUCIFER, had a “plan”! 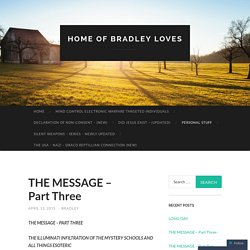 That plan was to eventually take over the entire world…, and to dedicate a ONE WORLD RELIGION to their own master. Lucifer (IN HIS TRUE FORM) has always been a REPTILIAN. In order to do this.., they literally needed to have EVERY SINGLE PIECE of ANCIENT AND ESOTERIC KNOWLEDGE that was ever known and was being “protected” all over the world. World War I…, and World War II were the cover under which those very low vibrational men – Bankers/Illuminati/SatanWorshippers/Ritual Sacrificers….could actually “STEAL” the information that would allow them to actually change the fabric of reality.

After hundreds of years…, they had only managed to “find” remnants of the knowledge and information they sought! This may bring up a question in your mind which is quite reasonable. There is no longer any need to keep it secret – because those from whom it WAS being kept secret, ALREADY HAVE IT. This happened all over CHINA, INDIA, the ORIENT and IN EGYPT! The Velocity of Now March 18, 2015 with Thomas Sheridan.