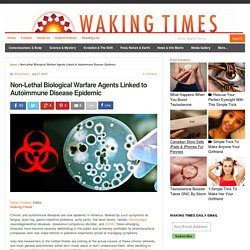 Marked by such symptoms as fatigue, brain fog, gastro-intestinal problems, achy joints, low-level fevers, rashes, fibromyalgia, neurodegenerative diseases, obsessive compulsive disorder, and ADHD, these emerging illnesses have become severely debilitating to the public and extremely profitable for pharmaceutical companies who now make billions in palliative treatments aimed at managing symptoms. Very few researchers in the United States are looking at the actual causes of these chronic ailments, and most general practitioners either don’t know about or don’t understand them, often resulting in the over-prescription of unnecessary and ineffective pharmaceuticals, commonly antidepressants.

His hypothesis: Autoimmune Diseases and Disorders Dr. Are We Infected? She came across Dr. The Possible Cure For All Viruses Using Scalar Energy w/Tom Paladino. NEWS Releases: Dr. Boyd E. Graves' Research & News Archives 1999 - 2009. 1971 Special Virus Flow Chart Download. Turmeric May Neutralize Deadly Viral Infections. Sayer Ji, Green Med InfoWaking Times The global race for an Ebola drug or vaccine is on, with hundreds of millions of dollars of resources invested, but could our best bet already be hiding in plain sight within our spice racks? 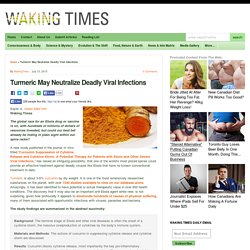 A new study published in the journal In Vivo titled,”Curcumin Suppression of Cytokine Release and Cytokine Storm. A Potential Therapy for Patients with Ebola and Other Severe Viral Infections,” has raised an intriguing possibility: that one of the world’s most prized spices could provide an effective treatment against deadly viruses like Ebola that have no known conventional treatment to date. Scientists Blame Fluoride for Thyroid Issues, Depression, Weight Gain & More. Fluoride Toxicity No Longer a 'Conspiracy Theory' Andy Dilks, Staff WriterWaking Times It’s often amazing how many people still view the dangers posed to health from fluoride in the water supply as nothing more than a “conspiracy theory” – dismissed as a notion unsupported by any solid evidence, they demand peer reviewed studies before even contemplating the veracity of the claim. 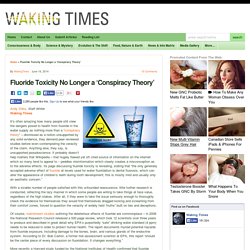 Anything else, they say, is unsupported pseudoscience. It probably doesn’t help matters that Wikipedia – that hugely flawed yet oft cited source of information on the internet which so many tend to appeal to – peddles misinformation which clearly creates a misconception as to the adverse effects. Top Anti-Inflammatory Foods, Herbs, and Spices. Dr. 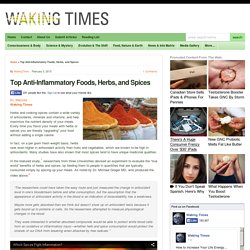 MercolaWaking Times Herbs and cooking spices contain a wide variety of antioxidants, minerals and vitamins, and help maximize the nutrient density of your meals. Every time you flavor your meals with herbs or spices you are literally “upgrading” your food without adding a single calorie. In fact, on a per gram fresh weight basis, herbs rank even higher in antioxidant activity than fruits and vegetables, which are known to be high in antioxidants. Many studies have also shown that most spices tend to have unique medicinal qualities. In the featured study,1 researchers from three Universities devised an experiment to evaluate the “true world” benefits of herbs and spices, by feeding them to people in quantities that are typically consumed simply by spicing up your meals. Four Spices That Pack a Powerful Anti-Inflammatory Punch For one week, 10 to 12 subjects in each of 13 groups consumed a small amount of a particular spice each day.

Other Potent Anti-Inflammatory Spices. MASTER TONIC: Naturally antiviral, anti-bacterial, anti-fungal, anti-parasitic. The Most Powerful Natural Antibiotic Ever – Kills Any Infections in the Body, and is safe for children. 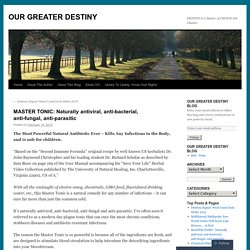 “Based on the “Second Immune Formula” original recipe by well known US herbalists Dr. John Raymond Christopher and his leading student Dr. Richard Schulze as described by Sam Biser on page 169 of the User Manual accompanying his “Save Your Life” Herbal Video Collection published by The University of Natural Healing, Inc. Charlottesville, Virginia 22902, US of A.” With all the onslaught of electro-smog, chemtrails, GMO food, fluoridated drinking water, etc., this Master Tonic is a natural remedy for any number of infections – it can cure far more than just the common cold. Ebola - Pandemi? - UFO og Alternative Teorier - VG Nett Debatt.

The Fraudulent Nature of the Pharmaceutical Investment Industry. Dr. 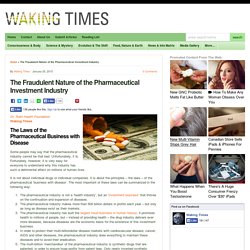 Rath Health FoundationWaking Times The Laws of the Pharmaceutical Business with Disease. 11 Things Guaranteed to Depress Your Immune System. Newly Discovered Virus Can Actually Make Us “Dumber” A new study conducted by the Johns Hopkins Medical School and the University of Nebraska has found a virus, previously thought to live only in freshwater algae, that makes people “dumber” by infecting their brains. 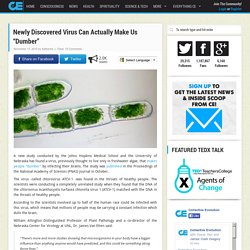 The study was published in the Proceedings of the National Academy of Sciences (PNAS) journal in October. The virus -called chlorovirus ATCV-1 -was found in the throats of healthy people. The scientists were conducting a completely unrelated study when they found that the DNA of the chlorovirus Acanthocystis turfacea chlorella virus 1 (ATCV-1) matched with the DNA in the throats of healthy people. According to the scientists involved up to half of the human race could be infected with this virus, which means that millions of people may be carrying a constant infection which dulls the brain. Deconstructing the Ebola Agenda. Zen Gardner, GuestWaking Times It looks like we’re going to be saddled with this ebola roll-out for a while. 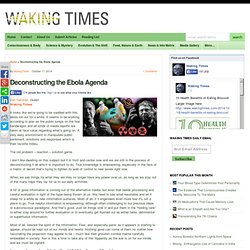 It seems to be working according to plan as the public jumps on the fear bandwagon and all kinds of media reports are taken at face value regarding what’s going on. Episode 6: Antiviral herbal medicines vs. Ebola and other viral pandemics - BioDefense.com.