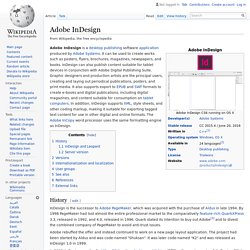 It can be used to create works such as posters, flyers, brochures, magazines, newspapers, and books. InDesign can also publish content suitable for tablet devices in conjunction with Adobe Digital Publishing Suite. Graphic designers and production artists are the principal users, creating and laying out periodical publications, posters, and print media. It also supports export to EPUB and SWF formats to create e-books and digital publications, including digital magazines, and content suitable for consumption on tablet computers. In addition, InDesign supports XML, style sheets, and other coding markup, making it suitable for exporting tagged text content for use in other digital and online formats. History[edit] InDesign is the successor to Adobe PageMaker, which was acquired with the purchase of Aldus in late 1994. In 2002, InDesign was the first Mac OS X-native desktop publishing (DTP) software.

Kickstart (Linux) Kickstart is normally used at sites with many such Linux systems, to allow easy installation[2] and consistent configuration of new computer systems. 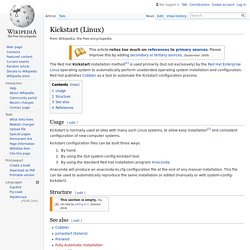 Kickstart configuration files can be built three ways: Anaconda will produce an anaconda-ks.cfg configuration file at the end of any manual installation. This file can be used to automatically reproduce the same installation or edited (manually or with system-config-kickstart). Gnome Connection Manager - A tabbed ssh/telnet connection manager. Davidtv. Thank you very very much to all of you have made donations! 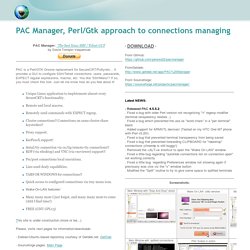 I never thought any "development" of mine could reach that level of acceptance by the Linux community. And thank you so much also for the rest of the people, for just giving PAC a try, and letting me know its faults and its shines. You rule! PAC would have never became what it is now without your participation. I don't know where it'll go from here, but be sure all of you guys, that people like you make the difference. And that's all I wanted to say :) Once again, thank you very very much!! . . . . HyperDex. HyperDex is an open source distributed data store. 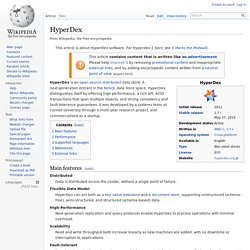 A next-generation entrant in the NoSQL data store space, HyperDex distinguishes itself by offering high performance, a rich API, ACID transactions that span multiple objects, and strong consistency and fault-tolerance guarantees. It was developed by a systems team at Cornell University through a multi-year research project, and commercialized as a startup. Main features[edit] Distributed Data is distributed across the cluster, without a single point of failure. Flexible Data Model. XAP In-Memory Computing software platform for Real Time Event Processing. Valgrind. Valgrind was originally designed to be a free memory debugging tool for Linux on x86, but has since evolved to become a generic framework for creating dynamic analysis tools such as checkers and profilers. 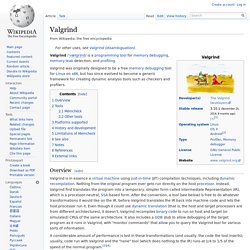 Overview[edit] Valgrind is in essence a virtual machine using just-in-time (JIT) compilation techniques, including dynamic recompilation. Nothing from the original program ever gets run directly on the host processor. Instead, Valgrind first translates the program into a temporary, simpler form called Intermediate Representation (IR), which is a processor-neutral, SSA-based form. After the conversion, a tool (see below) is free to do whatever transformations it would like on the IR, before Valgrind translates the IR back into machine code and lets the host processor run it. Tools[edit] Memcheck[edit] In addition, Memcheck replaces the standard C memory allocator with its own implementation, which also includes memory guards around all allocated blocks (with the A bits set to "invalid"). 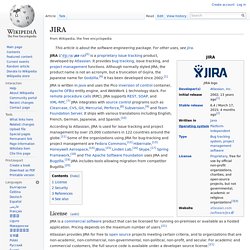 It provides bug tracking, issue tracking, and project management functions. Although normally styled JIRA, the product name is not an acronym, but a truncation of Gojira, the Japanese name for Godzilla.[6] It has been developed since 2002.[1] License[edit] JIRA is a commercial software product that can be licensed for running on-premises or available as a hosted application. Pricing depends on the maximum number of users.[21] 기업 사용자를 위한 크롬 웹스토어 앱 6선. Pipes from duerer. Level Money - The real-time money meter. Screen video capture for Linux. Online screen recorders require Java 1.5 and a supported web-browser: Screencast-O-Matic Freeware based video screen recorder. 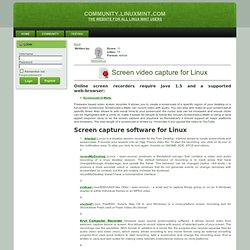 It allows you to create a screencast of a specific region of your desktop or a full-screen screencast. Screencast-o-Matic can record video with audio. You can also add notes to your screencast at specific times. Screen capture software for Linux Istanbul (Linux) is a desktop session recorder for the Free Desktop. Tags: Screen video Created: 1 year ago. Other tutorials from MANIAKua No other tutorials.