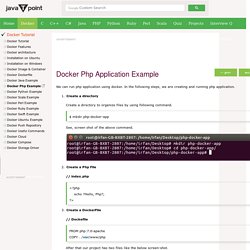 In the following steps, we are creating and running php application. Create a directory Create a directory to organize files by using following command. See, screen shot of the above command. Create a Php File. SFTP Ruby script for downloading files from server - Code Review Stack Exchange. One of the core elements your code is missing is object-orientation. 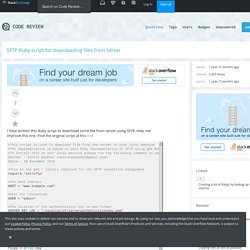 Take advantage of Ruby's powerful object model. That alone will vastly improve what you have. What we're going to do is progressively breakdown everything into chunks of logic and encapsulate these chunks of logic in objects and methods. Before that, let's go through each line and give feedback if anything seems a little off.. #The host address HOST = "www.example.com" It seems you've defined quite a few constants for things which, by nature, will change on a user-by-user basis.

However, if you do replace them with variables, you will not see any real benefit because the code is largely a procedural script. #Array to hold the file names for easier sorting files = Array.new. Extract information from the web with Ruby. Take advantage of web scraping software and website APIs for automated data extraction Websites no longer cater solely to human readers. 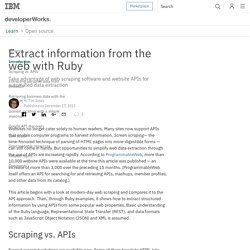 Many sites now support APIs that enable computer programs to harvest information. Screen scraping— the time-honored technique of parsing of HTML pages into more-digestible forms — can still come in handy. But opportunities to simplify web data extraction through the use of APIs are increasing rapidly. According to ProgrammableWeb, more than 10,000 website APIs were available at the time this article was published — an increase of more than 3,000 over the preceding 15 months. This article begins with a look at modern-day web scraping and compares it to the API approach. Ruby for Admins: Config files. In your scripts there is often a need to store the config file, which describes the behaviour of the script, like which files to delete or which servers to ping. 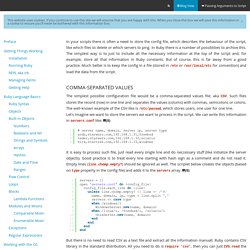 In Ruby there is a number of possiblities to archive this. The simplest way is to just to include all the necessary information at the top of the script and, for example, store all that information in Ruby constants. But of course, this is far away from a good practice. Much better is to keep the config in a file (stored in /etc or /usr/local/etc for convention) and load the data from the script. Comma-Separated Values Serialization (aka Marshalling) is the process of translation the data structures (like Objects in Ruby) to the format, which can be stored outside the program - like in file on disk. Saving Existing Objects to YAML After loading the following file with YAML::load_file you wil get the Array of Server objects. Ruby for Admins: Config files.

Setup Ruby On Rails on Windows 10. Timtilbergon Aug 23, 2016 I was having this same issue and abandoned my attempt. 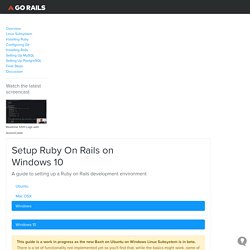 If someone understands what's at hand here, that would be great. For me, that was with several attempts on different machines using my preferred rbenv -- I'm going to try RVM and report back. Chris Oliver(170,420 XP)on Aug 23, 2016 Curious to hear what you find out. Well, I've tossed and reinstalled WSL from scratch, and tried the RVM install instead. Anyway -- I did not encounter the sticky directory issues while using RVM, but I am still having the same issue as above running generators. ```ttilberg@TIMDESKTOP:~/hotdogs$ uname -a && rvm -v && ruby -v && rails -vLinux TIMDESKTOP 3.4.0+ #1 PREEMPT Thu Aug 1 17:06:05 CST 2013 x86_64 x86_64 x86_64 GNU/Linuxrvm 1.27.0 (latest) by Wayne E. Usage: spring COMMAND [ARGS] Commands for spring itself: Comment débuter en Ruby on Rails ? Ruby on Rails. Ruby on Rails Tutorial - Rails for Zombies. Ruby Tutorial - Try Ruby. 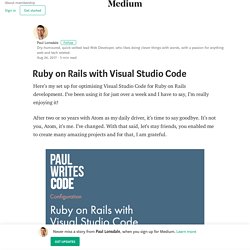 I’ve been using it for just over a week and I have to say, I’m really enjoying it! After two or so years with Atom as my daily driver, it’s time to say goodbye. It’s not you, Atom, it’s me. I’ve changed. With that said, let’s stay friends, you enabled me to create many amazing projects and for that, I am grateful. I originally looked at Visual Studio Code back in the early days, perhaps when I deciding to use Atom full-time.

Here’s my current setup. Theme Before we get started, I use ‘Solarized Dark’. On a Mac, go to ‘Code’ > ‘Preferences’ > ‘Color Theme’ and choose ‘Solarized Dark’. For Windows, replace ‘Code’ with ‘File’. Extensions. Using Visual Studio Code for Ruby Development – Will Velida.