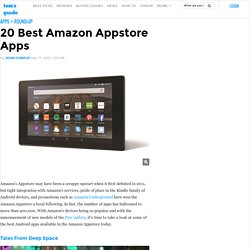 In fact, the number of apps has ballooned to more than 400,000. With Amazon's devices being so popular and with the announcement of new models of the Fire tablets, it's time to take a look at some of the best Android apps available in the Amazon Appstore today. Tales From Deep Space Part of Amazon's push into the mobile gaming field, Tales From Deep Space is a puzzler that puts you in control of traveling salesman E and the luggage drone CASI as they get caught up in a revolution on the Big Moon space station. Kindle Fire Apps Archives - Android CowboyAndroid Cowboy. Amazon Refreshes Kindle Tablet for e-readers, after smartphone failure. Microsoft Surface Tablet. Kindle Fire. Kindle Fire vs. iPad.

Amazon Kindle. Naming and evolution[edit] The Kindle name was devised by branding consultant Michael Cronan who was asked by Lab 126 to name the product. 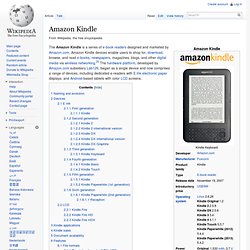 Cronan and partner Karin Hibma suggested Kindle, meaning to light a fire.[3] They felt this was an apt metaphor for reading and intellectual excitement.[4] Kindle hardware has evolved from the original Kindle introduced in 2007 and a Kindle DX line (with a larger screen) introduced in 2009. The range now includes devices with a keyboard (Kindle Keyboard), devices with touch-sensitive screens (Kindle Paperwhite), a tablet computer with a reader app and a color display (Kindle Fire), and a low-priced model with an on-screen keyboard (Kindle). In the last three months of 2010, Amazon announced that in the United States, their e-book sales had surpassed sales of paperback books for the first time.[10] 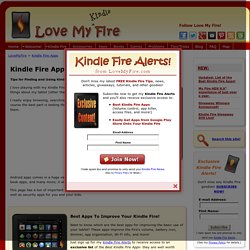 I love playing with my Kindle Fire apps, they are one of my favorite things about my tablet (other than its portable size). I really enjoy browsing, searching, and downloading new apps. Amazon Fire 7in 5th Gen Google Play Store Install and remove lock screen ads Tutorial.