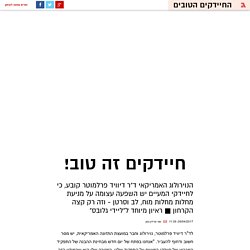 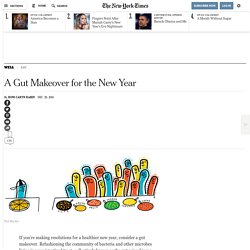 Jeffrey Gordon, the senior author of the new paper and director of the Center for Genome Science and Systems Biology at the Washington University School of Medicine in St. Louis. Nutritional components of a healthy diet have to be viewed from “the inside out,” he said, “not just the outside in.” One of the questions the study set out to answer was how individuals with different diets respond when they try to improve their eating habits.

The scientists harvested gut bacteria from humans, transplanted them into mice bred under sterile conditions, and then fed the mice either American-style or plant-based diets. Earth May Be Home to a Trillion Species of Microbes. Photo According to a new estimate, there are about one trillion species of microbes on , and 99.999 percent of them have yet to be discovered. 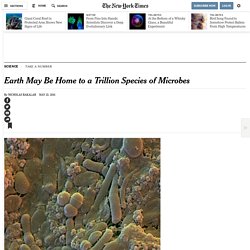 As recently as 1998, the number of microbial species was thought to be a few million at most — little more than the number of insect species. But estimates have been growing ever since. Barnyard Dust Offers a Clue to Stopping Asthma in Children. What was missing was evidence that one essential factor in the environment was protecting children. 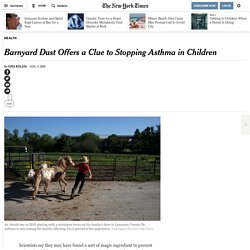 And what was needed was a reason it had exerted its effect. The new study provides this, asthma researchers say, which is what makes its results so spectacular. It is still early. The study was small, and even though its results were striking, more work needs to be done. חיידקים, נגיפים, ושאר "ירקות" - בלוג של ביולוג - ד"ר דרור בר-ניר: חיידקים פרוביוטיים ביוגורט יפים לבריאות - עם כ-140 גביעים ביום אתם מסודרים... Scientists discover gut bacteria that influences mood by ‘eating’ brain chemical. For the first time, scientists have determined that there are bacteria in the human gut which depend on chemicals from our brain for survival. 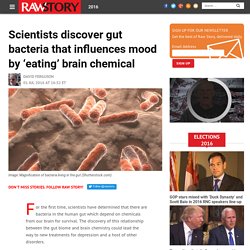 The discovery of this relationship between the gut biome and brain chemistry could lead the way to new treatments for depression and a host of other disorders. New Scientist said Friday that scientists at Boston’s Northeastern University have isolated a group of bacteria that depend upon the brain chemical gamma-aminobutyric acid or GABA — a molecule that the brain uses to calm itself — to survive. Researcher Philip Strandwitz explained that the fact that the newly discovered bacteria — named KLE1738 — appear to eat GABA to live could explain the newly emerging link between gut microbiome health and mental health.

A biome is any system that contains living organisms like a stretch of wetlands or a terrarium in a science class. The microbiome is the teeming mass of 100 trillion bacteria that live inside each person. The Microbiome Solution - Kale and Chocolate. By Elise Museles Have you heard the term microbiome? 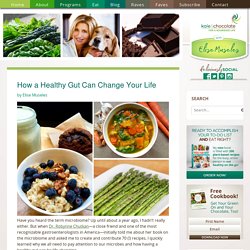 Up until about a year ago, I hadn’t really either. But when Dr. Microbiota, leaky gut syndrome and gut-related diseases. Probiotics. Keynote Speaker: Mary Ellen SandersPresented by The Dannon Company, Inc., and The New York Academy of Sciences Reported by Megan Stephan | Posted October 25, 2010 Overview Probiotics, as defined by the World Health Organization and the Food and Agriculture Organization, are "live microorganisms, which when administered in adequate amounts confer a health benefit on the host. 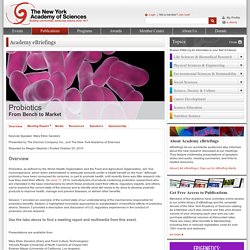 " Although probiotics have been consumed for centuries, in part to promote health, until recently there was little research into how they exert their effects. On June 11, 2010, manufacturers of products containing probiotics, researchers who are interested in the basic mechanisms by which these products exert their effects, regulatory experts, and others, met to examine the current state of the science and to identify what still needs to be done to develop probiotic products to improve health, manage and prevent diseases, or deliver other benefits.

Brain–Gut–Microbe Communication in Health and Disease. Introduction Scientific endeavor is increasingly characterized by a multidisciplinary approach to the study of both health and disease. 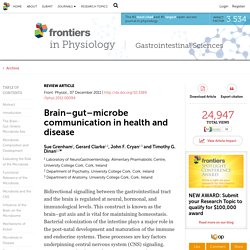 Brain–Gut–Microbe Communication in Health and Disease. נלחמים בחיידקים העמידים. Untitled. Obesity is a growing phenomenon in many industrialized countries [1] and is associated with fatal diseases which are categorized as preventable including heart disease, stroke, type 2 diabetes, and certain types of cancer [2]. 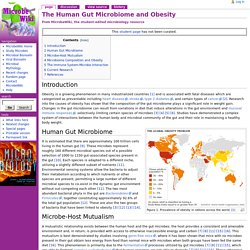 Research into the causes of obesity has shown that the composition of the gut microbiome plays a significant role in weight gain. Changes in the gut microbiome can result from variations in diet that induce alterations in the gut environment and mucosal immune responses, selectively limiting certain species of microbes [3] [4] [5] [6]. There Is No ‘Healthy’ Microbiome. But Mr. 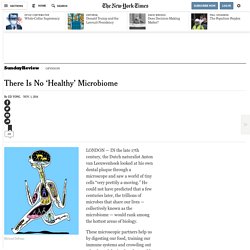 Leach did not have C. difficile. He experimented on himself because he views the Western microbiome as “a hot microbial mess,” he wrote on his blog. 40 Trillion Bacteria on and in Us? Fewer Than We Thought. The Forest In Your Mouth. The study of the human microbiome—the booming and much-hyped quest to understand the microbes that share our bodies—began in the mouth. Specifically, it began with dental plaque. In 1683, Antony van Leeuwenhoek, the first human ever to see bacteria, became the first human ever to see his own bacteria. Untrained as a scholar but insatiably curious, he removed some of the thick plaque at the bottom of his teeth and examined it with his own hand-crafted microscopes. He saw multitudes of living things, “very prettily a-moving”, from spheres that spun like a top to rods that darted through water like fish.

Enthralled, he soon started collecting plaque from the local citizenry and finding similar microbes within. פרפרים בבטן – הכירו את 'המוח השני' ששולט במערכת העיכול שלנו. Soil Bacteria Offer Clues to Curbing Antibiotic Resistance. Right now there is a serious health threat that has the potential to affect anyone, of any age, in any country. A recent report by the World Health Organization (WHO) reveals that antibiotic resistance (when bacteria change in ways that reduce or eliminate the effectiveness of drugs) is no longer a prediction for the future but now a major danger to public health.

“Without urgent, coordinated action by many stakeholders, the world is headed for a post-antibiotic era, in which common infections and minor injuries which have been treatable for decades can once again kill,” warned Dr. Keiji Fukuda, WHO’s Assistant Director-General for Health Security. “Effective antibiotics have been one of the pillars allowing us to live longer, live healthier, and benefit from modern medicine. Hope in the dirt A driving force behind this growing public health threat, say experts, is that bacteria have the ability to share genes that provide antibiotic resistance. 3,000 antibiotic resistant genes.

Forget Fingerprints—in the Future We'll Be Identified by Gut Bacteria. Each of us comes with a unique genetic signature, or genome, containing information about we look like, what diseases we might carry, and who our dads are. The infant gut microbiome: New studies on its origins and how it's knocked out of balance. A fecal sample analysis of 98 Swedish infants over the first year of life found a connection between the development of a child's gut microbiome and the way he or she is delivered. Babies born via C-section had gut bacteria that showed significantly less resemblance to their mothers compared to those that were delivered vaginally. The study, which appears May 11 in Cell Host & Microbe's special issue on "The Host-Microbiota Balance," also found nutrition to be a main driver of infant gut microbiome development--specifically the decision to breast-feed or bottle-feed.

"Our findings surprisingly demonstrated that cessation of breastfeeding, rather than introduction of solid foods, is the major driver in the development of an adult-like microbiota," says lead study author Fredrik Bäckhed of The University of Gothenburg, Sweden. "However, the effect of an altered microbiome early in life on health and disease in adolescence and adulthood remains to be demonstrated.

" Importance of Gut Bacteria for Neurological Disorders. By Dr. Mercola The quality, quantity, and composition of the bacteria in your gut have enormous influence on your brain. Dr. How Gut Bacteria Affects Children's Mood. Ohio State University researchers have found that gut bacteria affect a toddler's temperament. Seres Therapeutics. A central mediator of health. New Microbiome Startup Seres Health Is Developing Bacteria-Filled Pills to Treat Diseases. Should We Bank Our Own Stool?

Photo. Pioneering bacterial therapy for the skin. In our modern world, with the rise of probiotics, DIY cosmetics, no poo products, and other natural skin care solutions, it can be difficult to figure out exactly what is means to live healthy and have healthy skin. Rethink Clean Skin with Mother Dirt: Our Skin Biome. שימור מזון – כבישה, התססה. Dealbook.nytimes. Among New York Subway’s Millions of Riders, a Study Finds Many Mystery Microbes. It’s Buggy Out There. Can the Bacteria in Your Gut Explain Your Mood?