The Imperial Library. “Six are the formulas to heaven by violence, one that you have learned by studying these words.” - Sermon 6 What is a Walking Way? 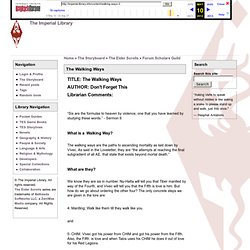 The walking ways are the paths to ascending mortality as laid down by Vivec. As said in the Loveletter, they are “the attempts at reaching the final subgradient of all AE, that state that exists beyond mortal death.” What are they? We know they are six in number. 4: Mantling; Walk like them till they walk like you. and 5: CHIM. That leaves four more ways. 2: “I give you an ancient road tempered by the second walking way. The whole sermon details the Sword, which is part of this walking way. 3: “The third walking path explores hysteria without fear.

Sermon 27, which just as sermon 23 discusses the Second path as a sword discusses the Third path as a word. On Boethiah's Summoning Day. Nigh_thawks. Nerevarine 2E299. Serminuxia: The Marukhati Sermons. Open your eyes to this, the ultimate of the magic worlds. 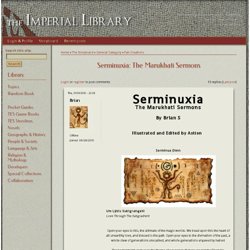 We tread upon this the heart of all unearthly love, and blessed is the path. Open your eyes to the divination of the past, a whole slew of generations unscathed, and whole generations unpaved by hatred. The bestowment upon us is the throne of our power: that we are not the Elven lie, ancestors, or the Mannish lie, children, but are the lesser forms of the Gods, one in between the aforementioned mediums. Thus their potential, of ANU and his one-in-the-same, has been passed down to us in the forms of magic and myth and love. Elder Scrolls Lore. Elder Scrolls. Elder Scrolls Lore. Loranna's RP / FrontPage. Greetings traveler, and welcome to the source guide for the Loranna RP on the Elder Scrolls Lore Forum. 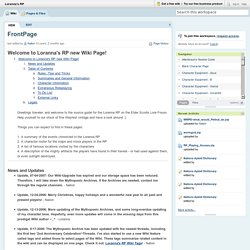 Help yourself to our stock of fine Wayrest vintage and have a look around :) Things you can expect to find in these pages: 1. Mojonation1487. Journals of the Modern Enantiomorph. Thelema. Symbolism, RidingTheBeast.com Meaning and Numerology. This web page treats essentially the symbolism of numbers and their properties. 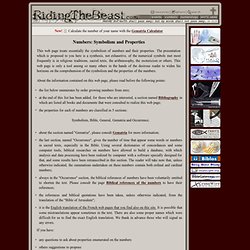 The presentation which is proposed to you here is a synthesis, not exhaustive, of the numerical symbols met most frequently is in religious traditions, sacred texts, the arithmosophy, the esotericism or others. This web page is only a tool among so many others in the hands of the desirous reader to widen his horizons on the comprehension of the symbolism and the properties of the numbers. About the information contained on this web page, please read before the following points: If you have: any questions to ask about properties enumerated on the numbers others suggestions to propose or if you wish to obtain information on a number that does not appear in this list then you are invited to send your questions, remarks and suggestions.

Teachings of the Elk. Oõî«Yéîî~1Ç­Ö½¸âgum¶ŸÅnþï.Mmsp - La Bibliothèque des anciens manuscrits - Wiwiland - Page 2. [“The Confession of Boma Kuro, 143” went from script to final edit, but it was never broadcast for various political reasons. 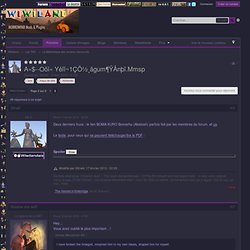 The series has been lauded as the “finest culmination of Hjalti’s nonsense in the Tamriels,” and won the IGSTAST in ­E­­­. Despite harsh criticism from other quarters, “TCI” was otherwise a darling among its audience both at home and in the armchair critiques of the Summerside liberal blogosphere, “full of daring attempts to encapsulate the Septim Empires in an intelligent and titillating serial format”. It was also noteworthy that Emp Zed, the most famous of Imperial Successors of the Second Interregnum was part of the show’s eponymous rebellion. Perhaps even the show creators could not bring themselves to vilify his character or his place in Tamrielic folklore, and so cast him against the Talos Tapestry as a troubled hero. EXT. BOMA KURO (V.O.) EXT. The Governor’s Quarter is the most industrial section of WG­T­One. BOMA KURO (V.O. ­ Memospore. Eyesore. The Dreamsleeve.