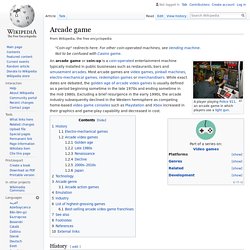 For other coin-operated machines, see Vending machine. An arcade game or coin-op is a coin-operated entertainment machine typically installed in public businesses such as restaurants, bars and amusement arcades. Most arcade games are video games, pinball machines, electro-mechanical games, redemption games or merchandisers. While exact dates are debated, the golden age of arcade video games is usually defined as a period beginning sometime in the late 1970s and ending sometime in the mid-1980s. Excluding a brief resurgence in the early 1990s, the arcade industry subsequently declined in the Western hemisphere as competing home-based video game consoles such as Playstation and Xbox increased in their graphics and game-play capability and decreased in cost. Atari 2600 (1977) The Atari 2600 (or Atari VCS before 1982) is a home video game console by Atari, Inc. 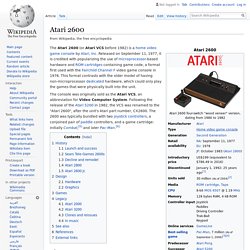 Released on September 11, 1977, it is credited with popularizing the use of microprocessor-based hardware and ROM cartridges containing game code, a format first used with the Fairchild Channel F video game console in 1976. This format contrasts with the older model of having non-microprocessor dedicated hardware, which could only play the games that were physically built into the unit. Nintendo Entertainment System:NES (1985) The Nintendo Entertainment System (commonly abbreviated as NES) is an 8-bit home video game console that was developed and manufactured by Nintendo. 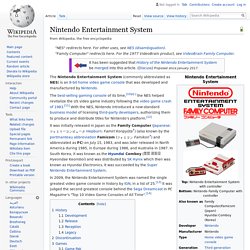 The best-selling gaming console of its time,[10]e[›] the NES helped revitalize the US video game industry following the video game crash of 1983.[11] With the NES, Nintendo introduced a now-standard business model of licensing third-party developers, authorizing them to produce and distribute titles for Nintendo's platform.[12] It was initially released in Japan as the Family Computer (Japanese: ファミリーコンピュータ, Hepburn: Famirī Konpyūta?) Sega Genesis (1989) Designed by an R&D team supervised by Hideki Sato and Masami Ishikawa, the hardware was adapted from Sega's System 16 arcade board, centered on a Motorola 68000 processor as a primary CPU and a Zilog Z80 as a secondary processor. 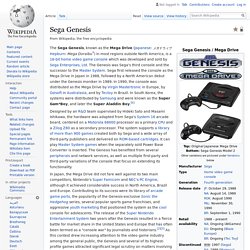 The system supports a library of more than 900 games created both by Sega and a wide array of third-party publishers and delivered on ROM-based cartridges. It can play Master System games when the separately sold Power Base Converter is inserted. The Genesis has benefited from several peripherals and network services, as well as multiple first-party and third-party variations of the console that focus on extending its functionality. History Development.