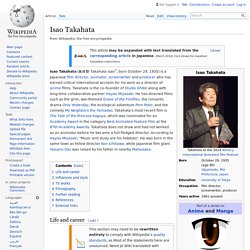 On June 29, 1945 at just nine years old, he survived a major US air raid on Okayama City.[1] Later on in life, after seeing a French animated cartoon feature called Le Roi et l'Oiseau (The King and the Mockingbird) he became intrigued by the animation that was used. [citation needed] He graduated from the University of Tokyo French literature course in 1959. [citation needed] While he was job hunting at his university, Takahata was tempted to join Toei Animation by a friend who knew the company wanted an assistant director.

Grave of the Fireflies. 1988 Japanese animated film directed by Isao Takahata Plot[edit] Incendiary bombs being dropped onto Kobe, the setting of the movie On 21 September 1945, shortly after the end of World War II, a teenage boy, Seita, dies of starvation in a Kobe train station. 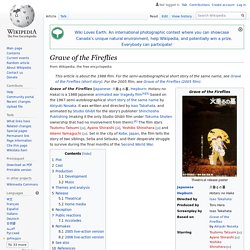 A janitor sorts through his possessions and finds a candy tin, which he throws into a field. The spirit of Seita's younger sister, Setsuko, springs from the tin and is joined by Seita's spirit and a cloud of fireflies. Months earlier, Seita and Setsuko's house is destroyed in a firebombing along with most of Kobe. Seita and Setsuko leave the aunt's home and move into an abandoned bomb shelter. Desperate, Seita withdraws all the money in their mother's bank account. Seita returns to the shelter with food, but finds Setsuko hallucinating. Seita and Setsuko's deceased spirits arrive at their destination, healthy and happy. Cast[edit] Production[edit] Development[edit] Music[edit] The film score was composed by Michio Mamiya. Only Yesterday. Only Yesterday is significant among progressive anime films in that it explores a genre traditionally thought to be outside the realm of animated subjects, in this case a realistic drama written for adults, particularly women. 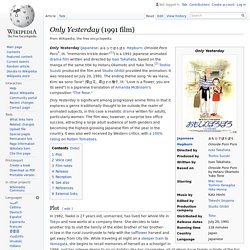 The film was, however, a surprise box office success, attracting a large adult audience of both genders and becoming the highest-grossing Japanese film of the year in the country. It was also well received by Western critics, with a 100% rating on Rotten Tomatoes. In 1982, Taeko is 27 years old, unmarried, has lived her whole life in Tokyo and now works at a company there. She decides to take another trip to visit the family of the elder brother of her brother-in-law in the rural countryside to help with the safflower harvest and get away from city life. At the arrival train station, she is surprised to find out that her brother in law's second cousin, Toshio, whom she barely knows is the one who came to pick her up. From Up on Poppy Hill. From Up on Poppy Hill (Japanese: コクリコ坂から, Hepburn: Kokuriko-zaka Kara? 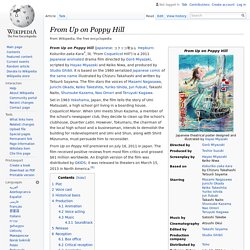 , lit. "From Coquelicot Hill") is a 2011 Japanese animated drama film directed by Gorō Miyazaki, scripted by Hayao Miyazaki and Keiko Niwa, and produced by Studio Ghibli. It is based on the 1980 serialized Japanese comic of the same name illustrated by Chizuru Takahashi and written by Tetsurō Sayama. The Tale of the Princess Kaguya. The Tale of the Princess Kaguya (Japanese: かぐや姫の物語, Hepburn: Kaguya-hime no Monogatari?) 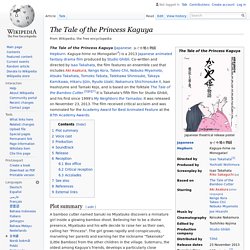 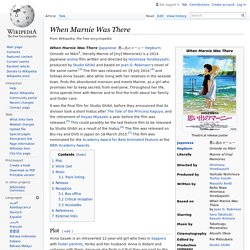 , literally Marnie of [my] Memories) is a 2014 Japanese anime film written and directed by Hiromasa Yonebayashi, produced by Studio Ghibli and based on Joan G. Robinson's novel of the same name.[3] The film was released on 19 July 2014,[4] and follows Anna Sasaki, who while living with her relatives in the seaside town, finds the abandoned mansion and meets Marnie, as a girl who promises her to keep secrets from everyone. Throughout her life, Anna spends time with Marnie and to find the truth about her family and foster care. Plot[edit] Anna sees an abandoned mansion, dilapidated and overgrown, across a salt marsh and wades across the marsh to investigate it. On the night of the Tanabata festival, Anna fights with Nobuko Kadoya about her blue eyes, an unusual feature which Anna cannot explain because she does not know who her biological family is.