Through a career that has spanned five decades, Miyazaki has attained international acclaim as a masterful storyteller and as a maker of anime feature films and, along with Isao Takahata, co-founded Studio Ghibli, a film and animation studio. The success of Miyazaki's films has invited comparisons with American animator Walt Disney, and American directors Steven Spielberg and Orson Welles. Hayao Miyazaki. The Castle of Cagliostro. The Castle of Cagliostro (Japanese: ルパン三世 カリオストロの城, Hepburn: Rupan Sansei: Kariosutoro no Shiro? 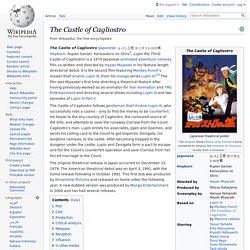 , Lupin the Third: Castle of Cagliostro) is a 1979 Japanese animated adventure comedy film co-written and directed by Hayao Miyazaki in his feature-length directorial debut. It is the second film featuring Monkey Punch's master thief Arsène Lupin III, from his manga series Lupin III.[2] The film was Miyazaki's first time directing a theatrical feature after having previously worked as an animator for Toei Animation and TMS Entertainment and directing several shows including Lupin III and two episodes of Lupin III Part II. The Castle of Cagliostro follows gentleman thief Arsène Lupin III, who successfully robs a casino – only to find the money to be counterfeit. 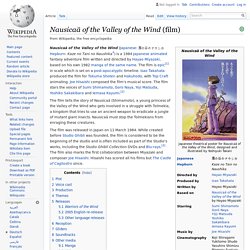 Nausicaä must stop the Tolmekians from enraging these creatures. The next morning, Tolmekian troops, led by Princess Kushana and Officer Kurotowa, kill Nausicaä's father and take the Giant Warrior embryo. Kushana plans to mature the Giant Warrior and use it to burn the Toxic Jungle. Nausicaä kills several Tolmekian soldiers before Yupa intervenes. Kushana announces her decision to leave for Pejite with Nausicaä and five hostages from the Valley.

An agile Pejite interceptor shoots down the Tolmekian ship carrying Kushana and her detachment. Nausicaä and Asbel return to Pejite but find the capital ravaged by insects. Nausicaä liberates the baby Ohm and gains its trust. Box art of the American Warriors of the Wind dub. Napier, Susan J. (1998). Laputa: Castle in the Sky. My Neighbor Totoro. My Neighbor Totoro (Japanese: となりのトトロ, Hepburn: Tonari no Totoro?) 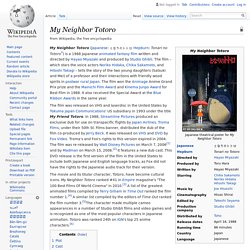 Is a 1988 Japanese animated fantasy film written and directed by Hayao Miyazaki and produced by Studio Ghibli. The film – which stars the voice actors Noriko Hidaka, Chika Sakamoto, and Hitoshi Takagi – tells the story of the two young daughters (Satsuki and Mei) of a professor and their interactions with friendly wood spirits in postwar rural Japan. The film won the Animage Anime Grand Prix prize and the Mainichi Film Award and Kinema Junpo Award for Best Film in 1988.

It also received the Special Award at the Blue Ribbon Awards in the same year. The film was released on VHS and laserdisc in the United States by Tokuma Japan Communications' US subsidiary in 1993 under the title My Friend Totoro. Plot In 1958 Japan, university professor Tatsuo Kusakabe and his two daughters, Satsuki and Mei, move into an old house to be closer to the hospital where their mother Yasuko is recovering from a long-term illness. Cast Production. Kiki's Delivery Service. Plot[edit] Thirteen-year-old trainee witch Kiki leaves home with her talking black cat Jiji. 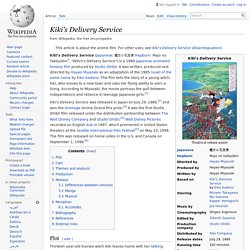 She flies on her broomstick to the port city of Koriko. While trying to find somewhere to live, Kiki is pursued by Tombo, a geeky boy obsessed with aviation who admires her flying ability. Porco Rosso. The plot revolves around an Italian World War I ex-fighter ace, now living as a freelance bounty hunter chasing "air pirates" in the Adriatic Sea. 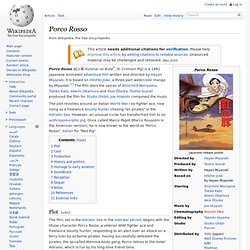 However, an unusual curse has transformed him to an anthropomorphic pig. Once called Marco Pagot (Marco Rousolini in the American version), he is now known to the world as "Porco Rosso", Italian for "Red Pig". Plot[edit] On Your Mark. The music video follows two policemen who raid a religious cult and find an angelic being only to have her taken away and confined to a laboratory. 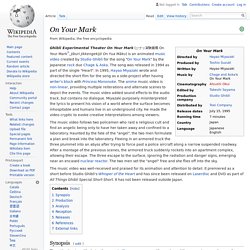 Haunted by the fate of the "angel", the two men formulate a plan and break into the laboratory. Fleeing in an armored truck the three plummet into an abyss after trying to force past a police aircraft along a narrow suspended roadway. Princess Mononoke. Princess Mononoke is set in the late Muromachi period (approximately 1336 to 1573) of Japan with fantasy elements. 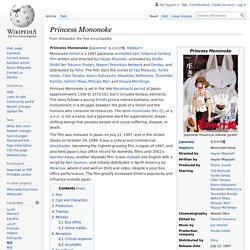 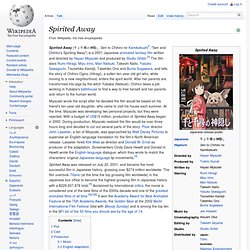 , "Sen and Chihiro's Spiriting Away") is a 2001 Japanese animated fantasy film written and directed by Hayao Miyazaki and produced by Studio Ghibli.[3] The film stars Rumi Hiiragi, Miyu Irino, Mari Natsuki, Takeshi Naito, Yasuko Sawaguchi, Tsunehiko Kamijō, Takehiko Ono and Bunta Sugawara, and tells the story of Chihiro Ogino (Hiiragi), a sullen ten-year-old girl who, while moving to a new neighborhood, enters the spirit world. After her parents are transformed into pigs by the witch Yubaba (Natsuki), Chihiro takes a job working in Yubaba's bathhouse to find a way to free herself and her parents and return to the human world.

Miyazaki wrote the script after he decided the film would be based on his friend's ten-year-old daughter, who came to visit his house each summer. At the time, Miyazaki was developing two personal projects, but they were rejected. With a budget of US$15 million, production of Spirited Away began in 2000.

Howl's Moving Castle. Meanwhile, Sophie's country is caught up in a war with a neighboring country, following the mysterious disappearance of the other country's Crown Prince. 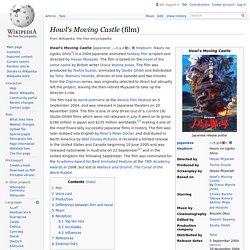 The King summons Howl (Pendragon and Jenkins) to fight in the war. However, Howl decides to send Sophie to the King under the pretense of being his mother, to profess the cowardice of one of Howl's two aliases. Before leaving, he gives to Sophie a charmed ring that connects her to Calcifer. He also assures her that he will follow her to the palace in disguise. Ponyo. Ponyo (Japanese: 崖の上のポニョ, Hepburn: Gake no Ue no Ponyo? 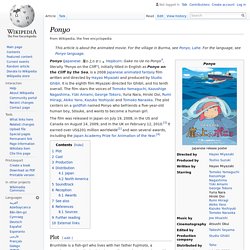 The Borrower Arrietty. Ghibli announced the film in late 2009 with Yonebayashi making his directorial debut. Miyazaki supervised the production as a developing planner.[2] The voice actors were approached in April 2010, and Cécile Corbel wrote the film's score as well as its theme song. Plot[edit] A boy named Shō (Shawn in the Disney dub) tells the audience he still remembers the week in summer he spent at his mother's childhood home with his maternal great aunt, Sadako (Jessica in the Disney dub), and the house maid, Haru. When Shō arrives at the house on the first day, he sees a cat, Niya, trying to attack something in the bushes but it gives up after it is attacked by a crow.

Shō gets a glimpse of Arrietty, a young Borrower girl, returning to her home through an underground air vent. The Wind Rises. The Wind Rises (Japanese: 風立ちぬ, Hepburn: Kaze Tachinu?) Is a 2013 Japanese animated historical drama film written and directed by Hayao Miyazaki and animated by Studio Ghibli. It was released by Toho on July 20, 2013 in Japan, and by Touchstone Pictures in North America on February 21, 2014.[6][7] The Wind Rises is a fictionalized biopic of Jiro Horikoshi (1903–1982), designer of the Mitsubishi A5M fighter aircraft and its successor, the Mitsubishi A6M Zero, used by the Empire of Japan during World War II.