Graphic Novel – A medium in which text is both accompanied and complimented by art, oftentimes to a degree in which neither elements can stand alone and tell a story.

Naoki Urasawa. Inio Asano. Junji Ito. The Sandman. The Sandman was advertised as "a horror-edged fantasy set in the DC Universe" in most of DC's comics dated Holiday 1988. 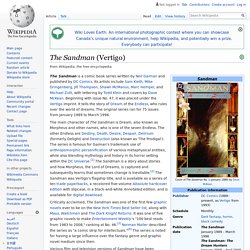 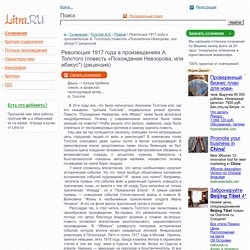 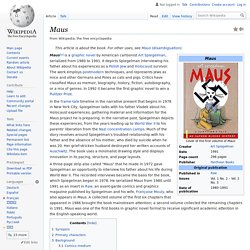 It depicts Spiegelman interviewing his father about his experiences as a Polish Jew and Holocaust survivor. The work deploys postmodern techniques and represents Jews as mice and other Germans and Poles as cats and pigs. Critics have classified Maus as memoir, biography, history, fiction, autobiography, or a mix of genres. In 1992 it became the first graphic novel to win a Pulitzer Prize. 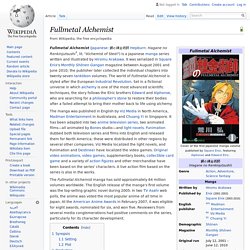 , lit. "Alchemist of Steel") is a Japanese manga series written and illustrated by Hiromu Arakawa. It was serialized in Square Enix's Monthly Shōnen Gangan magazine between August 2001 and June 2010; the publisher later collected the individual chapters into twenty-seven tankōbon volumes. The world of Fullmetal Alchemist is styled after the European Industrial Revolution. Set in a fictional universe in which alchemy is one of the most advanced scientific techniques, the story follows the Elric brothers Edward and Alphonse, who are searching for a philosopher's stone to restore their bodies after a failed attempt to bring their mother back to life using alchemy.

The Fullmetal Alchemist manga has sold approximately 64 million volumes worldwide. Synopsis[edit] Setting[edit] Takehiko Inoue. It has been serialized in Weekly Morning magazine since 1998, with the chapters collected into 37 tankōbon volumes by Kodansha as of July 2014. 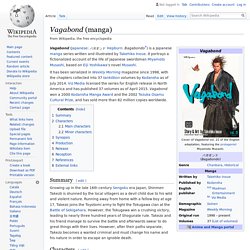 Viz Media licensed the series for English release in North America and has published 37 volumes as of April 2015. Vagabond won a 2000 Kodansha Manga Award and the 2002 Tezuka Osamu Cultural Prize, and has sold more than 82 million copies worldwide. Garth Ennis. The series consists of 75 issues in total - 66 regular, monthly issues, five one-shot specials and a four-issue Preacher: Saint of Killers limited series. 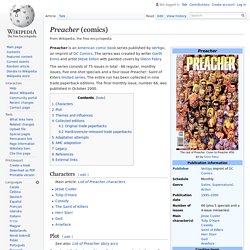 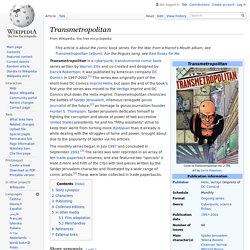 Fábio Moon, Gabriel Bá. "Daytripper" was selected as the 2014 Life of the Mind book at the University of Tennessee (UT) in Knoxville. 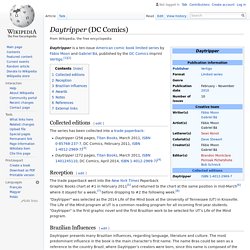 The Life of the Mind program at UT is a common reading program for all incoming first-year students. "Daytripper" is the first graphic novel and the first Brazilian work to be selected for UT's Life of the Mind program. Daytripper presents many Brazilian influences, regarding language, literature and culture. Brian K. Vaughan. Publication history[edit] The 60th and final issue of the series was celebrated with a party at Meltdown Comics, a shop on West Sunset Boulevard in Los Angeles, which was attended by 100 collaborators and fans, including writer/director Joss Whedon.[1] Plot summary [edit] On July 17, 2002, all living mammals with a Y chromosome--including embryos and sperm--simultaneously die, with the exception of a young amateur escape artist named Yorick Brown and his Capuchin monkey, Ampersand. 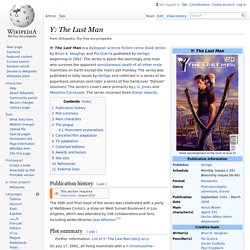 Many women die from disasters caused by the men's deaths, such as plane crashes. V for Vendetta. Publication history[edit] When the publishers cancelled Warrior in 1985 (with two completed issues unpublished due to the cancellation), several companies attempted to convince Moore and Lloyd to let them publish and complete the story. 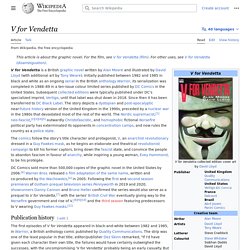 Alan Moore. Moore used the story as a means to reflect contemporary anxieties and to deconstruct and parody the superhero concept. Watchmen depicts an alternate history where superheroes emerged in the 1940s and 1960s, helping the United States to win the Vietnam War. In 1985, the country is edging toward nuclear war with the Soviet Union, freelance costumed vigilantes have been outlawed and most former superheroes are in retirement or working for the government. The story focuses on the personal development and moral struggles of the protagonists as an investigation into the murder of a government sponsored superhero pulls them out of retirement.

Creatively, the focus of Watchmen is on its structure. Gibbons used a nine-panel grid layout throughout the series and added recurring symbols such as a blood-stained smiley face. Publication history[edit] Locke & Key. Plot summary[edit] Many years later, Dodge's spirit reaches out to a young abused prodigy, Sam Lesser, and convinces him to attack the Lockes and kill Rendell, looking for the key to the Black Door, as well as a key to free Dodge from the well.

After the gruesome murder of their father, the Locke kids, Tyler, Kinsey and Bode move with their mother Nina across the country to Keyhouse and begin discovering its secrets. Bill Willingham. A principal character is the Big Bad Wolf (calling himself "Bigby"), who has not only reformed, but gained the ability to take on a more human appearance, and serves as Fabletown's sheriff at the series' beginning. Many other casting characters have also been reformed in such a way to preserve their natural state from past "fable" descriptions. Earlier story arcs each take on the form of a different genre: the first is a murder mystery, the next a conspiracy thriller, and then a caper story. Legends in Exile (issues 1 to 5) Animal Farm (issues 6 to 10) A revolt occurs on the Farm, a place for non-human Fables. Bag 'O Bones (issue 11) Bill Willingham. The Return of the Maharaja (issue 15 to 20): When Nalayani's village is attacked, she is sent on a quest that will transform all of Fables forever.

Clamour for Glamour (issue 27 to 32): Refugees from Fabletown have returned to New York's Castle Dark, and Reynard, now able to shapeshift from fox to man, travels the mundane world to regale the animals with tales of his exploits. (issue 33): final issue. Bill Willingham, Matthew Sturges. Publication[edit] Jack of Fables was the first project that Sturges worked upon in the comic book industry. Bond and Willingham originally chose him to act as a second voice in deciding for the upcoming new series.[2] Sturges remarked that in writing Jack of Fables, he would increasingly put the character Jack in more and more dilemma.

He did this because he and the team found it amusing to harm him in every story.[6] Others who worked on the main Fables series also worked on the spin-off, including long-time Fables inker Steve Leiahloha as penciller and inker in two issues.[4] Artists Tony Akins, Andrey Pepoy, Todd Klein, Russell Braun, Andrew Robinson and Brian Bolland also worked on the series as well. Todd Klein in particular, was chosen to add humor in the story, and Sturges praised him for his work while also not making it too "cartoony". Plot[edit] Ed Brubaker & Sean Phillips. The Fade Out. Craig Thompson. Craig Thompson: Craig is the main character, who is depicted from childhood to a young adulthood. Craig struggles with his Christianity, and with his belief that the Christianity that he has been surrounded with his whole life is not what he believes it should be.

It chronicles the author's childhood and youth in rural Pennsylvania, United States, focusing on her complex relationship with her father.