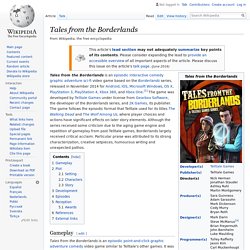 It was released in five episodes. The player is able to move their player-character around the world's environment, interacting with objects and initiating conversation trees with non-player characters. Choices made by the player influence story elements in future episodes. The Wolf Among Us. Gameplay[edit] In-game conversations are presented in the form of dialogue trees Development[edit] Releases for the PlayStation 4 and Xbox One consoles were announced in May 2014 with release at a later date, along with retail versions of the game for PlayStation 3 and Xbox 360 consoles.[32] Synopsis[edit] 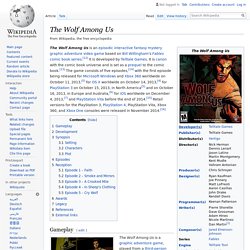 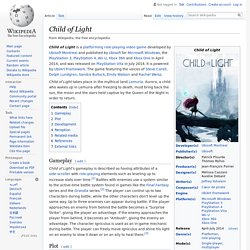 It is powered by UbiArt Framework. The game featuring the voices of Steve Carell, Dolph Lundgren, Sandra Bullock, Emily Watson and Rachel Weisz. Gameplay[edit] Dark Souls II. After some initial delays, the game was released worldwide in March 2014, with the Microsoft Windows version being released on April 24, 2014.[3][5] An updated version of the game, Dark Souls II: Scholar of the First Sin, was released in April 2015. 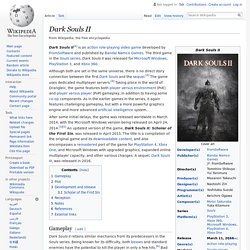 The title is a compilation of the original game and its downloadable content, and also encompasses a remastered port of the game for PlayStation 4, Xbox One, and Microsoft Windows with upgraded graphics, expanded online multiplayer capacity, and other various changes. A sequel, Dark Souls III, was released in 2016. Gameplay[edit] Gameplay from Crown of the Ivory King (trailer) Multiplayer in Dark Souls II uses the same format as its predecessors; players have the choice between co-operative play in the form of being "summoned" into another player's game world, or player-versus-player through "invading" other worlds. 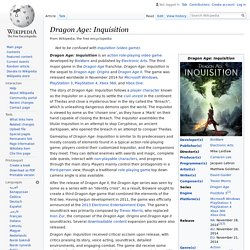 The third major game in the Dragon Age franchise, Dragon Age: Inquisition is the sequel to Dragon Age: Origins and Dragon Age II. The game was released worldwide in November 2014 for Microsoft Windows, PlayStation 3, PlayStation 4, Xbox 360, and Xbox One. The story of Dragon Age: Inquisition follows a player character known as the Inquisitor on a journey to settle the civil unrest in the continent of Thedas and close a mysterious tear in the sky called the "Breach", which is unleashing dangerous demons upon the world. Divinity: Original Sin. Divinity: Original Sin is a single-player and cooperative multiplayer fantasy role-playing video game, developed by Larian Studios. 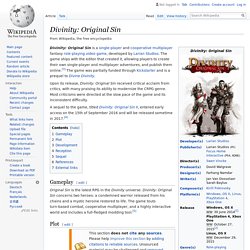 The game ships with the editor that created it, allowing players to create their own single-player and multiplayer adventures, and publish them online.[3] The game was partially funded through Kickstarter and is a prequel to Divine Divinity. Upon its release, Divinity: Original Sin received critical acclaim from critics, with many praising its ability to modernize the CRPG genre. Most criticisms were directed at the slow pace of the game and its inconsistent difficulty. Middle-earth: Shadow of Mordor. The game's development began in 2011. 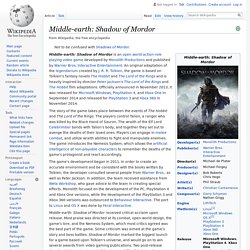 In order to create an accurate environment and be consistent with the books written by Tolkien, the developer consulted several people from Warner Bros., as well as Peter Jackson. In addition, the team received assistance from Weta Workshop, who gave advice to the team in creating special effects. Hearthstone. The game is a turn-based card game between two opponents, using constructed decks of thirty cards along with a selected hero with a unique power. 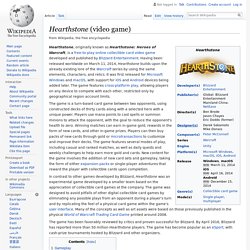 Players use mana points to cast spells or summon minions to attack the opponent, with the goal to reduce the opponent's health to zero. Winning matches can earn in-game gold, rewards in the form of new cards, and other in-game prizes. Players can then buy packs of new cards through gold or microtransactions to customize and improve their decks. The game features several modes of play, including casual and ranked matches, as well as daily quests and weekly challenges to help earn more gold and cards. New content for the game involves the addition of new card sets and gameplay, taking the form of either expansion packs or single-player adventures that reward the player with collectible cards upon completion. 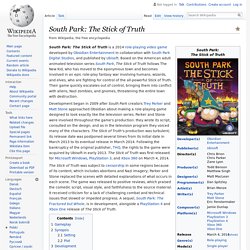 Based on the American adult animated television series South Park, The Stick of Truth follows The New Kid, who has moved to the eponymous town and becomes involved in an epic role-play fantasy war involving humans, wizards, and elves, who are fighting for control of the all-powerful Stick of Truth. Their game quickly escalates out of control, bringing them into conflict with aliens, Nazi zombies, and gnomes, threatening the entire town with destruction. Development began in 2009 after South Park creators Trey Parker and Matt Stone approached Obsidian about making a role-playing game designed to look exactly like the television series. Space Engineers. For the 3D astronomy program and game engine, see SpaceEngine. 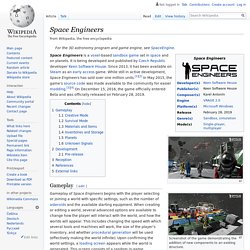 Gameplay[edit] Screenshot of the game demonstrating the addition of new components to an existing structure. An astronaut mining an asteroid for resources using a hand drill. Sherlock Holmes: Crimes & Punishments. The game takes place in London and its suburbs in 1894 and 1895, towards the end of the 19th century; it resonates with the Russian novel Crime and Punishment by author Fyodor Dostoyevsky focusing onto finding the right culprit and making the moral choice of absolving or condemning them. The game is the first in the series to use the Unreal Engine 3, and was inspired by Arthur Conan Doyle's original stories.

The game is split into six cases of murders, disappearances and thefts written in the tradition of Doyle novels.[1] Gameplay[edit] Sherlock Holmes is the main playable character with Dr.John Watson, Toby and Constable Marrow playable briefly. The majority of the game involves exploring crime scenes and examining clues. Darkest Dungeon. Darkest Dungeon is a dungeon crawling video game developed and published by indie game developer Red Hook Studios. The game, following an Early Access development period, was released on January 19, 2016, for Microsoft Windows and OS X, with a release for PlayStation 4, PlayStation Vita, and Linux platforms a few months later. The game received positive reviews from critics, garnering several award nominations, and went on to sell over one million copies. Plot[edit] At the outset of Darkest Dungeon, the player learns that they have inherited an estate from a relative who, while seeking fame and fortune by excavating the dungeons and catacombs beneath their manor, has unearthed portals to dark dimensions and released a number of horrific and evil creatures onto the world.

Cowardly, the relative took his own life rather than deal with his mistake. This War of Mine. Gameplay[edit] This War of Mine is a survival-themed strategy game where the player controls a group of civilian survivors in a makeshift shelter in the besieged, war-torn fictional city of Pogoren, Graznavia. The main goal of the game is to survive the war with the tools and materials the player can gather with the characters they control.

Most of the characters under the player's control have no military background or any kind of survival experience, and will require constant intervention by the player in order to stay alive. Destiny. Players take on the role of a Guardian, protectors of Earth's last safe city as they wield a power called Light to protect the City from different alien races. Guardians are tasked with reviving a celestial being called the Traveler, while journeying to different planets to investigate and destroy the alien threats before humanity is completely wiped out. Bungie released four expansion packs, furthering the story, and adding new content, missions, and new PvP modes.

Year One of Destiny featured two small expansions, The Dark Below in December 2014 and House of Wolves in May 2015. A third, larger expansion, The Taken King, was released in September 2015 and marked the beginning of Year Two, changing much of the core gameplay. In December 2015, Destiny shifted to an event-based model, featuring more limited-time events. The Banner Saga. The Banner Saga is a fantasy tactical role-playing video game developed by Stoic, a trio of indie game developers formerly of BioWare, and published by Versus Evil. The game takes place in a fictional world inspired by Viking mythology.