Journey. Journey is an indie video game developed by thatgamecompany and published by Sony Computer Entertainment for the PlayStation 3. 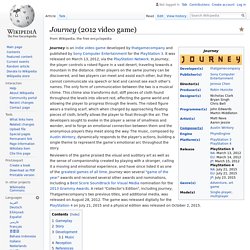 It was released on March 13, 2012, via the PlayStation Network. In Journey, the player controls a robed figure in a vast desert, traveling towards a mountain in the distance. Other players on the same journey can be discovered, and two players can meet and assist each other, but they cannot communicate via speech or text and cannot see each other's names. The only form of communication between the two is a musical chime. 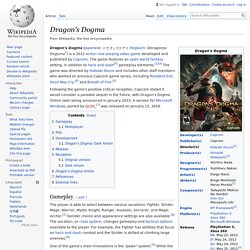 Is a 2012 action role-playing video game developed and published by Capcom. The game features an open world fantasy setting, in addition to hack and slash[5] gameplay elements.[1][3] The game was directed by Hideaki Itsuno and includes other staff members who worked on previous Capcom game series, including Resident Evil, Devil May Cry,[6] and Breath of Fire.[2] Following the game's positive critical reception, Capcom stated it would consider a possible sequel in the future, with Dragon's Dogma Online later being announced in January 2015. Mass Effect 3. Mass Effect 3 is an action role-playing third person shooter video game developed by BioWare and published by Electronic Arts for Microsoft Windows, Xbox 360, PlayStation 3, and Wii U.[1] Officially announced on December 11, 2010,[2][3] the game was released March 6, 2012[4][5] and marks the final chapter in the original Mass Effect trilogy of video games, completing the story of Commander Shepard.[6][7] A Wii U version was announced during Nintendo's conference at E3 2012.[8] The Wii U port was developed by Australian developer Straight Right,[9] and was released as a Wii U launch game[10] under the title Mass Effect 3: Special Edition. 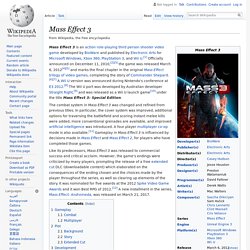 Like its predecessors, Mass Effect 3 was released to commercial success and critical acclaim. Gameplay[edit] Certain aspects of gameplay in Mass Effect 3 are impacted by choices made in previous games. An expanded leveling up screen demonstrating skill trees in Mass Effect 3. FTL: Faster Than Light. This article is about the video game. 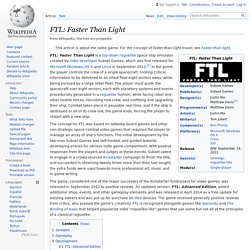 For the concept of faster-than-light travel, see Faster-than-light. FTL: Faster Than Light is a top-down roguelike space ship simulator created by indie developer Subset Games, which was first released for Microsoft Windows, OS X and Linux in September 2012.[2] In the game, the player controls the crew of a single spacecraft, holding critical information to be delivered to an allied fleet eight sectors away, while being pursued by a large rebel fleet. The player must guide the spacecraft over eight sectors, each with planetary systems and events procedurally generated in a roguelike fashion, while facing rebel and other hostile forces, recruiting new crew, and outfitting and upgrading their ship.

Combat takes place in pausable real time, and if the ship is destroyed or all of its crew lost, the game ends, forcing the player to restart with a new ship. Dishonored. Dishonored is a 2012 stealth action-adventure video game developed by Arkane Studios and published by Bethesda Softworks. 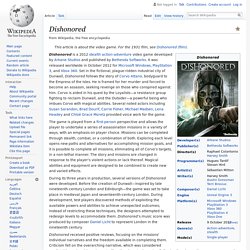 It was released worldwide in October 2012 for Microsoft Windows, PlayStation 3, and Xbox 360. Set in the fictional, plague-ridden industrial city of Dunwall, Dishonored follows the story of Corvo Attano, bodyguard to the Empress of the Isles. The Walking Dead. Unlike many graphic adventure games, The Walking Dead does not emphasize puzzle solving, but instead focuses on story and character development. 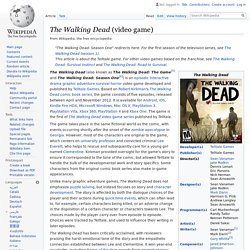 The story is affected by both the dialogue choices of the player and their actions during quick time events, which can often lead to, for example, certain characters being killed, or an adverse change in the disposition of a certain character or characters towards Lee. The choices made by the player carry over from episode to episode. Choices were tracked by Telltale, and used to influence their writing in later episodes. A screenshot showing dialog choices. Diablo III. In the game, players choose one of six character classes – Barbarian, Crusader, Demon Hunter, Monk, Witch Doctor or Wizard (with the Crusader being unavailable unless the player has purchased the expansion pack, Diablo III: Reaper of Souls) – and are tasked with defeating the Lord of Terror, Diablo. 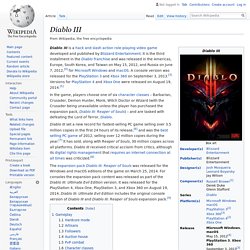 Diablo III set a new record for fastest-selling PC game selling over 3.5 million copies in the first 24 hours of its release,[6] and was the best selling PC game of 2012, selling over 12 million copies during the year.[7] It has sold, along with Reaper of Souls, 30 million copies across all platforms. Diablo III received critical acclaim from critics, although its digital rights management that requires an internet connection at all times was criticized.[8] The expansion pack Diablo III: Reaper of Souls was released for the Windows and macOS editions of the game on March 25, 2014. For consoles the expansion pack content was released as part of the Diablo III: Ultimate Evil Edition version.

Borderlands 2. As with the first game, Borderlands 2 allows players to complete a campaign consisting of central quests and optional side-missions as one of four treasure seekers, "Vault Hunters", on the planet Pandora. 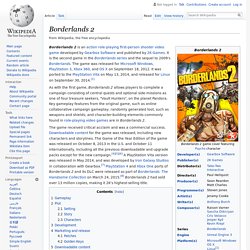 Key gameplay features from the original game, such as online collaborative campaign gameplay; randomly generated loot, such as weapons and shields; and character-building elements commonly found in role-playing video games are in Borderlands 2. The game received critical acclaim and was a commercial success. 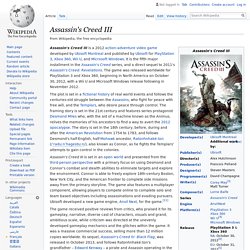 It is the fifth major installment in the Assassin's Creed series, and a direct sequel to 2011's Assassin's Creed: Revelations. The game was released worldwide for PlayStation 3 and Xbox 360, beginning in North America on October 30, 2012, with a Wii U and Microsoft Windows release following in November 2012. The plot is set in a fictional history of real world events and follows the centuries-old struggle between the Assassins, who fight for peace with free will, and the Templars, who desire peace through control. The Testament of Sherlock Holmes. The game was developed primarily for consoles, and features a new graphic engine and gameplay mechanics.[4] It is based on the fictional detective Sherlock Holmes, the protagonist of 56 short stories and 4 novels by Arthur Conan Doyle. 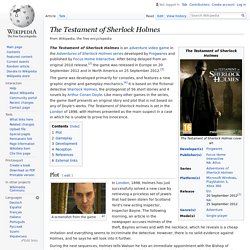 Like many other games in the series, the game itself presents an original story and plot that is not based on any of Doyle's works. The Testament of Sherlock Holmes is set in the London of 1898, with Holmes presented as the main suspect in a case in which he is unable to prove his innocence. Plot[edit] Game of Thrones. The game was generally well received, and Telltale is currently working on a second season of the game. Ty Corey Franck, Martin's personal assistant, acts as a "story consultant" for the game. Each episode contains five points where the player must make a significant decision, choosing from one of two available options. Through Telltale's servers, the game tracks how many players selected which option and lets the player compare their choices to the rest of the player base. The game can be completed regardless of what choices are made in these situations; the main events of the story, as described below, will continue regardless of what choices are made, but the presence and behavior of the non-player characters in later scenes will be affected by these choices.

Superbrothers: Sword & Sworcery EP. Gameplay[edit] The user taps where they want the character, a Scythian warrior, to go. The accelerometer is incorporated into the gameplay, with the user turning the device 90 degrees to make the character take out their sword (the PC version uses the right mouse button). The player taps the shield button or the sword button to use them.

Most of the dialogue is actually done through thoughts, once the user has acquired the "megatome", a magic book that lets the character read people's minds.