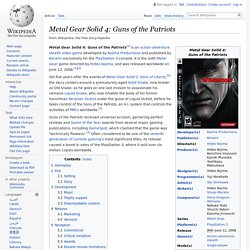 It is the sixth Metal Gear game directed by Hideo Kojima, and was released worldwide on June 12, 2008.[1][2] Set five years after the events of Metal Gear Solid 2: Sons of Liberty,[b] the story centers around a prematurely aged Solid Snake, now known as Old Snake, as he goes on one last mission to assassinate his nemesis Liquid Snake, who now inhabits the body of his former henchman Revolver Ocelot under the guise of Liquid Ocelot, before he takes control of the Sons of the Patriots, an A.I. system that controls the activities of PMCs worldwide.[3] Gameplay[edit] In MGS4, players assume the role of an aged Solid Snake (also referred to as Old Snake), using stealth, close quarters combat, and traditional Metal Gear combat. A further addition to gameplay mechanics is the Psyche Meter. Plot[edit] Setting[edit] Valkyria Chronicles. This article is about the video game. 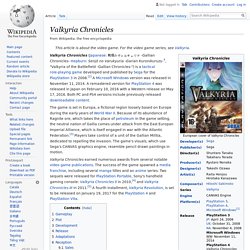 For the video game series, see Valkyria. Valkyria Chronicles (Japanese: 戦場のヴァルキュリア -Gallian Chronicles-, Hepburn: Senjō no Varukyuria -Garian Kuronikuruzu-? , "Valkyria of the Battlefield -Gallian Chronicles-") is a tactical role-playing game developed and published by Sega for the PlayStation 3 in 2008.[2] A Microsoft Windows version was released in November 11, 2014. A remastered version for PlayStation 4 was released in Japan on February 10, 2016 with a Western release on May 17, 2016. Both PC and PS4 versions include previously released downloadable content. The game is set in Europa, a fictional region loosely based on Europe during the early years of World War II. Valkyria Chronicles earned numerous awards from several notable video game publications. Gameplay[edit] The overhead map view of Command Mode. Homer Peron attacks Imperial troops with a hand grenade in Action Mode.

Fallout 3. Persona 4. The plot of Persona 4 was inspired by the work of mystery novelists owing to its murder mystery premise. 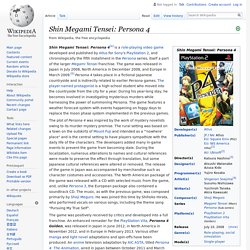 The rural setting was based on a town on the outskirts of Mount Fuji and intended as a "'nowhere' place" and is the central setting to have players sympathize with the daily life of the characters. The developers added many in-game events to prevent the game from becoming stale. During the localization, numerous alterations to names and cultural references were made to preserve the effect through translation, but some Japanese cultural references were altered or removed. LittleBigPlanet. A screenshot from the Savannah level Swinging Safari in LittleBigPlanet. 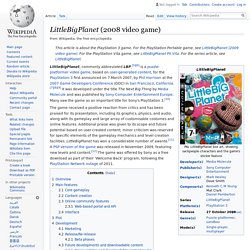 Throughout the story mode, players collect prize bubbles which unlock materials, objects, stickers, decorations, sound effects and music tracks which can be used in Create mode. A demonstration of the character customisation available in LittleBigPlanet. LBP.me allows people to search for levels from a web browser. LittleBigPlanet is set in a world full of creations made by Creator Curators. Grand Theft Auto IV. The game is played from a third-person perspective and its world is navigated on-foot or by vehicle. 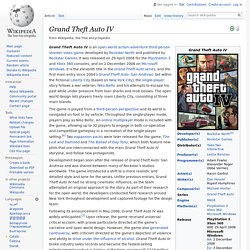 Throughout the single-player mode, players play as Niko Bellic. An online multiplayer mode is included with the game, allowing up to 32 players to engage in both co-operative and competitive gameplay in a recreation of the single-player setting. [b] Two expansion packs were later released for the game, The Lost and Damned and The Ballad of Gay Tony, which both feature new plots that are interconnected with the main Grand Theft Auto IV storyline, and follow new protagonists. Development began soon after the release of Grand Theft Auto: San Andreas and was shared between many of Rockstar's studios worldwide. Mirror's Edge. Mirror's Edge is a first-person action-adventure platformer developed by EA DICE and published by Electronic Arts. 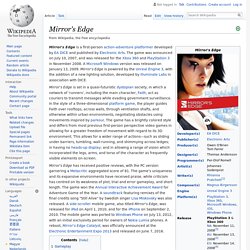 The game was announced on July 10, 2007, and was released for the Xbox 360 and PlayStation 3 in November 2008. A Microsoft Windows version was released on January 13, 2009. Mirror's Edge is powered by the Unreal Engine 3, with the addition of a new lighting solution, developed by Illuminate Labs in association with DICE. Mirror's Edge has received positive reviews, with the PC version garnering a Metacritic aggregated score of 81. The game's uniqueness and its expansive environments have received praise, while criticism has centred on its weakness of plot, trial and error gameplay, and short length. 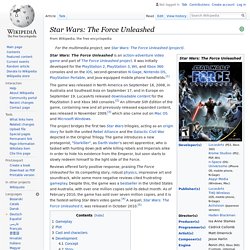 LucasArts released downloadable content for the PlayStation 3 and Xbox 360 consoles.[2] An Ultimate Sith Edition of the game, containing new and all previously released expanded content, was released in November 2009,[3] which also came out on Mac OS and Microsoft Windows.