Xbox. This article is about the original Xbox. 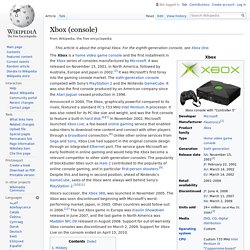 For the eighth-generation console, see Xbox One. GameCube. The GameCube is the first Nintendo console to use optical discs as its primary storage medium. 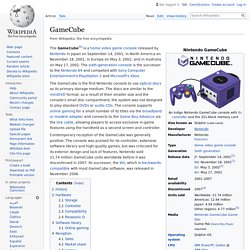 The discs are similar to the miniDVD format; as a result of their smaller size and the console's small disc compartment, the system was not designed to play standard DVDs or audio CDs. Gothic. Gothic is a single-player action role-playing video game for Windows developed by the German company Piranha Bytes. 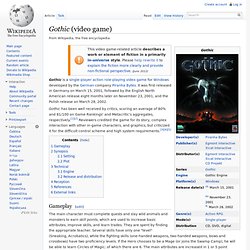 It was first released in Germany on March 15, 2001, followed by the English North American release eight months later on November 23, 2001, and the Polish release on March 28, 2002. Gothic has been well received by critics, scoring an average of 80% and 81/100 on Game Rankings' and Metacritic's aggregates, respectively.[1] Reviewers credited the game for its story, complex interaction with other in-game characters, and graphics, but criticized it for the difficult control scheme and high system requirements.[3][4][5] The main character must complete quests and slay wild animals and monsters to earn skill points, which are used to increase basic attributes, improve skills, and learn trades.

They are spent by finding the appropriate teacher. Metal Gear Solid 2: Sons of Liberty. The story revolves around the "Big Shell", a massive offshore clean-up facility that has been seized by a group of terrorists who call themselves the "Sons of Liberty". 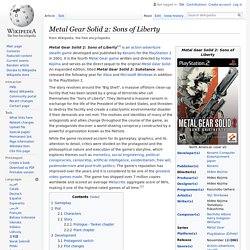 They demand a massive ransom in exchange for the life of the President of the United States, and threaten to destroy the facility and create a cataclysmic environmental disaster if their demands are not met. The motives and identities of many of the antagonists and allies change throughout the course of the game, as the protagonists discover a world-shaking conspiracy constructed by a powerful organization known as the Patriots. Gameplay[edit] Arcanum: Of Steamworks and Magick Obscura. Arcanum: Of Steamworks and Magick Obscura (more commonly known as Arcanum) is a 2001 role-playing video game developed by Troika Games and published by Sierra Entertainment. 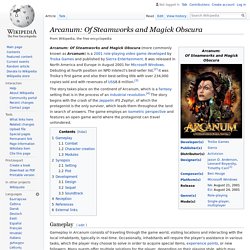 It was released in North America and Europe in August 2001 for Microsoft Windows. Debuting at fourth position on NPD Intelect's best-seller list,[2] it was Troika's first game and also their best-selling title with over 234,000 copies sold and with revenues of US$8.8 million.[3] Final Fantasy X. Development of Final Fantasy X began in 1999, with a budget of more than US$32.3 million and a team of more than 100 people. 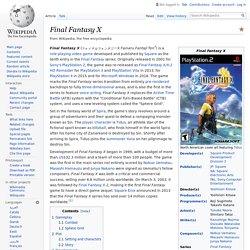 The game was the first in the main series not entirely scored by Nobuo Uematsu; Masashi Hamauzu and Junya Nakano were signed as Uematsu's fellow composers. Final Fantasy X was both a critical and commercial success, selling over 6.6 million units worldwide. On March 3, 2003, it was followed by Final Fantasy X-2, making it the first Final Fantasy game to have a direct game sequel. Square Enix announced in 2013 that the Final Fantasy X series has sold over 14 million copies worldwide.[1] Gameplay[edit] Like previous games in the series, Final Fantasy X is presented in a third-person perspective, with players directly navigating the main character, Tidus, around the world to interact with objects and people.

Stronghold. Stronghold is a historic real-time strategy game developed by Firefly Studios in 2001. 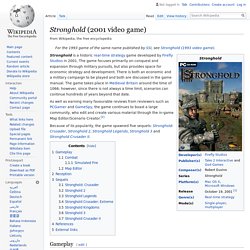 The game focuses primarily on conquest and expansion through military pursuits, but also provides space for economic strategy and development. There is both an economic and a military campaign to be played and both are discussed in the game manual. The game takes place in Medieval Britain around the time of 1066; however, since there is not always a time limit, scenarios can continue hundreds of years beyond that date. Cossacks: European Wars. Cossacks: European Wars is a real-time strategy video game for Microsoft Windows made by the Ukrainian developer GSC Game World. 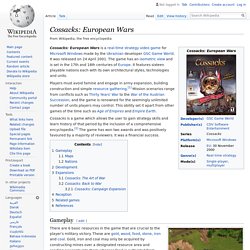 It was released on 24 April 2001. The game has an isometric view and is set in the 17th and 18th centuries of Europe. It features sixteen playable nations each with its own architectural styles, technologies and units. Players must avoid famine and engage in army expansion, building construction and simple resource gathering.[1] Mission scenarios range from conflicts such as Thirty Years' War to the War of the Austrian Succession, and the game is renowned for the seemingly unlimited number of units players may control. This ability set it apart from other games of the time such as Age of Empires and Empire Earth. Desperados: Wanted Dead or Alive. Story[edit] The game takes place in New Mexico, 1881. 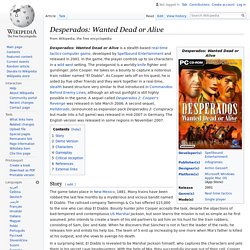 Many trains have been robbed the last few months by a mysterious and vicious bandit named El Diablo. The railroad company Twinnings & Co has offered $15,000 to the one who can stop El Diablo. Bounty hunter John Cooper accepts the task, despite the objections of bad-tempered and contemptuous US Marshal Jackson, but soon learns the mission is not as simple as he first assumed.

John intends to create a team of his old partners to aid him on his hunt for the train robbers, consisting of Sam, Doc and Kate. In a surprising twist, El Diablo is revealed to be Marshal Jackson himself, who captures the characters and jails them in his secret cave headquarters. Demo Version[edit] Civilization III. Civilization III, like the other Civilization games, entails building an empire, from the ground up, beginning in 4,000 BC and continuing slightly beyond the modern day. 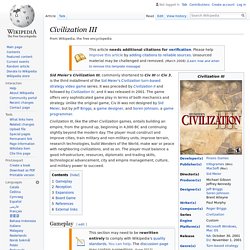 The player must construct and improve cities, train military and non-military units, improve terrain, research technologies, build Wonders of the World, make war or peace with neighboring civilizations, and so on. The player must balance a good infrastructure, resources, diplomatic and trading skills, technological advancement, city and empire management, culture, and military power to succeed. Gameplay[edit] Fallout Tactics: Brotherhood of Steel. The game follows a squad of the Brotherhood of Steel as it becomes engaged in a desperate war. Although the game takes place in the Fallout universe, it does not follow or continue the story of either Fallout or Fallout 2. Fallout Tactics shipped with a bonus CD when it was pre-ordered. The bonus CD included Fallout: Warfare, a table-top miniatures game based on the Fallout universe, as well as a bonus mission for the main game which occurs in Springfield, Illinois. Gameplay[edit] A squad uses high ground to attack deathclaws and human Beastlords Unlike the previous two Fallout games, Fallout Tactics emphasizes tactical combat and strategy.

IL-2 Sturmovik. The game includes a multi-player feature which supports up to 100 players online over the internet. Etherlords. Etherlords (Russian: Демиурги) is a fantasy turn-based strategy and card-dueling series for the PC, by Russian developer Nival Interactive. The first game was published November 12, 2001 by Fishtank Interactive.

Prior to worldwide release it was released in Russia (November 9, 2001) as Demiurges (Russian: Демиурги). It was followed two years later by a sequel, Etherlords II, which was published in Europe by DreamCatcher Games and in North America by Strategy First. Nival has stated that a third game isn't out of the question, but so far nothing has been announced. Black & White. Black & White is a god video game developed by Lionhead Studios and published by Electronic Arts for Microsoft Windows in 2001. The game was published by Feral Interactive in 2002 for Mac OS. Black & White combines elements of artificial life, strategy, and fighting games.

Myth III: The Wolf Age. Silent Hill 2. Silent Hill 2 uses a third-person view and gameplay places a greater emphasis on finding items and solving riddles than combat. Psychological aspects such as the gradual disappearance of Mary's letter were added to the game. Tropico. Grand Theft Auto III. The game is played from a third-person perspective and its world is navigated on foot or by vehicle. The open world design lets players freely roam Liberty City, consisting of three main islands.

Development was shared between DMA Design, based in Edinburgh and Rockstar, in New York City. Much of the development work constituted transforming popular series elements into a 3D world.