Sick Buildings. Are You Suffering From Sick Building Syndrome? Sick building syndrome (SBS) refers to a number of ailments that occur as a result of exposure to harmful chemical toxins at a home or work building. 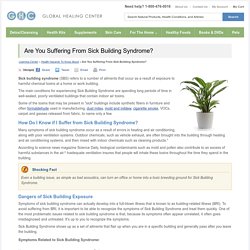 The main conditions for experiencing Sick Building Syndrome are spending long periods of time in well-sealed, poorly ventilated buildings that contain indoor air toxins. Some of the toxins that may be present in "sick" buildings include synthetic fibers in furniture and often formaldehyde used in manufacturing, dust mites, mold and mildew, cigarette smoke, VOCs, carpet and gasses released from fabric, to name only a few.

How Do I Know if I Suffer from Sick Building Syndrome? Many symptoms of sick building syndrome occur as a result of errors in heating and air conditioning, along with poor ventilation systems. Outdoor chemicals, such as vehicle exhaust, are often brought into the building through heating and air conditioning systems, and then mixed with indoor chemicals such as cleaning products.¹ The sick building syndrome. Indoor air. It is generally recognised that Australians spend 90% or more of their time indoors. 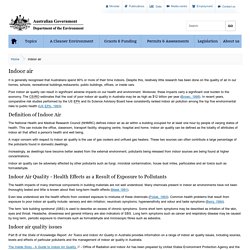 Despite this, relatively little research has been done on the quality of air in our homes, schools, recreational buildings,restaurants, public buildings, offices, or inside cars. Poor indoor air quality can result in significant adverse impacts on our health and environment. Moreover, these impacts carry a significant cost burden to the economy. The CSIRO estimates that the cost of poor indoor air quality in Australia may be as high as $12 billion per year (Brown, 1998). In recent years, comparative risk studies performed by the US EPA and its Science Advisory Board have consistently ranked indoor air pollution among the top five environmental risks to public health (US EPA, 1993). Sick_building_factsheet.pdf. Waset. Building health: an epidemiological study of "sick building syndrome" in the Whitehall II study. 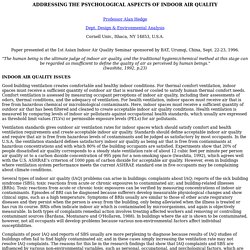 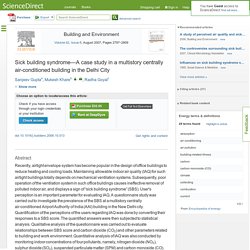 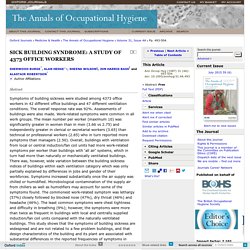 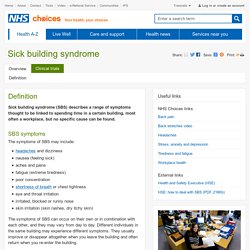 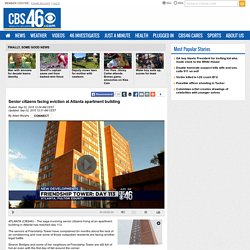 The seniors at Friendship Tower have complained for months about the lack of air conditioning and now some of those outspoken residents are facing another legal battle. Sharon Bridges and some of her neighbors at Friendship Tower are still full of hot air even with the first day of fall around the corner. “I’ve been to the doctor three times within three months because of the stuff that’s flying around in that place. Something is not right and they know it is not right,” Bridges said. Bridges said her health issues began after management replaced a broken air conditioning unit. “I just keep praying to God,” Bridges said.

To make matters worse, Bridges and about a dozen others living at Friendship Tower received eviction notices from management for various reasons. “They’re trying to evict me because they said I had an argument with one of the residents,” tenant Joe Brown said. Occupational and Environmental Medicine. The sick building syndrome (SBS) consists of a group of mucosal, skin, and general symptoms that are temporally related to working in particular buildings. 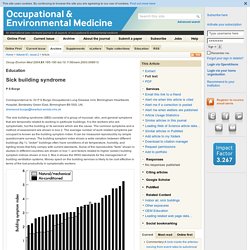 It is the workers who are symptomatic, but the building or its services which are the cause. The common symptoms and a method of assessment are shown in box 2. The average number of work related symptoms per occupant is known as the building symptom index. It can be measured reproducibly by simple questionnaire surveys. The building symptom index shows a wide variation between different buildings (fig 1); “sicker” buildings often have conditions of air temperature, humidity, and lighting levels that fully comply with current standards. Figure 1 Range of building symptom indices in a group of buildings studied with the same questionnaire with a maximum of 10 symptoms (the actual BSI is dependent on the number of possible positive answers and differs between questionnaires). Each question is prefaced by: And sufficed by: Personal factors. 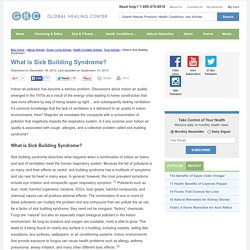 Discussions about indoor air quality emerged in the 1970s as a result of the energy crisis leading to home construction that was more efficient by way of being sealed up tight… and subsequently lacking ventilation. It’s common knowledge that the lack of ventilation is a detriment to air quality in indoor environments. How? Stagnant air inundates the occupants with a concentration of pollution that negatively impacts the respiratory system. Prevention and Control. Bau Biologie. Indoor air. The sick building syndrome. 15.7 Legislation to ban smoking in public spaces - Tobacco In Australia. Every state and territory bans smoking in enclosed public places. 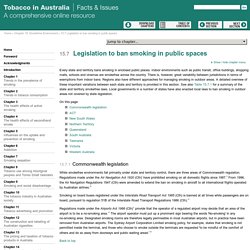 Indoor environments such as public transit, office buildings, shopping malls, schools and cinemas are smokefree across the country. There is, however, great variability between jurisdictions in terms of exemptions from indoor bans. Regions also have different approaches for managing smoking in outdoor areas. A detailed overview of these important variations between each state and territory is provided in this section.

See also Table 15.7.1 for a summary of the state and territory smokefree laws. On this page: 15.7.1Commonwealth legislation While smokefree environments fall primarily under state and territory control, there are three areas of Commonwealth regulation. Smoking on board buses registered under the Interstate Road Transport Act 1985 (Cth) is banned at all times while passengers are on board, pursuant to regulation 51B of the Interstate Road Transport Regulations 1986 (Cth). Back to top 15.7.2.3 Smoking in cars. Building Biology.