Social Media Growth & how Instagram is used as a tool

Social Media terms you need to know for 2016 - Brisbane & Gold Coast Social Media Marketing. As a business, you are one of the potential customers sources of information when it comes to the content which you publish to your social media accounts. 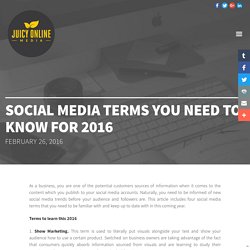 Naturally, you need to be informed of new social media trends before your audience and followers are. This article includes four social media terms that you need to be familiar with and keep up to date with in this coming year. Terms to learn this 2016 Show Marketing. This term is used to literally put visuals alongside your text and show your audience how to use a certain product. Employee Amplification. Why you need to be updated with these terms Keeping updated with social media terms show how hands-on you are with your business and how you strive to serve your audience and followers better. There are always new terms and ideas which marketers constantly come up with on social media and knowing these new terms will help you build a better connection between your brand and your businesses potential customers. How International fast fashion brands use Facebook as direct marketing tool_Chiang Yu-Fan. 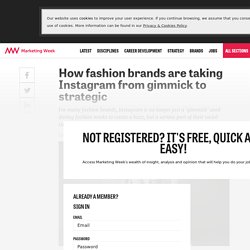 Besides putting the final touches on runway frocks, these days social media campaigns are equally as important. After all, a well-landed social campaign can see any fashion brand hit headlines, create a buzz as well as result in coveted consumer engagement. This year, Instagram seems to be the fashion world’s platform of choice. Figures by digital marketing agency Greenlight show that there have been 5,602 Instagram posts using #LFW2016 in the month leading up to London Fashion Week 2016, compared with 1,178 Twitter mentions over the same timeframe. In sharp contrast, last year saw more than 6,000 twitter mentions using #LFW2015. Instagram already proved its popularity among fashion brands during New York Fashion Week earlier this month. The rising popularity of Instagram “We live in a fast-paced world where we want to see things immediately. Tess Holliday: Milk Model Management's New Plus-Size Model.

You might not know her name now but you soon will, as Tess Holliday has made history by becoming the first model of her height and size to be signed by a modelling agency. 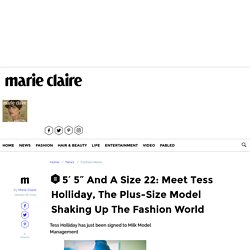 Snapped up by Milk Model Management, the mother of one from Mississippi is more than just a voiceless face of plus-size fashion: Since 2013, Tess has been actively seeking to change preconceived beauty ideals with the hashtag #effyourbeautystandards. By encouraging others to caption their selfies with this hashtag and creating slogan t-shirts baring the same statement, Tess eventually embarked on a media tour, where she shared her message with fans around America. And it seems it is this proactive attitude that has caught the eye of the agency, as Milk Model Management have said they chose Tess for her huge Instagram and Twitter following, clearly realising the influence the model could have over fans and maybe even the industry.

Tess told The Daily New York News, ‘I feel like it’s breaking ground. This is a milestone. Backlash against Burberry for hiring Brooklyn Beckham as a photographer. Most teenagers could at most dream of an internship at a fashion house where the biggest task they would be entrusted with would be making the tea. 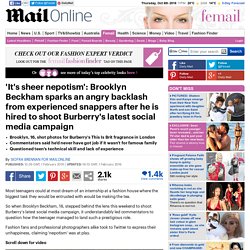 So when Brooklyn Beckham, 16, stepped behind the lens this weekend to shoot Burberry's latest social media campaign, it understandably led commentators to question how the teenager managed to land such a prestigious role. Fashion fans and professional photographers alike took to Twitter to express their unhappiness, claiming 'nepotism' was at play. Scroll down for video Brookyln Beckham, 16, announced last week that he'd landed a job shooting Burberry's latest fragrance campaign, but his appointment has got people riled up on social media Spend it like Beckham in Brooklyn's bomber jacket by Burberry His little brother Romeo recently modeled in a Burberry campaign, but Brooklyn Beckham was the other side of the camera, taking on the role of photographer for a shoot for the brand. Head over to the Burberry website (click right) to get it now.

The Instagram Effect: How the platform drives decisions at fashion brands. Baublebar, the online retailer for fast-fashion jewelry, goes through its production design cycle in just a few weeks, from initial sketch to site launch. 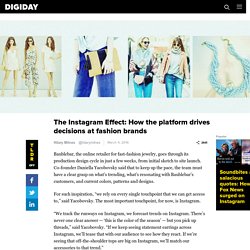 Co-founder Daniella Yacobovsky said that to keep up the pace, the team must have a clear grasp on what’s trending, what’s resonating with Baublebar’s customers, and current colors, patterns and designs. For such inspiration, “we rely on every single touchpoint that we can get access to,” said Yacobovsky. The most important touchpoint, for now, is Instagram. “We track the runways on Instagram, we forecast trends on Instagram. There’s never one clear answer — ‘this is the color of the season’ — but you pick up threads,” said Yacobovsky. Advertisement. Will Social Selling Work in Fashion? LONDON, United Kingdom — Red wine was flowing as a group of 25 women gathered at a home in Goring, Oxfordshire on a Friday night. 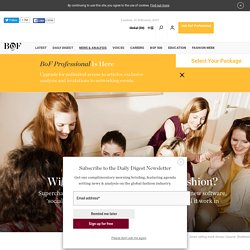 But they weren’t having a dinner party. Instead, they were slipping into blouses, dresses and shapewear. “Some women will want to try pieces on in the privacy of a bedroom. Others will happily strip down to their underwear and put things on immediately. There’s lots of laughter, lots of fun,” says Nayna McIntosh, founder and chief executive officer of Hope, a direct-sales fashion brand that operates via door-to-door sales, the business model made famous by Avon and Tupperware. According to the Direct Selling Association, a trade organisation based in Washington D.C., more than 18 million people were involved in direct selling in the US in 2014, generating sales of about $34.5 billion, a 5.5 percent increase from 2013.

But these are not your grandmother’s Avon ladies. Cabi shopping event | Source: Cabi The method has been effective.