Rise of Realism and Diversity 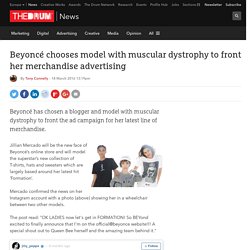 Jillian Mercado will be the new face of Beyoncé’s online store and will model the superstar’s new collection of T-shirts, hats and sweaters which are largely based around her latest hit ‘Formation’. Mercado confirmed the news on her Instagram account with a photo (above) showing her in a wheelchair between two other models.

Iskra Lawrence lands another major fashion shoot and is compared to Gigi Hadid. She's the model who was dumped by an agency at the age of 15 because her 'hips were too big' before going on to become one of the most successful plus-size models of the year - even making her debut at New York Fashion Week. 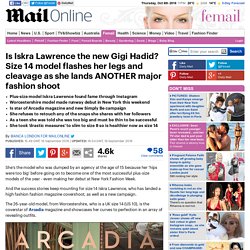 And the success stories keep mounting for size 14 Iskra Lawrence, who has landed a high fashion fashion magazine covershoot, as well as a new campaign. The 26-year-old model, from Worcestershire, who is a UK size 14 (US 10), is the coverstar of Arcadia magazine and showcases her curves to perfection in an array of revealing outfits. Cara Delevingne Is the Face of PUMA's New "Do You" Campaign. Cara Delevingne is now the newest brand ambassador for PUMA. 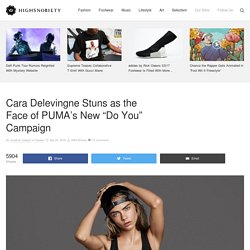 The move finds Cara joining the likes of Rihanna and Kylie Jenner on the label’s ever-expanding women’s roster. First up, the model-turned-actress is the face of PUMA’s new “Do You” campaign, which “aims to inspire confidence in women everywhere.” “To ‘DO YOU’ is to take ownership of yourself and finding the power within that ownership —it’s a very powerful statement,” says Cara. “It’s about accepting who you are, no matter your faults. ’DO YOU’ is about finding your truth and sticking to it. I think it’s so special because it means something.” Bloggers unveil the truth behind their perfect Instagram snaps. THE REALITY OF BEING A FULL TIME BLOGGER — Pretty Normal Me. It’s coming on for two years since I started Pretty Normal Me and in doing so, totally altered the direction that my life was going in. 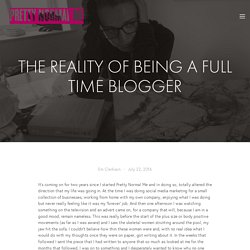 At the time I was doing social media marketing for a small collection of businesses, working from home with my own company, enjoying what I was doing but never really feeling like it was my ‘forever’ job. And then one afternoon I was watching something on the television and an advert came on, for a company that will, because I am in a good mood, remain nameless. The ugly truth behind my perfect Instagram shots: A model confesses. '[Instagram] has mutated into a behemoth of self-promotion where the more likes a person has, the more prestige and earning-power they can command' One photo, she explained, had had to be taken over a hundred times to get absolutely right and in another she revealed she was paid hundreds of pounds to wear a certain dress. 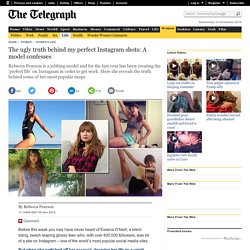 She told how she would starve herself for days to get the perfect flat stomach, and a new caption under a smiling selfie ends with a disclaimer all in upper case: ‘There is nothing real about this’. Often, she said, she felt utterly alone. While some users applauded her honesty, days later other commentators were calling the whole thing a hoax, a clever marketing ploy whereby Essena was simply making herself (and a her new website) even more famous. Model and blogger, Rebecca Pearson, at home in South London. Naomi Campbell on Diversity in the Fashion Industry, Beauty and More. Photo On the eve of VFiles’s fashion-week show, Naomi Campbell — who has been cast as one of the program’s mentors along with the stylist Mel Ottenberg, the makeup artist Pat McGrath, the Fear of God designer Jerry Lorenzo and the rapper Young Thug — was crouching down in a vintage dress and corset to look at designer mood boards and talk to each of the five designers who will present their collections at the group show on Wednesday night. 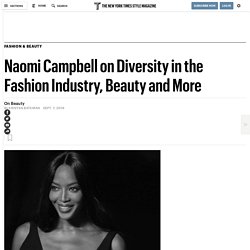 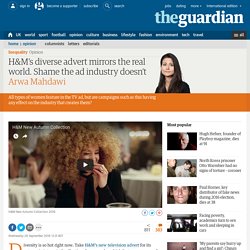 Take H&M’s new television advert for its autumn/winter 2016 collection, for example, which features a range of women including: • Black women with natural hair • Women with shaved heads • A muscular woman • Action shots of women’s wobbly bits wobbling. The size diversity revolution: Why brands are embracing body positivity. Curvy Kate launches diverse #TheNewSexy campaign. Curvy Kate, known for its fuller bust ranges of lingerie and swimwear, has launched its most diverse campaign to date.

Its #TheNewSexy campaign features eight female role models, including an Alopecia sufferer, a transgender woman, an amputee and recovered anorexic, as it looks to challenge social ‘norms’. The #TheNewSexy calls for women of all shapes, backgrounds and sizes to be represented in the media, along with looking to redefine how society views the word ‘sexy’, the lingerie brand said. “I will no longer allow you to dictate what's wrong with my looks”: Model writes powerful open letter to fashion industry. The Fashion Industry (Still) Has an Image Problem. Skinny Model Backstage | Source: Kenneth Lyngaas, Campaign Against Eating Disorders LONDON, United Kingdom — I hopped into a taxi the other morning and, as often happens with our famous London cabbies, the driver engaged me in a bit of friendly chit-chat. 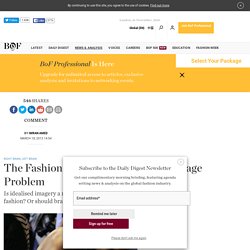 Invariably, this means talking about the bad weather, the traffic snarls, the origins of my accent — or, on occasion, my job. "What line of work are you in? " he asked. I told him I worked in the fashion business and went back to busily checking my emails on my iPhone. Emphasized Reality - Pop culture's anti-Photoshop attitude resonates with the masses. How should we tackle fashion’s body image issues? Is 2016 the year fashion really starts taking diversity seriously? 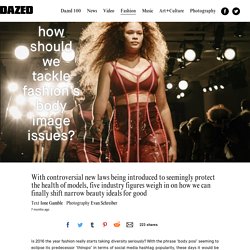 With the phrase ‘body posi’ seeming to eclipse its predecessor ‘thinspo’ in terms of social media hashtag popularity, these days it would be easy to assume the fashion industry’s ideologies are slowly shifting to that of a more inclusive standpoint. Social media is making it increasingly easy to build a platform and speak out on issues, many industry insiders have used their online leverage to campaign for change throughout all facets of fashion. How American Eagle Dodged the Teen Retailer Trap. PITTSBURGH, United States — For its first global advertising campaign, American Eagle isn’t relying on the typical teen-retail tropes to send its message. You won’t find fresh-faced, unreasonably tanned models running on the beach or palling around a campfire. Instead, the Pittsburgh-based company appears to be focusing on that uniquely millennial mix of individuality and collectivism, enlisting fashion industry cool-kids like photographer Cass Bird and stylist Sara Moonves to capture a cast of young influencers, from actress Hailee Steinfeld to musician Raury, in black-and-white portraits.

Each image is tagged with both #WeAllCan and a personal declaration. For instance, “Black-ish” actress Yara Shahidi chose the statement “I can be heard,” while YouTube personality Troye Sivan said, “I can love who I want.”