Would it be wrong to eradicate mosquitoes? Image copyright Science Photo Library The mosquito is the most dangerous animal in the world, carrying diseases that kill one million people a year. 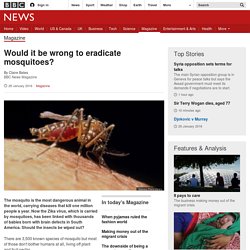 Now the Zika virus, which is carried by mosquitoes, has been linked with thousands of babies born with brain defects in South America. Should the insects be wiped out? There are 3,500 known species of mosquito but most of those don't bother humans at all, living off plant and fruit nectar. It's only the females from just 6% of species that draw blood from humans - to help them develop their eggs. "Half of the global population is at risk of a mosquito-borne disease," says Frances Hawkes from the Natural Resources Institute at the University of Greenwich. Deadly mosquitoes More than a million people, mostly from poorer nations, die each year from mosquito-borne diseases including malaria, dengue fever and yellow fever. Some mosquitoes also carry the Zika virus, which was first thought to cause only mild fever and rashes.

Meet The Afghan Woman Who Refuses To Stay Silent After Her Husband Cut Off Her Nose. Why Poverty May Be More Relevant Than Race For Childhood Obesity. Studies show that kids' household income seems to be a more important predictor of their risk of becoming overweight and obese than their race or ethnicity. 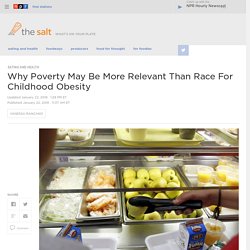 Kim Eagle, a professor of internal medicine and health management and policy at the University of Michigan, was skeptical of this thinking. "At first glance it looked like childhood obesity was more common among African-Americans or Hispanics," Eagle says. It's far from the first study to reach this conclusion. Prosperity brings new diseases to Brazil. El Salvador Recommends All Women Refrain From Getting Pregnant Until 2018. The Economist. Scientists create infertile mosquitoes. Image copyright SPL UK scientists say they have reached a milestone in the fight against malaria by creating a genetically modified mosquito that is infertile. 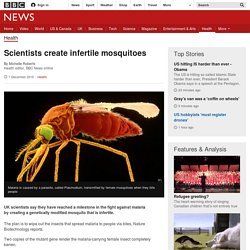 The plan is to wipe out the insects that spread malaria to people via bites, Nature Biotechnology reports. Two copies of the mutant gene render the malaria-carrying female insect completely barren. But one copy is enough for a mosquito mum or dad to pass it on to offspring. This should perpetually spread the infertility gene throughout the population so the species dwindles or dies out. Huffingtonpost. Huffingtonpost. Juliana Rotich: Meet BRCK, Internet access built for Africa. Huffingtonpost. Girls with goals. One of the most wonderful and positive choices any family can make is to educate their daughters through secondary school. 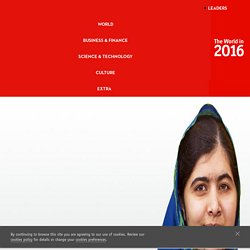 If girls are educated, everyone benefits. Girls develop the confidence and skills to make decisions about their lives and contribute fully to their communities. Yet in many parts of the world girls are offered little more than basic literacy and numeracy, even though secondary education is what provides wings for girls to fly. Solar-Powered Hearing Aids Are Music to the Ears of Kids Around the World. 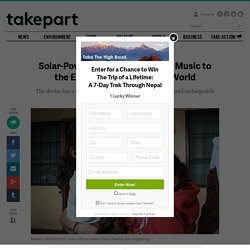 Meaning, I want to make sure that whatever I choose to do, it’s making a positive impact.” So far, the 18-year old Stanford freshman is off to a pretty good start. At 14, she founded the nonprofit Ears for Years, which has supplied hundreds of low-cost, solar-powered hearing aids to children in developing countries. And O’Brien has already received national attention as one of the 2015 winners of the Gloria Barron Prize for Young Heroes.

Untitled. A CONCRETE track meanders past nurseries of pine saplings and sheep grazing on stubble, petering out at Dayinghan, the poorest, most remote village in the stony hills of central Shanxi, a northern province. 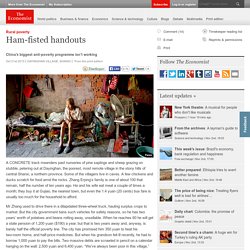 Some of the villagers live in caves. A few chickens and ducks scratch for food amid the rocks. Zhang Erping’s family is one of about 100 that remain, half the number of ten years ago. Gasping: South-East Asia’s pea-souper 2015-10-27. Opinion: We Can End Hunger. Here's How. The international community has embraced a new goal, the eradication of hunger by 2030. 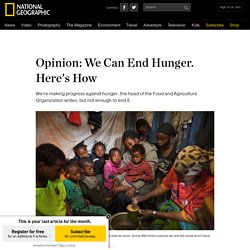 That makes us the zero hunger generation with a shared commitment to make hunger history. As we commemorate the Food and Agriculture Organization’s birth 70 years ago and celebrate World Food Day, we are reminded of FAO’s mission to ensure food security for all, everywhere. The zero hunger goal requires us to accelerate our efforts to reduce hunger and poverty to naught. Untitled. Eli Beer: The fastest ambulance? A motorcycle. Sakena Yacoobi: How I stopped the Taliban from shutting down my school. British tribunal victory for Indian worker. The UN sustainable development goals miss the point. Not many people enjoy the existence of poverty. 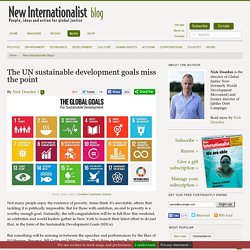 Some think it’s inevitable, others that tackling it is politically impossible. But for those with ambition, an end to poverty is a worthy enough goal. Malaria deaths cut by 60% since 2000 but UN says $6bn a year boost needed. Treated bednets, rapid diagnosis and effective medicines have combined to cut malaria death rates by 60% since 2000 – saving more than 6 million lives – but funding must be tripled to battle a disease that still threatens nearly half the world’s people and exacts a particularly heavy toll in Africa, said UN agencies. 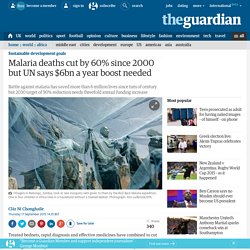 The millennium development goal of halting and beginning to reverse the incidence of malaria by 2015 has been convincingly met, said a joint report from the World Health Organisation (WHO) and the UN children’s agency, Unicef. It was calculated that new malaria cases have dropped by 37% in 15 years, and more countries are on the verge of eliminating the mosquito-borne disease. In 2014, 13 countries reported no cases, and six more reported fewer than 10, with the fastest decreases in the Caucasus and central and eastern Asia. Malaria: '700 million cases' stopped in Africa - BBC News. Explicit cookie consent. Weaving a home.. how one woman can help millions of people globally. A sustainable tent that collects rainwater, folds up for easy transport and stores solar energy? 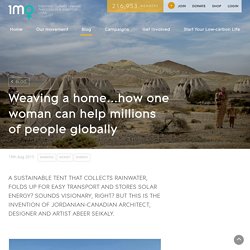 Sounds visionary, right? But this is the invention of Jordanian-Canadian architect, designer and artist Abeer Seikaly. [IMAGE: Abeer Seikaly] Seikaly designed these amazing multipurpose tents with refugees in mind, people who have been displaced by global and civil war, climate change and more. Inspired by elements of nature such as snake skin and traditional cultural aspects such as weaving, nomadic life and tent dwellings, this weather proof, strong but lightweight and mobile fabric tent gives refugees shelter but also a chance to "weave their lives back together". The flexible dual layer tent structure has the ability to close out the cold of winter and wet weather.

Solar energy hits the tent fabric and is stored in a battery for use at night providing renewable electricity. Why an iron fish can make you stronger - BBC News. When Canadian science graduate Christopher Charles visited Cambodia six years ago he discovered that anaemia was a huge public health problem. In the villages of Kandal province, instead of bright, bouncing children, Dr Charles found many were small and weak with slow mental development. Women were suffering from tiredness and headaches, and were unable to work. Pregnant women faced serious health complications before and after childbirth, such as haemorrhaging. Ever since, Dr Charles has been obsessed with iron.

Anaemia is the most common nutritional problem in the world, mainly affecting women of child-bearing age, teenagers and young children. Mechai Viravaidya: How Mr. Condom made Thailand a better place. School attacks around the world in data. The storming of a military school in Peshawar by the Taliban, who killed 132 children and nine teachers, horrified the world. But it wasn’t an isolated event; attacks on educational institutions seem to be increasing. Schools and universities everywhere – from Nigeria to Kenya and Afghanistan – have been targeted in recent years.

Last year the Global Coalition to Protect Education from Attack (GCPEA) published a report that documented deliberate attacks on schools, universities, their students and staff in order to provide data that could develop more effective policy in this area. It analysed conflicts in 70 countries between 2009 and 2013 and categorised how far they’d been affected. Brazil's bolsa familia scheme marks a decade of pioneering poverty relief.

As one of the poorest residents in the poorest county in Brazil, life has always been a struggle for Maria Eunice Alvis. The roof of her adobe home leaks during the storm season and vermin pose a constant threat to the health of her 10 children. There is so little money to go around, the family often goes hungry. Less pay, more work, no pension: the 21st-century woman's lot laid bare. Women earn on average 24% less than men, work more hours and have less chance of receiving a pension in later life, according to UN Women’s flagship report, which calls for an overhaul of global economic policies to improve women’s lives. The 2015 progress report, Transforming economies, realising rights, published on Monday, said current economic policies and discriminatory laws and attitudes are failing women in rich and poor countries.

He met dozens of kids who didn't have shoes. So he invented 5 pairs in 1. Shoes are hard to come by for too many children living in developing countries. Stats and Facts on Women in Power – The Fawcett Society. 28 February2013. 'Water man of India' Rajendra Singh bags top prize. Africa's first public-private water fund launched in Kenya. In a first for Africa, a public-private water fund was launched in Kenya on Friday, bringing together businesses, utilities, conservation groups, government and farmers to fund upstream water conservation through activities such as watershed protection and reforestation.

Moving mountains to help mothers. Hospitals are developing ways to ease pressure on A&E - BBC News. Is HIV still a death sentence in the West? - BBC News. Healthy dose of hope for one-use syringes - BBC News. Gallery: When reading is an act of daring. Explicit cookie consent. Rein in the tax dodgers! The world's poverty - in 50 seconds. Michael Green: What the Social Progress Index can reveal about your country. 2015 Could Be The Year Of Male Birth Control. Ending child marriage in Zambia. Ten steps towards a better world. Glasgow’s living-wage policy shames corporate giants. Ever Wonder Why People 100 Years Ago Died So Much Younger? It's These 14 Reasons.

Explicit cookie consent. The eradication of poverty is threatened by our dependence on partial data. Development Ideas that Work: Pay for Results and Data Analysis. The Problem With International Development—and a Plan to Fix It. Michael Pritchard: How to make filthy water drinkable. The one dollar contraceptive set to make family planning easier. UK has ‘signed a death warrant’ for South Africans with HIV-Aids. It's Young Girls and Women on the Front Lines of the Ebola Crisis  Number Of Billionaires Has Doubled Since Financial Crisis Began, Oxfam Says.

Infographic Shows The Differences Between The Diseases We Donate To, And The Diseases That Kill Us. India Is Building New Toilets Every Second—but Hardly Anyone Is Using Them. Health Expert: 'No Strategic Plan' For Controlling Ebola Outbreak. I Love It When Smart People Come Up With Solutions That Seem Obvious Once They've Thought Of Them. AIDS Has Killed Almost 36 Million People, But I Bet You've Never Heard The Real Origin Story. These 10 Photos Reveal The Frustrating Reality Of Education In Liberia. Which Disease Kills The Most People, By Country. Siberian Medical Train. Stark Photos Of Inequality In Mexico City Show A Metropolis Divided.

No child should be afraid to drink a glass of water ... Bill Nye Gets A Bit Somber But Knocks Out Some World Poverty Myths In 2 Minutes. Global inequality is about power, not just wealth. The End of Poverty - www.confutatis.org. What Does Your Life Expectancy Have To Do With Your Zip Code? Everything. Some Call It The Miracle Of Life. They Call It An Inescapable Curse. This invention looks like a tiny sleeping bag and it's helped save 150,000 babies. Explicit cookie consent.