Samsung to launch new Galaxy A smartphones on April 10. When will Galaxy A90 launch? 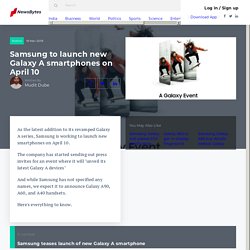 Asked 3 minutes ago by Vishal Balasubramanium Answered by NewsBytes Samsung is expected to launch Galaxy A90 on April 10. What are the specifications of Galaxy A90? Asked 3 minutes ago by Aaradhya Patil The Galaxy A90 is likely to sport a 6.41-inch AMOLED display with a sliding and rotating camera. Who.is. Google Pixel 4 Xl News: Latest Timelines and Updates on Google Pixel 4 Xl at NewsBytes. Update WinRAR: Hackers are exploiting 19-year-old bug, installing hard-to-detect malware. Make your house a smart home with these products.

Product categories for smarter decisions In this article, we have listed the key categories under which you can find smart home products. 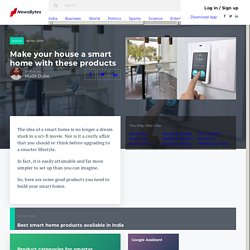 We have also tried to pick the best options available so that your work is substantially reduced. Let us dive in. Google's lower-cost phones may launch as Pixel 3a, 3a XL. RIPE Network Coordination Centre. Soon, teens can experience consequences of overdrinking in VR. This Facebook Messenger bug exposed who you chat with. Next-gen USB 4 standard announced, promises 40Gbps transfer speed. Apparently, Samsung has sent foldable display samples to Apple, Google.

Utility - Port Listener. Hackers can spy on Amazon's doorbell video feed: Here's how. Facebook tracks location of users whom it considers 'credible threats' This could be our first look at Vivo's foldable smartphone. Hackers can use Google Translate to steal your password. Ping.eu. Samsung's Galaxy M20, Galaxy M10 go on sale today. What is the price of Galaxy M10 in India? 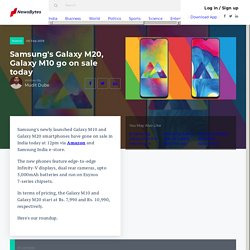 #TechBytes: How password managers can keep you safe online. By typing Captcha, you are actually helping Google. Read how. Definition Google defines Captcha as system that protects your website Let's first discuss what is commonly known about Captcha. 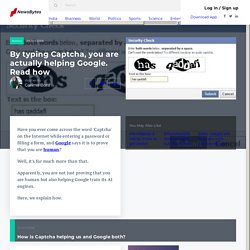 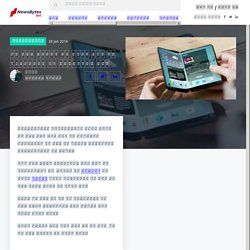 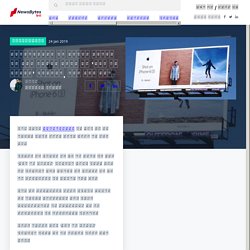 Yammer. Want to get verified on Instagram? Here's a quick guide. FoldiMate's fridge-sized robot could fold your laundry: Here's how. Product FoldiMate and its laundry-folding machine FoldiMate, a California-based company, has showcased a working robot that folds clothing items, from pants and collared shirts to towels and pillow covers, in a matter of seconds. 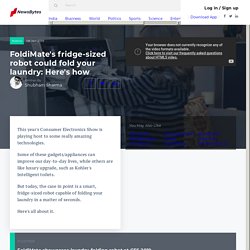 It looks a like a mini-fridge eating up space, but can fold a single piece of clothing in about 5 seconds and a full load of laundry, consisting around 25 items, in under 5 minutes. Working The machine works like a printer. #CastHack: Thousands of Chromecasts hacked to promote YouTuber PewDiePie. Bug details Bug stemmed from poorly configured routers Chromecast dongles are pretty secure, but in the latest 'CastHack', the hackers demonstrated how the devices can be tricked into playing anything. 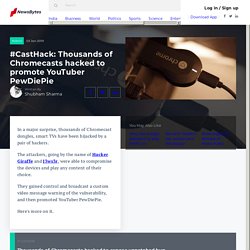 The problem, as they noted in the video message, is an improperly configured router, which exposes the connected device on the internet. It makes the device publicly viewable and accessible, allowing attackers to gain control and play whatever they want to. Universal Plug and Play Settings to be blame Routers have Universal Plug and Play (UPnP) settings to help users add devices. 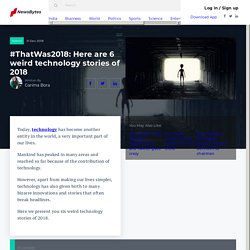 In September, the Tesla owner smoked marijuana, drank whiskey and wielded a sword, all on a live-show with comedian Joe Rogan. Obviously, the video clip of Musk taking a puff and shrugging went viral on the internet and netizens were left with jaw-dropping reactions. Tesla shares dropped by 6% following marijuana incident. BGP History. Xiaomi Redmi 6A goes on sale today: Specifications, price, offers. 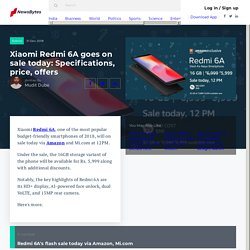 Freebies. Sony Xperia XA3 Plus price leaked: Details here. From the grapevine Sony Xperia XA3 Plus: Everything we know so far According to DroidShout, the Sony Xperia XA3 Plus is expected to feature a larger display measuring over 6.0-inches and will have a full-HD+ resolution. Moreover, the phone is said to have an aspect ratio of around 18:9 or more. The blog also claims that Xperia XA3 Plus will launch in three colors - Black, Gold, and Silver. This good looking Huawei smartphone may not launch in India. Design and display Huawei P Smart 2019: At a glance Up front, the phone sports an edge-to-edge "Huawei DewDrop Display" with a sizeable bottom bezel.

On the rear, you have a dual-tone gradient design which offers "glossy ceramic-like texture" - quite an eye-catcher. Further, the Huawei P Smart 2019 features a 6.21-inch full-HD+ display with a resolution of 2340 x 1080 pixels, 19.5:9 aspect ratio and an Eye Comfort Mode (blue light filter). Camera For the shutterbugs and selfie lovers On the back, the Huawei P Smart 2019 sports a dual camera setup comprising a 13MP main sensor with an f/2.2 aperture and a 2MP secondary sensor.

While calculating multi-core scores, Geekbench runs multiple streams of instructions simultaneously per core and reports an aggregate score. With single-core scores, the same process is applied but on a single core. Notably, the quicker a CPU completes the instructions, the higher is its Geekbench score. Key specs. Motorola P40 to feature 48MP rear camera, in-screen camera design.

Notch or hole? Like others, Moto P40 will also adopt in-screen camera design The in-screen camera design, which looks to replace the notch trend, is gaining popularity rather quickly. We have already seen Galaxy A8s, Honor View 20 (V20), and Nova 4 sport this punch-hole setup for the front camera. And joining these new smartphones, we now have Motorola P40 which will feature a selfie camera hole on the top left corner of the screen.

Display. HMD Global releases Android Pie update for Nokia 5.1 Plus. Here's the official announcement Features What's new in the update? Realme A1 to soon launch as company's new budget smartphone. Portfolio Currently, Realme has four smartphones in its lineup The Realme C1 is the most affordable option in the lineup. The phone has recently received a hike of Rs. 1,000 and now retails for Rs. 7,999. Stribe Opens Its API To Battle Orcs And Wizards And Such. Stribe launched at our TechCrunch50 event last year as a way to easily add a social networking layer to any site. (A few months later, they won the LeWeb startup competition.)

By July of this year, they were open for all to try out and use. Honor View 20, featuring 48MP-camera, to launch "soon" in India. Design and display. Redmi 6A flash sale today via Amazon, Mi.com: Details here. Pricing of Redmi 6A in India. Flipkart sale: Pixel 3 now available at Rs. 60,000. Huawei P30 Pro tipped to get five cameras, waterdrop notch.