Membership – Exciting Benefits and Features – School of Dragons. Dragon Shooting - Fire Training. One of the most exhilarating skills a dragon can learn is fire breathing. 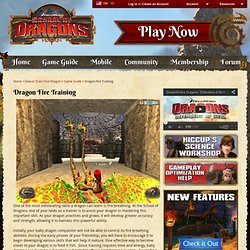 At the School of Dragons, one of your tasks as a trainer is to assist your dragon in mastering this important skill. As your dragon practices and grows, it will develop greater accuracy and strength, allowing it to harness this powerful ability. Initially, your baby dragon companion will not be able to control its fire breathing abilities. 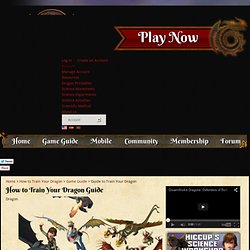 However, what can often be overlooked is that training a dragon is not about discipline or forcing your pet to obey you, but about the bond between dragon and rider. As we learned from Hiccup, there are certain things that will help a Viking train his dragon to be an obedient, loyal companion. First, the way to a dragon’s heart is through its stomach. Dragons love eating fish so keep this in mind when trying to motivate or encourage them in dragon school. If your dragon breathes fire for the first time or is able to hover above the ground momentarily, reward it with some delicious fish. 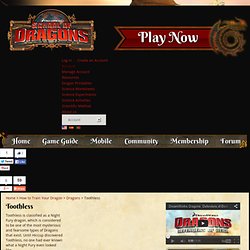 Until Hiccup discovered Toothless, no one had ever known what a Night Fury even looked like. In the Journal of Dragons, he is placed in what is known as the Strike Class. He has the key ability to ‘Dive Bomb’, meaning he dives from heights, gaining ridiculous speed at a downwards angle and shoots his lightning ball. A Night Fury only attacked in the dead of night because it was virtually invisible. For a long while, nobody knew what an actual Night Fury looked like. Physically, he is of medium sized build with jet black scales covering his body. Toothless is very playful, active, and intelligent; observing what Hiccup does and mimicking him in certain scenarios.

Toothless wins over the hearts of many others, showing Vikings like Astrid, Stoick, and Gobber that these dragons are capable of friendship and respect. Barf and Belch – How to Train Your Dragon. Barf and Belch are the two heads of the Hideous Zippleback dragon that Ruffnut and Tuffnut ride when confronting the Red Death. 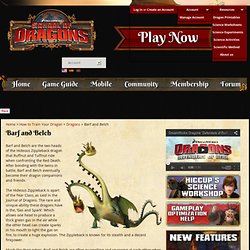 After bonding with the twins in battle, Barf and Belch eventually become their dragon companions and friends. The Hideous Zippleback is apart of the Fear Class, as said in the Journal of Dragons. The rare and unique ability these dragons have is the, ‘Gas and Spark’. Which allows one head to produce a thick green gas in the air while the other head can create sparks in his mouth to light the gas on fire, to create a huge explosion. Stormfly – How to Train Your Dragon. Stormfly is a Deadly Nadder dragon. 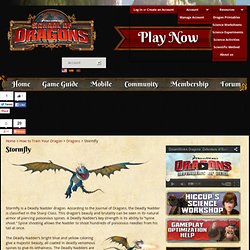 According to the Journal of Dragons, the Deadly Nadder is classified in the Sharp Class. This dragon’s beauty and brutality can be seen in its natural armor of piercing poisonous spines. A Deadly Nadder’s key strength is its ability to “spine shoot.” Spine shooting allows the Nadder to shoot hundreds of poisonous needles from his tail at once. The Deadly Nadder’s bright blue and yellow coloring give a majestic beauty, all coated in deadly venomous spines to give its lethalness. Astrid first encountered Stormfly during one of the young Vikings training sessions on ‘learning how to attack’. 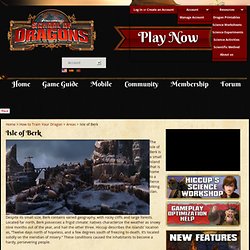 Despite its small size, Berk contains varied geography, with rocky cliffs and large forests. Located far north, Berk possesses a frigid climate; natives characterize the weather as snowy nine months out of the year, and hail the other three. Hiccup describes the islands' location as, “Twelve days north of hopeless, and a few degrees south of freezing to death. Help. Mobile. School of Dragons is pioneering seamless online and mobile gameplay in the educational massively multiplayer online role-playing game space! 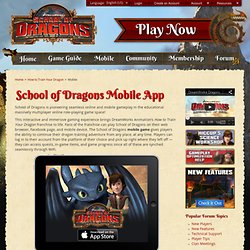 This interactive and immersive gaming experience brings DreamWorks Animation’s How to Train Your Dragon franchise to life. Fans of the franchise can play School of Dragons on their web browser, Facebook page, and mobile device. The School of Dragons mobile game gives players the ability to continue their dragon training adventure from any place, at any time. Players can log in to their account from the platform of their choice and pick up right where they left off — they can access quests, in-game items, and game progress since all of these are synched seamlessly through WiFi.

Now Available On... iPad 2, 3, 4, iPad mini, iPad Air and iPad mini air (internet connection required). Experience live, 3D MMO gameplay on-the-go. Take science learning to the next level with your Viking buddies. Komodo Dragons - Free Komodo Dragon Printables for Kids. Choosing Your Dragon - Dragons & Vikings. One of the most exciting moments in a young Viking’s life is the moment when they toss their dragon egg into the fires of the Hatchery. 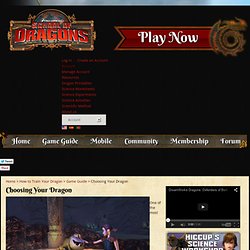 Deciding between dragons may seem like a difficult choice to take on, but don’t worry that task is beyond anyone’s control. Ultimately, the deep bond shared between a Viking and his or her dragon is a special Viking sort of science that cannot be fully explained. Since peace was made between Vikings and dragons, the most ideal of bonds have been formed from the compatibility of personalities. 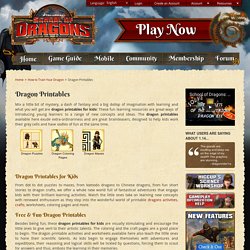 These fun learning resources are great ways of introducing young learners to a range of new concepts and ideas. The dragon printables available here exude extra-ordinariness and are great brainteasers, designed to help kids work their grey cells and have oodles of fun at the same time. Dragon Printables for Kids From dot to dot puzzles to mazes, from komodo dragons to Chinese dragons, from fun short stories to dragon crafts, we offer a whole new world full of fantastical adventures that engage kids with their brilliant learning activities. Dragon Activities - Free Dragon Activity Sheets. Dragon Puzzles - Free & Challenging Dragon Puzzles for Kids. Quiz. Hiccup and Toothless – How to Train Your Dragon.

Hiccup and Toothless' bond was no easy road. 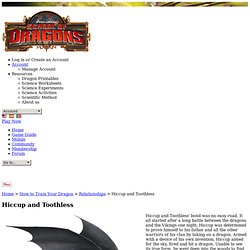 It all started after a long battle between the dragons and the Vikings one night, Hiccup was determined to prove himself to his father and all the other warriors of his clan by taking on a dragon. Armed with a device of his own invention, Hiccup aimed for the sky, fired and hit a dragon. Unable to see its true form, he went deep into the woods to find it, overcome with excitement. Upon finding the wounded dragon in the woods, Hiccup was initially prepared to kill it and prove to his clan that he is a true Viking with the abilities to take down one of the most fearsome and mysterious dragons of them all, a Night Fury. As he crept up behind the dragon, he raised his dagger and looked into the eyes of the beast itself and paused. Stormfly and Astrid – How to Train Your Dragon. Astrid and Stormfly’s journey first began during Viking training and, more specifically, when the young students began sessions on ‘learning how to attack’.

This was the first time that the two met and from that moment on they revealed themselves to have compatible character traits. These two strong and beautiful partners are similar in that they both are tough, stubborn, and obedient when necessary. Astrid first rides Stormfly in the battle against Red Death. Astrid – How to Train Your Dragon Viking. Astrid is considered to be one of the smartest and toughest teen Vikings in the Isle of Berk. This feisty and fearless young Viking is not someone to be messed with as she displays great skills and training.

She works incredibly hard, has a tough attitude and is often looking for ways to prove herself as one of the best Vikings in all of Berk. Astrid tends to be extremely observant of others, prideful, and very goal-driven in whatever she pursues. Her dedication and desire to be the best allows her to outshine her fellow teen Vikings in training. At first, Astrid despises Hiccup, looking down on his inabilities as a fighter and often views him as just another obstacle in her training. Her perception of the dragons was like any other Viking, hateful and ready for battle. Hiccup Horrendous Haddock III – How to Train Your Dragon. Hiccup Horrendous Haddock III, more commonly referred to as ‘Hiccup,’ is the son of the Viking chief, Stoick the Vast. He is thin and somewhat and does not fit the common characteristics of the average Viking boys his age. Because of this, Hiccup struggles to identify with the traditional Viking culture, which at times puts him at odds with his father and other members of their Viking clan.

As the assistant of the local blacksmith, Gobber, Hiccup excels in other avenues and exhibits a great sense of inventiveness, creativity, and smarts. What Hiccup lacks in physical strength while in Viking training, he makes up for by being able to interact with dragons, which his clan had been traditionally trained to kill. Ruffnut and Tuffnut – How to Train Your Dragon. Ruffnut and Tuffnut are fraternal twins that participate in dragon training with Hiccup.

The twins are constantly arguing and fighting, often resolving their petty debates by hitting each other. Despite their incessant bickering, they are always together and work as a team. Science Worksheets - Free Online Science Worksheets for Kids. Science is one of the most important subjects that kids get to learn at school. If introduced to in the right way, it can also become one of the most interesting subjects. Help your kids develop a keen interest in the subject with the science worksheets available at School of Dragons. Free Science Worksheets for 3rd Grade. 3rd grade science is all about discovery. Free Science Worksheets for 4th Grade. Scientific Method Activities – Free Educational Resources for Kids. The scientific method of acquiring new knowledge is based on empirical evidence (that which is the result of observed behavior) and measurable facts. These printable Scientific Method Activities help your child understand the fundamentals of science in a hands-on manner.

These are some important terms associated with the Scientific Method. 1. Hypothesis This is a statement consisting of some observations without being backed by experimental evidence. 2. This is a statement consisting of one or more observations that are supported by plenty of experimental evidence. 3. Science Games – Free Science Games for Kids. Dragon Mazes - Fun Online Dragon Mazes for Kids. Dragon Coloring Pages - Free Dragon Pictures to Color.