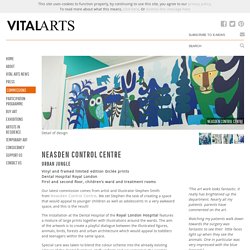 We set Stephen the task of creating a space that would appeal to younger children as well as adolescents in a very awkward space, and this is the result! The installation at the Dental Hospital of the Royal London Hospital features a mixture of large prints together with illustrations around the wards. Fredrikson Stallard celebrates 10 years with Momentum collection. London Design Festival 2015: UK design studio Fredrikson Stallard has produced a collection of sculptural furniture – including a sofa that looks like a chunk of rock – to mark its 10th anniversary (+ slideshow). 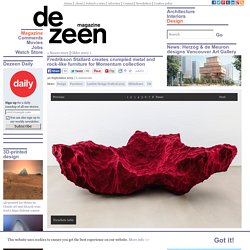 Fredrikson Stallard's Momentum collection includes 10 new pieces that were displayed at the studio's headquarters in Holborn during the London Design Festival. VW takes 4,000 cars off the UK market - BBC News. Image copyright Getty Images Volkswagen is suspending the sale of 4,000 vehicles in the UK in the wake of the emissions scandal. 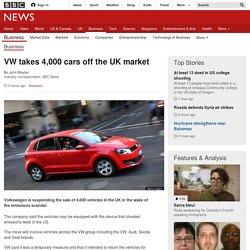 The company said the vehicles may be equipped with the device that cheated emissions tests in the US. LG V10 smartphone has two selfie cameras - BBC News. Image copyright LG LG has revealed a phone that takes wide-angle selfies and an updated 4G smartwatch, now running on Android. 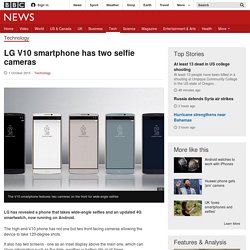 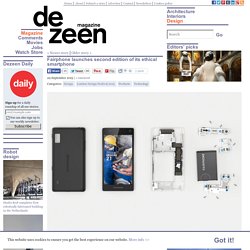 The Fairphone 2 has been created in partnership with London design and branding agency Seymourpowell, and features a five-inch (12.7 centimetre) LCD display covered in damage-resistant Gorilla Glass. The handset runs on the Android 5.1 Lollipop operating system, and offers 32 gigabytes (GB) of storage. It's bigger in size and memory than its predecessor, which had a 4.3-inch (10.9 centimetre) screen, and just 16GB of memory.

The phone is designed to be easily taken apart and repaired to increase its lifespan – similar to Google's Project Ara prototype – as an alternative to current fast-moving smartphone trends. Fairphone hopes this will reduce the enormous amount of electronic waste currently contributed by discarded consumer electronics – reported to be 41 million tonnes worldwide. The Current Table by Marjan van Aubel features a solar panel for charging mobile phones. Stained glass window harvests energy to charge devices. This window by Dutch designer Marjan van Aubel is made up from coloured solar cells that harvest energy from the sun and convert it into electricity to charge small computer devices. 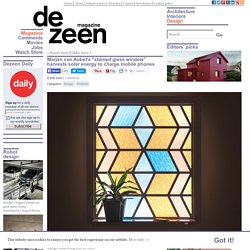 The organically dyed solar cells in van Aubel's Current Window generate electricity from the sun – a process derived from photosynthesis, which plants use to convert sunlight into energy. Sunlight is collected within the orange, blue and pink dye-sensitised solar cells, which are arranged in a tessellating zig-zag pattern created by van Aubel and London-based graphic designer Marine Duroselle. The light-absorbing dyes cover tiny particles of titanium dioxide that convert the energy into electrical current. Mixed Messages. When in New York, in December, take advantage of 50-degree temperatures. 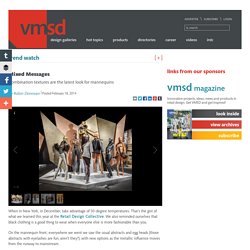 That’s the gist of what we learned this year at the Retail Design Collective. We also reminded ourselves that black clothing is a good thing to wear when everyone else is more fashionable than you. On the mannequin front, everywhere we went we saw the usual abstracts and egg heads (those abstracts with eyelashes are fun, aren’t they?) , with new options as the metallic influence moves from the runway to mainstream. We also caught a glimpse of something a bit edgier than textured trends – you might call it a combination texture, and it’s one step past mixed media. Like the athletic mannequins we saw in spades last year (these continue to be adopted by retailers), some of these styles are on the bleeding edge. Originally planned as a local touch, Jack Hruska, executive vp of creative services, says he was pleased enough with the outcome to consider a wider rollout in the future. Lay of the Land. Color Coded. What could humans possibly have in common with cyanobacteria, fungi and other animal species? 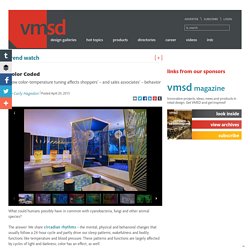 The answer: We share circadian rhythms – the mental, physical and behavioral changes that usually follow a 24-hour cycle and partly drive our sleep patterns, wakefulness and bodily functions like temperature and blood pressure. These patterns and functions are largely affected by cycles of light and darkness; color has an effect, as well. The Silent Sellers are Speaking Out.

Any tour of the major visual merchandising trade shows around the world shows significant changes in the way mannequins are designed and made. 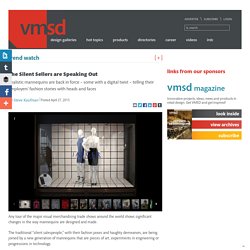 The traditional “silent salespeople,” with their fashion poses and haughty demeanors, are being joined by a new generation of mannequins that are pieces of art, experiments in engineering or progressions in technology. The digital communications age that has commanded so many of our electronic devices has been incorporated into mannequins, too, with digital screens displaying brand messages, and even personalized messages being sent, via beacon technology, to shoppers. Visual Merchandising Trend Forecast S/S 15 and F/W 15 on Behance. Next Store: Wearable and Connected Tech. An estimated four million Apple Watches were sold to consumers during this year’s Q2, according to Strategy Analytics (Boston) – are you one of those consumers? 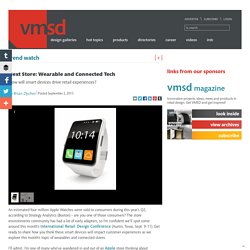 The store environments community has had a lot of early adapters, so I’m confident we’ll spot some around this month’s International Retail Design Conference (Austin, Texas, Sept. 9-11). Get ready to share how you think these smart devices will impact customer experiences as we explore this month’s topic of wearables and connected stores.