I Have the Right To. ADHD & Me. All That Is Bitter and Sweet. Highly Recommend! 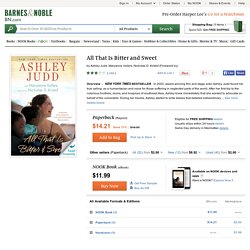 I was immediately drawn to buy Ashley's book when it first became available. Growing up listening to The Judd's music, and seeing Naomi and Wynona on talk shows lately (sans Ashley) to promote their new OWN show, I was intrigued to read Ashley's story. Ashley begins her journey reflecting on her own childhood issues of abandonment, rejection, depression, isolation, loss of family connection, and sexual abuse. While she talks about these issues very openly, Ashley is not screaming "I am a victim" or "Naomi is a horrible mother". Rather, she reveals very openly how those issues affected her and what she did to move past it. Ashley's book cannot be read without wanting to do something and help others. Amen, Amen, Amen. As Nature Made Him. Autobiography of a Face. A Must Read (though maybe not for a cancer patient) This book is moving, dramatic, beautifully written, and truly a must read. 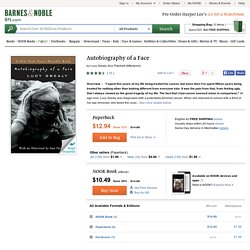 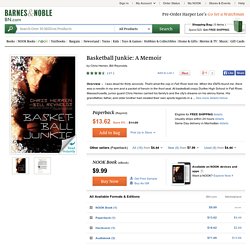 This story mainly teaches people not to do drugs. Beautiful Boy. Introduction It hurts so bad that I cannot save him, protect him, keep him out of harm's way, shield him from pain. 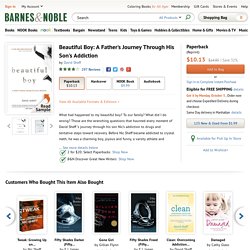 What good are fathers if not for these things? —Thomas Lynch, "The Way We Are" Being Jazz. “Jazz Jennings is one of the youngest champions of transgender equality.” 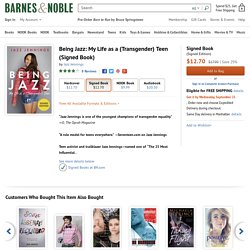 —O, The Oprah Magazine “A role model for teens everywhere.” —Seventeen.com on Jazz Jennings Teen activist and trailblazer Jazz Jennings—named one of “The 25 Most Influential Teens” of the year by Time—shares her very public transgender journey, as she inspires people to accept the differences in others while they embrace their own truths. Jazz Jennings is one of the youngest and most prominent voices in the national discussion about gender identity. At the age of five, Jazz transitioned to life as a girl, with the support of her parents.

A year later, her parents allowed her to share her incredible journey in her first Barbara Walters interview, aired at a time when the public was much less knowledgeable or accepting of the transgender community. Believe: The Victorious Story of Eric LeGrand. Beyond Belief: Finding the Strength to Come Back. Josh Hamilton is one of my all time favorite athletes, so decided to read his inspiring biography, "Beyond Belief" by himself with Tim Keown. 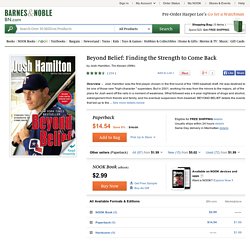 This amazing book has showed me the deepest depths of extreme drug addictions and how Josh Hamilton dealt with his life threatening flaw. It is hard to believe that anybody associated with drugs could have ever been drafted straight out of high school as the first overall pick for the MLB. Josh Hamilton grew up in North Carolina, and began playing baseball at a young age. By age 13, Josh was already being peered by scouts from the MLB and colleges all around the country. Breaking Night: My Journey from Homeless to Harvard. Inspiring and Empowering! 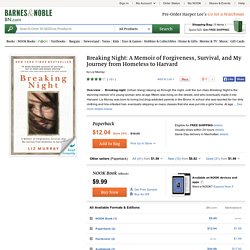 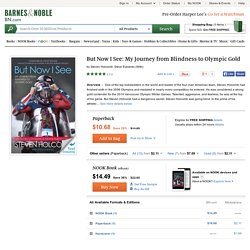 It looks like this has been done with a lot of care and the writer Steve Eubanks has penned books for Lou Holtz, Jeff Gordon and Arnold Palmer. He must have really liked Holcomb to include him in a great group like that. Certainly, the book took me a few days to read, but it was worth the $15 bucks. Was this review helpful? A Child Called "It": One Child's Courage to Survive. The Unbelievable A Child Called It tells the true story of a young boy, who is abused both physically and mentally by his own mother and family members. 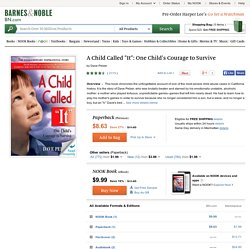 Day after day, he endures brutal "games" that "The Mother" has planned for him, never knowing when he will ever eat, set foot in the sun, or see his own father again. His family strips him of his very existence, while treating him like he is lower than a slave, until his heart turns cold and hates everything in sight. However, Dave looks up to his father, who he considers his "hero," only to find that superman doesn't exist. At school, he fears telling the truth, terrified that he will never be free. The Lost Boy: A Foster Child's Search for the Love of a Family. Are you ready to see reality? 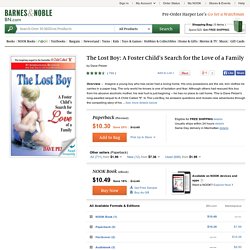 My name Is Holly and I am a junior at Holt High School and I have just finish reading The Lost Boy by Dave Pelzer. This book is an autobiography and is a follow up to Dave Pelzer's book A Child Called "It". I must say that this is one of my favorite books that I have ever read. The Day the Voices Stopped: A Memoir of Madness and Hope. Recommended The Day the Voices Stopped Ken Steele suffers a mental disease of schizophrenia, from the age of fourteen has been taunted by voices of the devil pressuring him to commit suicide, belief in his fidelity of paranoia, drags him to the edges of hell with the demon himself luring him in. Dear Nobody: The True Diary of Mary Rose.

Someone help. Anybody, somebody, everybody, nobody? Mary Rose. Echoes of an Angel. Echoes of an Angel the miraculous TRUE STORY of a boy who lost his eyes but could still see By AQUANETTA GORDON, CHRIS MACIAS Tyndale House Publishers, Inc. Copyright © 2014 Aquanetta Gordon All rights reserved. Elena Vanishing: A Memoir. Publishers Weekly 04/06/2015In a raw memoir, Elena Dunkle, writing with her mother, documents her long struggle with anorexia nervosa, beginning when she was an overachieving teen; Clare Dunkle’s parallel account, Hope and Other Luxuries, is being published for adults simultaneously. (The publishing setup recalls that of David and Nic Sheff’s father-son memoirs of drug abuse.)

By the time Elena starts on the real road to recovery, she has been through numerous hospitalizations, treatments centers, and therapy sessions, and she has “purged so much” that she can no longer tolerate a feeding tube. Fast Food Nation: The Dark Side of the All-American Meal. Strong Bias Hurst Otherwise Great Book 106 years ago, Upton Sinclair revolutionized the food industry, uncovering the dirty secrets of food production. Fast forward to the present and Eric Schlosser is attempting to once again revolutionize how America eats by exposing the flaws with the fast food industry. He argues that the commercialized industry of fast food has changed how we as Americans live. Schlosser takes the reader on two tours. The first is the oft-repeated success stories of Ray Kroc, the founder McDonalds, and other fast food titans.

Fat No More: A Teenager's Victory over Obesity. Finding Me. Food Rules an eaters manual. Introduction Eating in our time has gotten complicated—needlessly so, in my opinion. For the Benefit of Those Who See. Freaking Out. School Library Journal 12/01/2013Gr 7–10—In an introductory chapter, Wells describes the symptoms of anxiety and panic attacks and differentiates between fear and anxiety.

Girlbomb: A Halfway Homeless Memoir. The Game of My Life. The Glass Castle. Winning Best Memoir Prize in my class. The Good Food Revolution: Growing Healthy Food, People, and Communities. Good food, good body. Heart of Iron: My Journey from Transplant Patient to Ironman Triathlete. Her Lost Year. In the spring of 2010, Tabita Green's daughter, Rebecka-then in seventh grade-started to feel depressed and lost a lot of weight.

Almost immediately, Rebecka's well-meaning health care providers recommended that she take an antidepressant (Zoloft) to "kick-start" the treatment process. What followed was a year-long nightmare of the most unimaginable sort as Tabita and her husband, Todd, watched their funny, bright daughter transform into a psychiatric patient. Rebecka was hospitalized numerous times for suicidal ideations and psychosis-unable to function in the real world. Hidden Girl: The True Story of a Modern-Day Child Slave. Hope and Other Luxeries. I Don't Want To Be Crazy. I¿m no expert on free verse, but I¿m not certain that taking eve I’m no expert on free verse,but I’m not certain thattaking everyday sentences andbreaking them into stanzas counts as poetry.

In His Sights: One Woman's Stalking Nightmare. Good Read, Interesting Topic. Iron Heart: The True Story of How I Came Back from the Dead. January First: A Child's Descent into Madness and Her Father's Struggle to Save Her. Just Don't Fall. Kicking Up Dirt. Laughing at my Nightmare. Life Without Limits. Look Me In The Eye: My Life With Asperger's. Loose Girl. Luckiest Man. Lucky. Lucky Man. No Excuses. Mermaid. Methland. Moving Violations. Needles: A Memoir Of Growing Up With Diabetes.

Not Dead Yet: My Race Against Disease. The Omnivore's Dilemma: The Secrets behind What You Eat. Plants vs. Meats. The Pregnancy Project: A Memoir. Quiet Power. Regine's Book: A Teen Girl's Last Words. Rethinking Normal. Sentenced to Life. She's Not There: A Life in Two Genders. Sickened: The True Story of a Lost Childhood. Skinny Boy. Smashed: Story of a Drunken Girlhood. Smoke Gets In Your Eyes. Soul Surfer: A True Story of Faith, Family, and Fighting to Get Back on the Board. Stick Figure: A Diary of My Former Self. A Stolen Life: A Memoir by Jaycee Dugard. Stolen Innoncence. Stronger.

Ten Minutes from Home by Beth Greenfield. This Star Won't Go Out. Thunder Dog: The True Story of a Blind Man, His Guide Dog, and the Triumph of Trust. Touch the Top of the World: A Blind Man's Journey to Climb Farther than the Eye Can See. Tuesdays With Morrie. Tweak: Growing Up on Methamphetamines. Unbearable Lightness: A Story of Loss and Gain. We Should Hang Out Sometime. A Work In Progress.