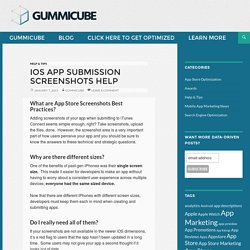 Adding screenshots of your app when submitting to iTunes Connect seems simple enough, right? Take screenshots, upload the files, done. However, the screenshot area is a very important part of how users perceive your app and you should be sure to know the answers to these technical and strategic questions. Why are there different sizes? One of the benefits of past-gen iPhones was their single screen size. Now that there are different iPhones with different screen sizes, developers must keep them each in mind when creating and submitting apps. Do I really need all of them? If your screenshots are not available in the newer iOS dimensions, it’s a red flag to users that the app hasn’t been updated in a long time. Even if your app was designed with only the smaller iPhone screen in mind, you can still show users how it will look on multiple devices.

Ability to reset IEnumerator generated using yield (C#) Unity 4.2 - Seeing Crash on iOS Device when using SystemInfo.deviceUniqueIdentifier. Windows 10 and Unity. Which Unity project files can be ignored for version control? ReferenceResolution.cs. Swipe help please. How do I make a seamless hex tile? In this post I give two methods for making hexagonal tiles that will tile seamlessly. 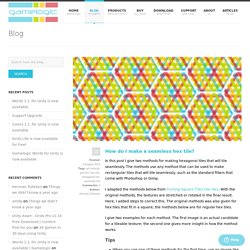 The methods use any method that can be used to make rectangular tiles that will tile seamlessly, such as the standard filters that come with Photoshop or Gimp. I adapted the methods below from Turning Square Tiles into Hex. With the original methods, the textures are stretched or rotated in the final result. Here, I added steps to correct this. The original methods was also given for hex tiles that fit in a square; the methods below are for regular hex tiles.

I give two examples for each method. Tips When you use one of these methods for the first time, use an image like the second one (and use the size 1024×1024) to go through all the steps. Method 1 Take an image you want to use as base. Let’s assume you want to make a flat hex tile with height S, and that your texture is S × S. 1Scale the image to size S × √3S, in other words, scale the width by 173%. 2Crop a S x S square anywhere from the image. Level design - Why don't we use octogonal maps instead of hexagonal maps? CSI: My Computer - What is netsession_win.exe from Akamai and how did it get on my system? How do I monitor anonymous background programs eating up my bandwidth and data? - Security - Windows 7. Recommended Solution: Download the Official Driver Update and Repair Utility [Sponsored] www.driverupdate.net. 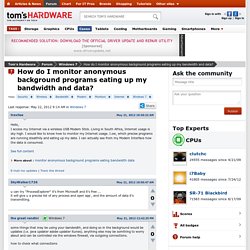 How do I Remove null components ( i.e. "Missing(Mono Script)" ) via editor script? I have made a script somewhat similar to this one: But rather than just finding the null entries, I simply want to sweep through and delete them all. 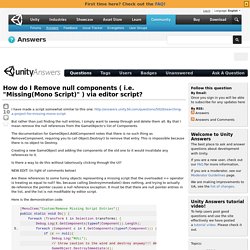 By that I mean remove the null references from the GameObjects's list of Components. The documentation for GameObject.AddComponent notes that there is no such thing as RemoveComponent, requiring you to call Object.Destroy() to remove that entry. This is impossible because there is no object to Destroy. Creating a new GameObject and adding the components of the old one to it would invalidate any references to it. 4.6 UI Image follow mouse position? So in my inventory I have this Picker object that's supposed to pick up items and have them follow the mouse. 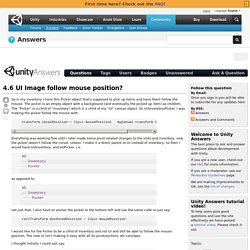 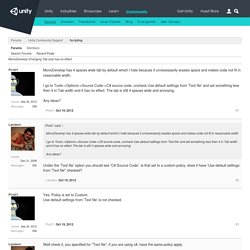 Pirs01 Joined: Sep 30, 2012 Messages: 356 MonoDevelop has 4 spaces wide tab by default which I hate because it unnecessarily wastes space and makes code not fit in reasonable width. I go to Tools->Options->Source Code->C# source code, uncheck Use default settings from 'Text file' and set something less then 4 in Tab width and it has no effect. The tab is still 4 spaces wide and annoying. UnityEngine.UI.dll is in timestamps but is not known in assetdatabase. Full Inspector: Inspector and serialization for structs, dicts, generics, interfaces.

Is there a way to define a list of ScriptableObjects that implements only a specific interface? 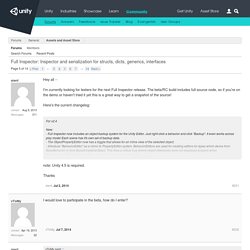 I tried to use List But as soon I choose one of the implementation listed in the inspector dropdown it raises an exception: Attempting to recover from serialization error Error converting value 0 to type 'BRA.Framework.Data.IDataContainer'. OpulateList(IWrappedCollection, JsonReader, String, JsonArrayContract) (at Assets/Plugins/JsonDotNet/Source/Serialization/JsonSerializerInternalReader.cs:741) Newtonsoft.Json.Serialization. How To Fix SVN Inconsistent Line Ending Style Error. How make visible the back face of a Mesh. Manual: Importing Objects From Cinema 4D. Importing Objects From Maya Importing Objects From 3D Studio Max Suggest a change. 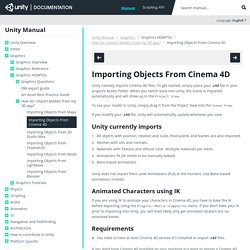 ORK Framework – The complete RPG Engine for Unity. Kavorka Games. Spanki's Prop Shop: Downloads / Additional Cinema 4D plugins (free) Multiple DropBox Instances on Windows 7. We recently had a need to run two DropBox instances concurrently on a few of our Windows 7/Vista workstations (if you are running Mac or Linux there are alternate methods to do this documented here. 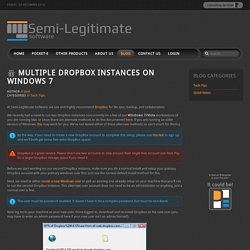 If you are running an older version of Windows, this may work for you. We've not tested either of these alternate methods so can't vouch for them.). By the way, if you need to create a new DropBox account to complete this setup, please use this link to sign up and we'll both get some free extra DropBox space! 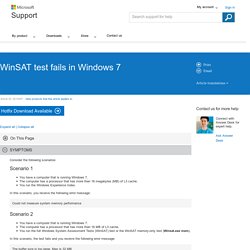 This issue occurs because the hard-coded buffer size limitation is 32 MB. Adobe CC 2014 Direct Download Links: Creative Cloud 2014 Release. [UPDATE (November 2016) – These still work to download the older CC 2014 trials. We also now have Adobe’s all-new CC 2017 Direct Download Links!] The all-new Adobe CC 2014 release was announced earlier today, with hundreds of new features compared to earlier creative versions… And there’s no wait: the CC 2014 software is available immediately for worldwide download via the CC Desktop App… This means everyone gets either a free upgrade or a free trial – but some folks would like or need to access the new tools directly without using Adobe’s download manager.

Most people download these trials by signing up for the free level of CC membership and using the Creative Cloud Desktop app to select and download any or all of these products, although here on this page no membership is required to access the trials. In other words, with these direct links you can try out any of the just-launched CC 2014 apps without the Creative Cloud.