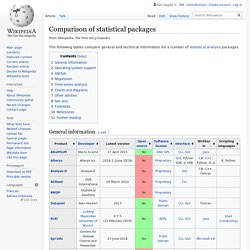 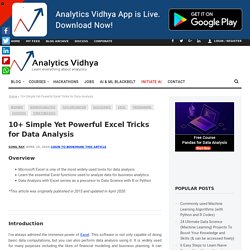 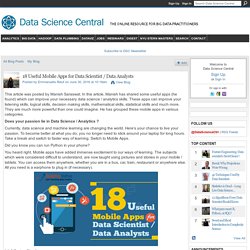 Free Alternatives to Excel for Data Cleaning. Pretty much every data rookie starts with Excel. 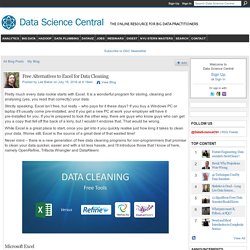 It is a wonderful program for storing, cleaning and analysing (yes, you read that correctly) your data. Strictly speaking, Excel isn’t free, but really – who pays for it these days? If you buy a Windows PC or laptop it’ll usually come pre-installed, and if you get a new PC at work your employer will have it pre-installed for you. If you’re prepared to look the other way, there are guys who know guys who can get you a copy that fell off the back of a lorry, but I wouldn’t endorse that.

That would be wrong. Advanced Analytic Platforms – Incumbents Fall – Challengers Rise. Summary: The Gartner Magic Quadrant for Data Science and Machine Learning Platforms is just out and once again there are big changes in the leaderboard. 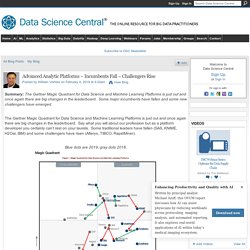 Some major incumbents have fallen and some new challengers have emerged. The Gartner Magic Quadrant for Data Science and Machine Learning Platforms is just out and once again there are big changes in the leaderboard. Say what you will about our profession but as a platform developer you certainly can’t rest on your laurels. 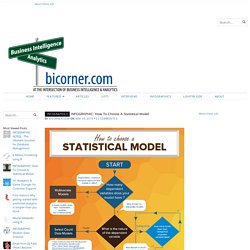 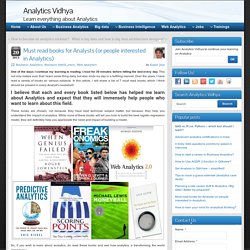 I read for 30 minutes before hitting the bed every day. This not only makes sure that I learn some thing daily, but also ends my day in a fulfilling manner. Over the years, I have read a variety of books on various subjects. In this article, I will share a list of 7 must read books, which I think should be present in every Analyst’s bookshelf. I believe that each and every book listed below has helped me learn about Analytics and expect that they will immensely help people who want to learn about this field.

These books are chosen, not because they have best technical subject matter, but because they help you understand the impact of analytics. Tableau Software Expands Big Data Capabilities; Launches Japanese Version. Tableau Software, the global leader in rapid-fire business intelligence (BI) software, today announced direct access to the MapR Distribution for Apache Hadoop for big data analytics. 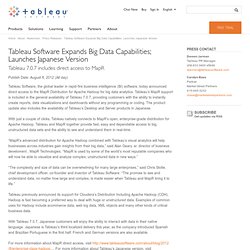 Tableau’s MapR support is included in the general availability of Tableau 7.0.7, providing customers with the ability to instantly create reports, data visualizations and dashboards without any programming or coding. The product update also includes the availability of Tableau’s Desktop and Server products in Japanese. With just a couple of clicks, Tableau natively connects to MapR’s open, enterprise-grade distribution for Apache Hadoop. 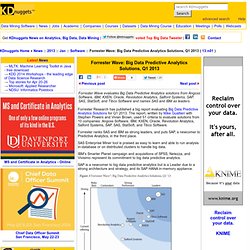 SAS Enterprise Miner tool is praised as easy to learn and able to run analysis in-database or on distributed clusters to handle big data. Ayasdi: Stanford Math Begets a Data Company. Like most of his peers, Gunnar Carlsson spends his time thinking about hairy, theoretical math problems. 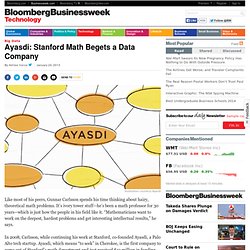 It’s ivory tower stuff—he’s been a math professor for 30 years—which is just how the people in his field like it. “Mathematicians want to work on the deepest, hardest problems and get interesting intellectual results,” he says. In 2008, Carlsson, while continuing his work at Stanford, co-founded Ayasdi, a Palo Alto tech startup. Ayasdi, which means “to seek” in Cherokee, is the first company to come out of Stanford’s math department and just received $10 million in funding from Khosla Ventures and Floodgate. The company builds software that takes a complex branch of mathematics known as topology, the study of how shapes interact with space, and applies it to large volumes of data.

Bi_tool_evaluation%20V4_jp3. 10 most popular analytic tools in business. Business analytics is a fast growing field and there are many tools available in the market to serve the needs of organizations. The range of analytical software goes from relatively simple statistical tools in spreadsheets (ex-MS Excel) to statistical software packages (ex-KXEN, Statistica) to sophisticated business intelligence suites (ex-SAS, Oracle, SAP, IBM among the big players). Open source tools like R and Weka are also gaining popularity. Besides these, companies develop in-house tools designed for specific purposes. Here is a list of 10 most popular analytic tools used in the business world. Commercial software MS Excel: Almost every business user has access to MS Office suite and Excel. While most people are aware of its excellent reporting and graphing abilities, excel can be a powerful analytic tool in the hands of an experienced user. 10 Business Intelligence Trends for 2012.

Software in Analytics – the Changing Game. We have discussed in an earlier post how the explosion of data (especially in terms of new variables) is leading to a huge requirement of Analytics professionals who can work on data mining and Visualisation / dash boarding. They say that a picture says more than a 1000 words. And the world of Analytics surely seems to be following this. We know that there are a large number of SaaS (software as a service) today which make all aspects of analytics much easier to execute than ever before. As the plethora of giants in this sphere increase in size ( SAS, SPSSS etc.) by acquiring smaller firms which compete in the BI space, so do the number of smaller players. Two relatively smaller players that seem to be making an impact in the Indian Analytics space are Omniscope and Tabuleau. (Note :-In this space SAS has its ‘ web reporting studio’ and Qlick view is an established player .)