Archiveofourown. Safe. Tooth and nail. The end of this chapter. Show Chapter. Despite Adversity. Trimmed & Burning - achycarnations - Sherlock. I. 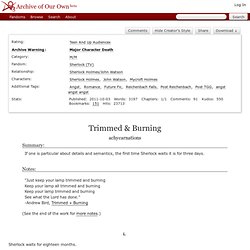 Sherlock waits for eighteen months. He wakes up in a room where everything is off-white and sterile and is so achy and nauseated that he is convinced for a swirling instant that he's overdosed again. As suddenly he is sledgehammered with memories of a bright flash, a sickening scream of twisting steel and crumbling concrete, of the hard slams in blinding fast sequence of a body to his left side and of water to his right.

Of a desperate breath gasped that draws water that burns with chlorine. His nausea flares unbearably and he barely manages to throw himself onto an elbow (wrist sprained, shoulder wrenched from socket) so the bile he chokes out mostly ends up on the (off-white) linoleum. The nurse who appears is saying a lot to him, asking him a lot of questions, touching cold hands to the parts of him that are bandaged and sear with hot pain, but all he can say back is "John, John, John. " But, after that, Sherlock waits for eighteen months. Trust him: He knows about explosions. "Why? " ii. Show Chapter. The Contingency Plan - mightypog - Sherlock.

"Absolutely not," said Sherlock, as Lestrade knew he would, but Lestrade had a queasy feeling Sherlock was not going to get his way. 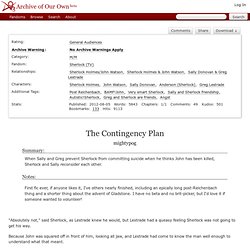 Because John was squared off in front of him, looking all jaw, and Lestrade had come to know the man well enough to understand what that meant. Lestrade shifted foot to foot; he'd been standing on the pavement for hours now, staring up at the windows above an unassuming pawn shop, where in a second floor flat a military veteran was holding his children, 10 and 8, hostage.

In the hours since he had been cornered there, he'd been working on the construction of a bomb. It was Sherlock who had treed him here. The veteran hadn't planned to get caught. Lestrade hadn't even considered that the murders might be related. But Sherlock had appeared like the ice-eyed angel of death in Lestrade's office the day after the third murder, holding three newspapers, and told Lestrade he had a serial killer on his hands, then made it look ridiculously obvious. "Absolutely not. " Nocturne in Tempo Rubato - Chapter 7 - Nikoshinigami - Sherlock. Chapter Text The hardest part about saying ‘no’ was knowing Sherlock would forgive him for it. 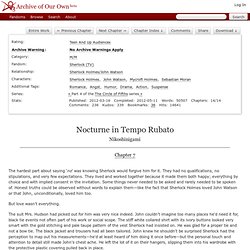 They had no qualifications, no stipulations, and very few expectations. Trying to find the in between. A world upended. Always by Sirbestonen on deviantART. Held In Trust. Let's make a Bed out in the rain. Main Content <p id="javascript-warning"> While we&#x27;ve done our best to make the core functionality of this site accessible without javascript, it will work better with it enabled. 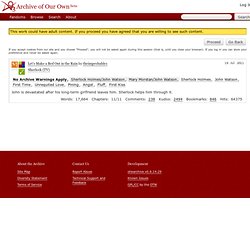 Please consider turning it on! </p> Archive of Our Own beta Log In Site Navigation This work could have adult content. If you accept cookies from our site and you choose "Proceed", you will not be asked again during this session (that is, until you close your browser). Footer Close. Lucid. We Go Anywhere But To The Ground, a sherlock fanfic. This fic is a monster. 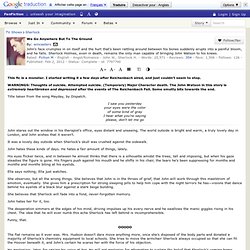 I started writing it a few days after Reichenbach aired, and just couldn't seem to stop. WARNINGS: Thoughts of suicide. Attempted suicide. (Temporary) Major Character death. The John Watson in this story is extremely heartbroken and depressed after the events of The Reichenbach Fall. Title taken from the song Mayday, by Dispatch. I saw you yesterdayyour eyes were the colorof some kind of grayI hear what you're sayingplease, don't let me go John stares out the window in his therapist's office, eyes distant and unseeing.

It was a lovely day outside when Sherlock's skull was crushed against the sidewalk. John hates these kinds of days. His eyes flicker twice, and in between he almost thinks that there is a silhouette amidst the trees, tall and imposing, but when his gaze steadies the figure is gone. Ella says nothing; Ella just watches. She observes, but all the wrong things. Given in Evidence. The Blind Leading The Blind... - Semper Fidelis, Epilogue.