Making a move (LIVEJOURNAL) Fandom: Sherlock (bbc).Word count: 3076Pairing/s: John Watson / Sherlock Holmes Summary: It was embarrassing, having to go to Mycroft of all people for advice in this matter. 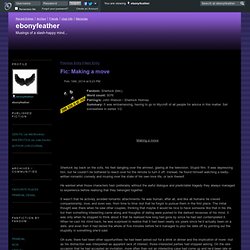 Set somewhere in series 1/2. Making a move Sherlock lay back on the sofa, his feet dangling over the armrest, glaring at the television. Stupid film. It was depressing him, but he couldn’t be bothered to reach over for the remote to turn it off. He wanted what those characters had- preferably without the awful dialogue and predictable tragedy they always managed to experience before realising that they belonged together. Obvious; Or, Greg Lestrade Is Good At Detecting And Has Five Pounds To One That Sherlock And John Will Shag - the_arc5 - Sherlock (BBC)

No matter what Sherlock says, Greg earned his job, and he doesn’t keep it by doing shoddy work. 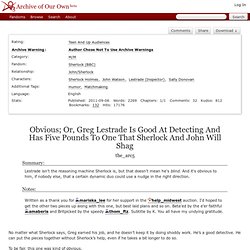 He’s a good detective. He can put the pieces together without Sherlock’s help, even if he takes a bit longer to do so. To be fair, this one was kind of obvious. They’re both on their third and the match can only go one way from here when Greg finally finds enough internal fortitude to bring it up. “So,” he says, swirling his half-full pint and wondering if he shouldn’t just get another now. “Yeah,” John says, and takes a drink. You're Worth the Sacrifice, a sherlock fanfic. John stirred into consciousness, his head a right mess of drugs, sleep and pain. 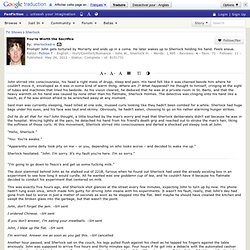 Just the two of us. We Call Them Miracles - TheUniverseWillSing - Sherlock (TV), Sherlock Holmes & Related Fandoms. When John called from the base to tell him that leave had not been granted for the holidays, Sherlock understood. 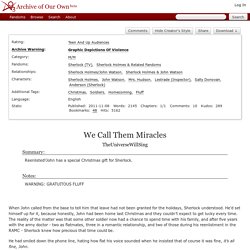 He’d set himself up for it, because honestly, John had been home last Christmas and they couldn’t expect to get lucky every time. The reality of the matter was that some other soldier now had a chance to spend time with his family, and after five years with the army doctor - two as flatmates, three in a romantic relationship, and two of those during his reenlistment in the RAMC - Sherlock knew how precious that time could be. He had smiled down the phone line, hating how flat his voice sounded when he insisted that of course it was fine, it’s all fine, John. And it was fine. John was safe, Mycroft was in India with his wife’s parents, and there was a particularly elusive serial killer on the lam. Although, Christmas was their favorite holiday together. Carry On - Mazarin221b - Sherlock. Out enthusiasms which cannot always be explained. BBC Sherlock Fanart-Chibi Comic by xxxxxx6x on deviantART. 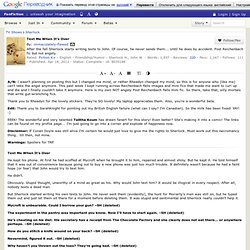 This past week I kept running across Reichenbach Falls images and mini fics that made me want to curl up and die and I finally couldn't take it anymore. Here is my own NOT angsty Post Reichenbach Falls mini fic. So there, take that, silly mortals that write gut-wrenching fics. Thank you to Rheadyn for the lovely stickers. They're SO lovely! Edit: Thank you to SarahKnight for pointing out my British English failure (what can I say? EEEK! Disclaimer: If Conan Doyle was still alive I'm certain he would just love to give me the rights to Sherlock. Warnings: Spoilers for TRF.

-Johnlock- Let's have a baby! by Hyper-Baka-Girl on deviantART. Four Times John Didn't Propose, and One Time Sherlock Did - jessaverant - Sherlock. When he first became suspect, he wanted to laugh at himself for the absurdity. 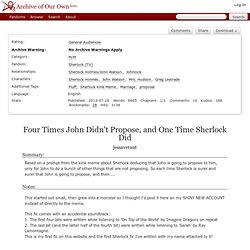 He, Sherlock Holmes, married? It was almost as funny as the idea of Mycroft standing up and walking someplace. No, no, he was better off without it, of course. There was no actual indication of marriage, ever. While I'm Away. Title: While I'm AwayPairing: Sherlock/JohnRating: ExplicitGenre: humor, fluff Summary: Sherlock is upset when John signs up for a month-long medical class at the University of Edinburgh Medical School. 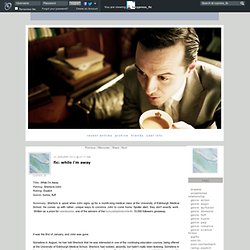 He comes up with rather...unique ways to convince John to come home. Spoiler alert: they don't exactly work. Written as a prize for newdisaster, one of the winners of the fuckyeahjohnlockfanfic 10,000 followers giveaway. Cute. Sher and john go to germany. sher finally realizes with john's help, his feelings. lots of blushing. Title: Five Times Sherlock Had Coffee... and one time he had John insteadPairing: Sherlock / JohnCategory: RomanceRating: PG-13Beta: The marvellous arianedevereSummary: Overseas on a case with his blogger and friend, Sherlock finds that thoughts which are easily suppressed amid the distractions of London are becoming increasingly difficult to ignore... 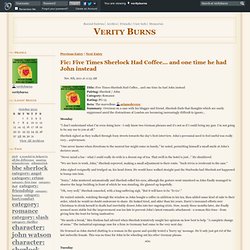 Monday "I don't understand what I'm even doing here - I only know two German phrases and it's not as if I could bring my gun. I'm not going to be any use to you at all. " Sherlock sighed as they walked through busy streets towards the day's first interview. Chow Mein, Deductions and Realisations, a sherlock fanfic. Title: Chow Mein, Deductions and Realisations Author: starjenni Disclaimer: Are not, and never will be, mine. 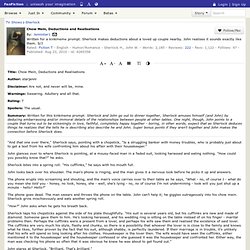 Warnings: Swearing. Adultery and all that. The Birds and the Bees Chapter 6, a sherlock fanfic. Exception John and Sherlock hadn't seen Hamish for close to two days. 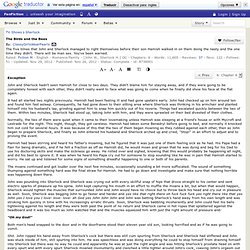 They didn't blame him for staying away, and if they were going to be completely honest with each other, they didn't really want to face what was going to come when he finally did show his face at the flat again. It had all started two nights previously. Hamish had been feeling ill and had gone upstairs early. John had checked up on him around ten and found him fast asleep. Normally, the two of them were quiet when it came to their lovemaking unless Hamish was sleeping at a friend's house or with Mycroft and Lestrade for the night. Dirty Fighting - SailorChibi - Sherlock (TV), Sherlock Holmes & Related Fandoms. John knows that he will never get tired of watching Sherlock Holmes, particularly when the man is in the middle of one of his deductions.

Sherlock is all grace in those moments, hands flying as he gesticulates wildly as though no one around him will be able to understand unless he sketches it out, dark curls falling in his eyes because he needs a haircut but keeps putting it off for the sake of cases. John Was Nice Like That - hannah_baker - Sherlock. Sherlock Holmes was not a man capable of taking a nap. Sleep at night was enough of a waste of time, he didn’t have to waste his day as well. But, oh, John Watson loved a good kip on the couch.

And Sherlock liked a happy John, which was why he found himself reclining in the sitting room of 221B with a sleeping doctor sprawled on top of him. This was acceptable. The infinite number of times Sherlock kisses John, a sherlock fanfic. Disclaimer: BBC Sherlock belongs to Mark Gatiss and Steven Moffat and originally to Sir Arthur Conan Doyle. Ignite your bones. Greg hears a butt dial. proposal. Cute. Additional Information Chapter 4, a sherlock fanfic. The staff at the morgue were used to seeing him by now and Molly let him in without question. She gave him a quizzical glance at what must have been the angry expression on his face but he ignored it.

He had no desire to explain the details of his personal life to her, especially not where it involved Sherlock. He knew she still had a crush on his husband, although right now, John was ready to tell her that she could have him with his blessings.