The 5 Best National Parks in the World  Breakdown.gif (GIF Image, 681 × 976 pixels) 2016 is Named the Year of Adventure in Wales. From sky to sea there’s a journey waiting in Wales; that’s why the Welsh Government has named 2016 the country’s Year of Adventure. 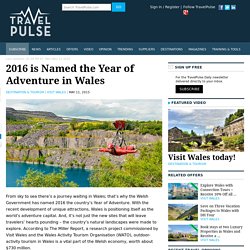 With the recent development of unique attractions, Wales is positioning itself as the world’s adventure capital. And, it’s not just the new sites that will leave travelers’ hearts pounding – the country’s natural landscapes were made to explore. According to The Miller Report, a research project commissioned by Visit Wales and the Wales Activity Tourism Organisation (WATO), outdoor-activity tourism in Wales is a vital part of the Welsh economy, worth about $730 million. Ken Skates, the Deputy Minister for Culture, Sport and Tourism in Wales says of the announcement, “This launch signals a huge ambition to promote Wales as the home of adventure in 2016.” He added, “For the year of adventure in 2016 we’re going to work with partners to make sure that anyone who wants to can experience adventure in our fantastic landscapes and environment.”

Types of Watersports Activities on the Coast of Wales, UK. Coasteering fun Coasteering is the ultimate coastal adventure. 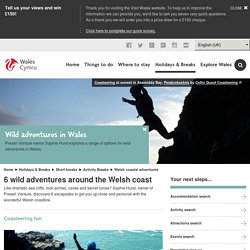 You find yourself kitted up in a wetsuit, flotation jacket and helmet as you traverse the rocky coastline at sea level, getting up close and personal with the flora and fauna and maybe even spotting a grey seal or two.You’ll experience such delights such as swimming through rock gullies into sea caves, being swooshed around by waves, scrambling and climbing across rocks and flinging yourself from vertical rock faces!

Go immerse yourself in true communion with Mother Nature! Visit Pembrokeshire. The best location is the Wick; a sheer cliff carved with ledges that are ideally suited to nesting seabirds and easily viewed from the opposite cliff. 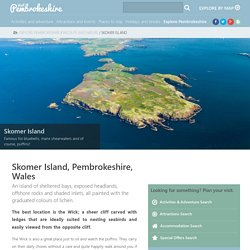 The Wick is also a great place just to sit and watch the puffins. They carry on their daily chores without a care and quite happily walk around you if you’re in the way! You won’t need your binoculars but a camera is a must. In the centre of the island is the ruined farm. An education room and interpretation centre can be found here as well as accommodation space for up to 16 people in two twin rooms, one triple room, one family room (sleeping four) and a five bed room. If you stay overnight, you can witness one of the most remarkable natural events in the UK, the manx shearwaters returning to their burrows under the cover of darkness. Spring on Skomer Island is colourful affair with bluebells and pink campion carpeting most of the island. How to get there: There is a maximum daily quota for landing visitors. 7 Memorable things to do for free.

Walk the second best coastline in the world, that’s right, the world. 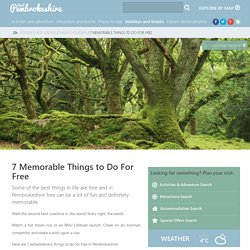 Watch a full moon rise or an RNLI Lifeboat launch. Cheer on an Ironman competitor and make a wish upon a star. Here are 7 extraordinary things to do for free in Pembrokeshire: 1. Discover a Beach If you do only one thing this holiday then make sure you go to a beach… or two. British holidays for food-lovers. 1. 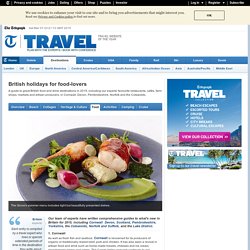 Cornwall As well as fresh fish and seafood, Cornwall is renowned for its producers of organic or traditionally reared beef, pork and chicken. It has also seen a revival in artisan food and drink such as home-made breads, cheeses and ice cream, microbrewery beers and ciders. The Camel Valley vineyard continues to win international awards for its sparkling wines (01208 77959; camelvalley.com). The best places to find fresh produce are at roadside farm shops including Trevelyan Farm on the A394 near Marazion (01736 710410), Lobbs at Heligan Gardens (01726 844411; lobbsfarmshop.com), Gear Farm at St Martin on the Helford River (01326 221150; gearfarmorganicpasties.co.uk), Padstow Farm Shop (01841 533060; padstowfarmshop.co.uk), Trevaskis Farm near Hayle (01209 713931; trevaskisfarm.co.uk) and Trevilley Farm near Newquay (01637 872 310; trevilleyfarm.com). The Rock Oyster Festival this year takes place at Dinham House overlooking the Camel estuary on July 11-13. 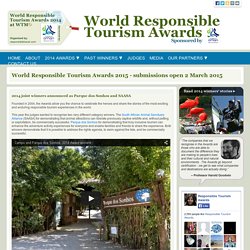 National Coasteering Charter » Organisation for the provision and regulation of coasteering within the UK. 10 best wildlife-watching experiences: From hen harriers to porpoises - News & Advice - Travel - The Independent. At this point I realised I hadn’t even reached journey’s end. 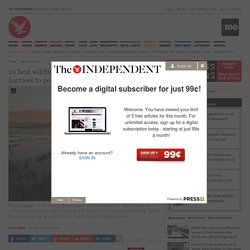 There was still the matter of a mile’s walk along sunken paths, brushing brambles and squelching puddles. The moon illuminated still ponds that I would otherwise never have suspected of being close by. Then, a short climb up a handful of steps and I stepped on to an embankment that looked out on The Wash, the extraordinary expanse of water that surges and recedes along the coast where Norfolk and Lincolnshire collide. The faintest dab of colour lit the sky, and though it was too dark to see anything other than silhouettes, the show began. Just four of them to start with. Loading gallery. 20 reasons you should move to Wales immediately. 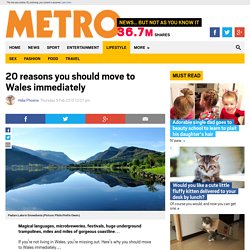 Here’s why you should move to Wales immediately… 1.