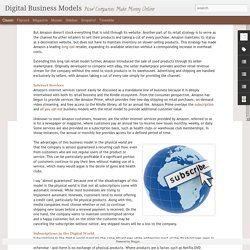 What is Selling Online? These days, there are very few people who have not had some form of online buying experience as consumers. 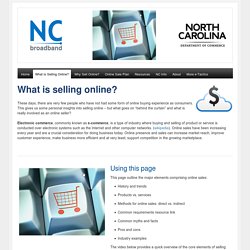 This gives us some personal insights into selling online – but what goes on “behind the curtain” and what is really involved as an online seller? Electronic commerce, commonly known as e-commerce, is a type of industry where buying and selling of product or service is conducted over electronic systems such as the Internet and other computer networks. (wikipedia). What is Selling Online? Ticketmaster.co.uk - Affiliates. StubHub - Wikipedia. StubHub is an online ticket exchange owned by eBay, which provides services for buyers and sellers of tickets for sports, concerts, theater and other live entertainment events. 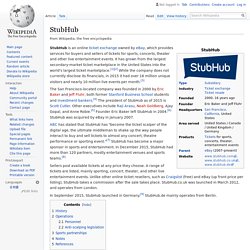 It has grown from the largest secondary-market ticket marketplace in the United States into the world's largest ticket marketplace.[1][2] While the company does not currently disclose its financials, in 2015 it had over 16 million unique visitors and nearly 10 million live events per month.[3] ABC has stated that StubHub has "become the ticket scalper of the digital age, the ultimate middleman to shake up the way people interact to buy and sell tickets to almost any concert, theatre performance or sporting event. Viagogo - Wikipedia. Viagogo is an online ticket marketplace for buying and selling tickets to live events.[1] It is particularly known for 'callous resale profiteering' from the resale of tickets for charity events. 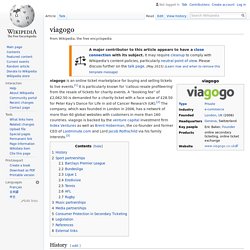 A “booking fee” of £2,062.50 is demanded for a charity ticket with a face value of £28.50 for Peter Kay’s Dance for Life in aid of Cancer Research (UK).[2] The company, which was founded in London in 2006, has a network of more than 60 global websites with customers in more than 160 countries. viagogo is backed by the venture capital investment firm Index Ventures as well as Brent Hoberman, the co-founder and former CEO of Lastminute.com and Lord Jacob Rothschild via his family interests.[3] History[edit] 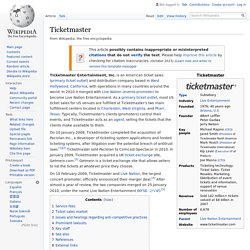 In January 2009, Ticketmaster acquired a UK ticket exchange site, Getmein.com.[3] Getmein is a ticket exchange site that allows sellers to list the tickets at whatever price they choose. On 10 February 2009, Ticketmaster and Live Nation, the largest concert promoter, officially announced their merger deal.[4] After almost a year of review, the two companies merged on 25 January 2010, under the name Live Nation Entertainment (NYSE: LYV).[5] Service fees[edit] Typical fees added to a ticket's face value include: Live Nation Entertainment - Wikipedia. The merger that gave rise to the company was not without opposition. 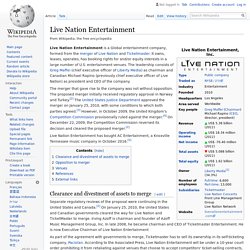 The proposed merger initially received regulatory approval in Norway and Turkey.[2] The United States Justice Department approved the merger on January 25, 2010, with some conditions to which both parties agreed.[3] However, in October 2009, the United Kingdom's Competition Commission provisionally ruled against the merger.[4] On December 22, 2009, the Competition Commission reversed its decision and cleared the proposed merger.[2] Live Nation Entertainment has bought AC Entertainment, a Knoxville Tennessee music company in October 2016.[5] Clearance and divestment of assets to merge[edit] Separate regulatory reviews of the proposal were continuing in the United States and Canada.[2] On January 25, 2010, the United States and Canadian governments cleared the way for Live Nation and TicketMaster to merge. 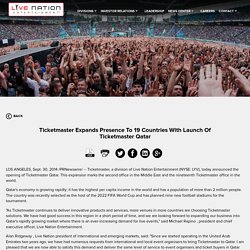 This expansion marks the second office in the and the nineteenth Ticketmaster office in the world. economy is growing rapidly; it has the highest per capita income in the world and has a population of more than 2 million people. The country was recently selected as the host of the 2022 FIFA World Cup and has planned nine new football stadiums for the tournament. The Ticketmaster business model - why don't the venues seek to capture those profits? : Economics. Ticketmaster facts, information, pictures. 8800 Sunset BoulevardLos Angeles, California 90069U.S.A.Telephone: (213) 639-6100Fax: (213) 386-1244Web site: Wholly Owned Subsidiary of IAC/Interactive CorporationIncorporated: 1982Employees: NASales: $743 million (2003)NAIC: 561599 All Other Travel Arrangement and Reservation Services Ticketmaster is the world's largest ticket distribution company in the United States, completely dominating its market niche. 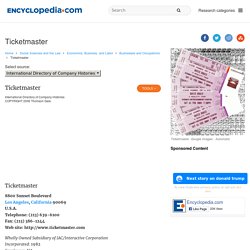 The company distributes tickets for more than 10,000 clients whose events range from professional wrestling matches and rock concerts to Broadway shows and operas. Tickets are sold at roughly 3,300 outlets worldwide, as well as through 19 telephone call centers and through the ticketmaster.com web site. What is Ticketmaster business model? - Quora. Ticket Sales Business Models - The Retailer, The Marketplace, The "Enabler" Platform - Netonomy.NET. Event ticket sales is no joke. 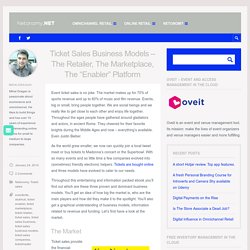 The market makes up for 70% of sports revenue and up to 60% of music and film revenue. Events, big or small, bring people together. What is a sale? definition and meaning - BusinessDictionary.com. Sale Definition. How Economies Depend on Sales Share Video undefined What is a 'Sale' A sale is a transaction between two parties where the buyer receives goods (tangible or intangible), services and/or assets in exchange for money. 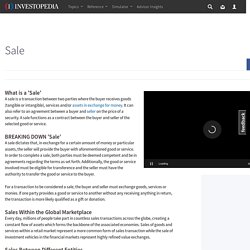 It can also refer to an agreement between a buyer and seller on the price of a security. What is e-commerce (electronic commerce or EC)? - Definition from WhatIs.com. E-commerce (electronic commerce or EC) is the buying and selling of goods and services, or the transmitting of funds or data, over an electronic network, primarily the internet. These business transactions occur either as business-to-business, business-to-consumer, consumer-to-consumer or consumer-to-business. The terms e-commerce and e-business are often used interchangeably. The term e-tail is also sometimes used in reference to transactional processes for online shopping. By submitting your personal information, you agree that TechTarget and its partners may contact you regarding relevant content, products and special offers. You also agree that your personal information may be transferred and processed in the United States, and that you have read and agree to the Terms of Use and the Privacy Policy. 12 Ways to Increase Online Sales.

One of the core values at my company is "Test everything; assume nothing! " That's because we know that after all these years on the internet, you just never know what strategy or angle is going to work best for you...until you test it. This applies even to your star-performing strategies, because there's always room for improvement. The bottom line is, testing is the only way to discover what works--and what doesn't--on your website, and it's the best way to start increasing your sales exponentially.

And if you take the plunge and use just one of the following tests, you'll learn just how true this is, especially when you start seeing a dramatic improvement to your bottom line. Test #1: Offer just one product or service on your home page. Uk.businessinsider. Shidler college of business ws. Amazon.com case study. Amazon's business strategy and revenue model: A history and 2014 update collI've used Amazon as a case study in my books for over 10 years now since I think all types of businesses can learn from their digital business strategy. From startups and small businesses to large international businesses, their focus on the customer, testing market opportunities made available by digital technology and their focus on testing and analysis to improve results.

I aim to keep this case study up-to-date for readers of the books and Smart Insights readers who may be interested. In it we look at Amazon's background, revenue model and sources for the latest business results. We can also learn from their approach to digital marketing since they use digital marketing efficiently across all customer communications touchpoints in our RACE marketing planning framework: Amazon accounted for 60% of U.S. online sales growth in 2015. Amazon.com Inc. generated about 60% of total U.S. online sales growth in 2015 far outpacing the competition, according to data compiled by Forrester Research. The retail giant tallied $23 billion more in U.S. e-commerce sales in 2015 than 2014, the report found.

“Amazon makes up a larger percentage of e-commerce in the U.S. than any other player, and its retail growth has outpaced overall online retail,” Forrester Research wrote in a recent report, titled “U.S. Amazon Business Model ... 7 Surprising Things to Know. How Amazon Adapted Its Business Model to India. When Amazon decided to enter the Indian e-commerce market, it was clear from the outset that something would have to give. That something was the very business model that had made Amazon an internet powerhouse in the U.S. Amazon.com debuted as an online bookstore in 1994. Founder Jeff Bezos’s initial business model was fairly simple: Source a single product type from wholesalers and publishers and sell it directly to consumers on the then fledgling internet. Statistics and Facts about Amazon. Analysis of the Amazon Business Model.