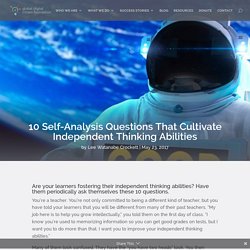 Have them periodically ask themselves these 10 questions. All About Escape Rooms. Components from Brian Mayer and Liesl Toates’s River Valley Civilization Escape game, created for the classroom. 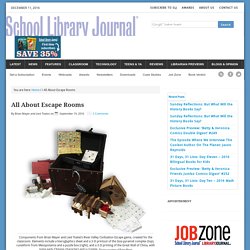 Elements include a hieroglyphics sheet and a 3-D printout of the Giza pyramid complex (top), cuneiform from Mesopotamia and a puzzle box (right), and a 3-D printing of the Great Wall of China, with some early Chinese characters and a cryptex. Photos courtesy of Brian Mayer You awaken in an underwater bunker, unaware of who you are or why you’re there. The only clue is an ID card near your bed. The roof begins to leak, and several people are with you. Sounds exciting, doesn’t it? In Dr. Our games combine virtual clues and physical clues in the library or classroom space.

This game also involves math. Playing River Valley Civilization Escape in Minecraft. Anatomy of a room Escape rooms take the challenge and social engagement of tabletop games and expand that experience to make the real world a part of the game. Science! 37 Books With Plot Twists That Will Blow Your Mind. Building Students' Cognitive Flexibility. In today's world, the skillsets of cognitive flexibility are more critical and valuable than ever before. 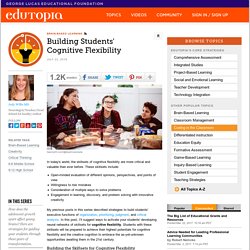 These skillsets include: Open-minded evaluation of different opinions, perspectives, and points of viewWillingness to risk mistakesConsideration of multiple ways to solve problemsEngagement in learning, discovery, and problem solving with innovative creativity My previous posts in this series described strategies to build students' executive functions of organization, prioritizing, judgment, and critical analysis. In this post, I’ll suggest ways to activate your students' developing neural networks of skillsets for cognitive flexibility.

Students with these skillsets will be prepared to achieve their highest potentials for cognitive flexibility and the creative cognition to embrace the as-yet-unknown opportunities awaiting them in the 21st century. Building the Skillsets for Cognitive Flexibility. How To Ensure Students Are Actively Engaged and Not Just Compliant. Engagement is a crucial part of learning, but ensuring students are actively engaged is more complex than whether a student is paying attention or not. 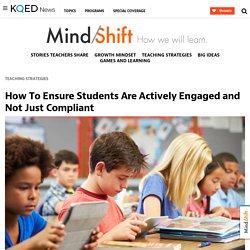 As technology has made its way into the classroom many educators describe how attentive students are when on devices, but a quiet, outwardly behaved student is not the same thing as one that is truly engaged. The kind of engagement that leads to learning is three dimensional. Too often educators look at engagement as a “yes or no” question: students are either engaged or they’re not. “That is absolutely not an appropriate way to view it,” said John Almarode, associate professor at James Madison University and co-director of the school’s Center for STEM Education and Outreach. How to Bring Playfulness to High School Students.

It’s easy to focus on academics and college transcripts when children become tweens and teens, but retaining the agency and creativity inherent in play is crucial for them, too. 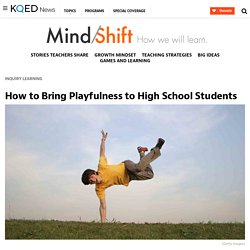 But what is the high school equivalent for the kind of inquisitive learning that happens when little kids play in the sandbox, finger-paint, build with blocks or play make-believe? “When your 4-year-old is dipping his hand in the rice table, he’s learning really important things about tactile touch,” said Denise Pope, senior lecturer at Stanford’s Graduate School of Education and co-founder of Challenge Success. “Older kids need those same tactile, hands-on experiences to learn as well.”

Teenagers need creative outlets, just like elementary school children. Those experiences helps open their brains in different ways, gets them excited about learning and allows them to have fun. There are several ways to encourage teenagers to learn playfully. Free Choice Time: Student-Directed Learning Play Resources. What Makes an ‘Extreme Learner’? When Mollie Cueva-Dabkoski was dissecting a sheep’s heart during an eighth-grade science class, she had an epiphany that changed her life. 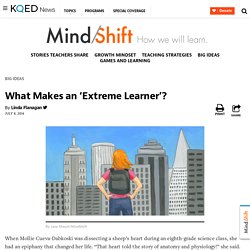 “That heart told the story of anatomy and physiology!” She said. A Neuroscientist Explains Adult Coloring Books. A few months ago, I caved: I bought myself a coloring book. 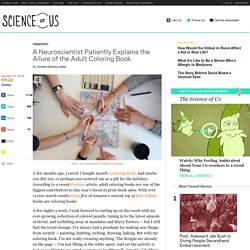 And maybe you did, too, or perhaps you received one as a gift for the holidays. According to a recent Fortune article, adult coloring books are one of the biggest contributors to this year’s boost in print-book sales. With over 11,000 search results total, five of Amazon’s current top 15 best-selling books are coloring books. A few nights a week, I look forward to curling up on the couch with my ever-growing collection of colored pencils, tuning in to the latest episode of Serial, and scribbling away at mandalas and Harry Potters — but I still find the trend strange. How Digital Games Help Teachers Make Connections to Lessons and Students. It’s not unusual for educators to use analog games in the classroom, but as more classrooms gain access to technology, digital games are also making a strong showing. 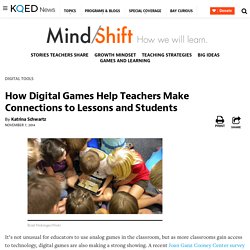 A recent Joan Ganz Cooney Center survey of 694 K-8 teachers found that 74 percent of those surveyed use digital games in the classroom, up from 50 percent two years ago. Many of the teachers finding the most success are good at creatively connecting the game back to the curriculum, while allowing it to maintain the qualities of a good game. These teachers are often more comfortable with games themselves, playing for fun in their spare time, and are thus more likely to see valuable classroom connections. What Do We Really Mean When We Say ‘Personalized Learning’? The idea of personalized learning is seductive – it implies moving away from the industrialized form of education that pumps out cookie-cutter students with the same knowledge and skills. 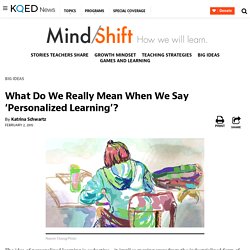 After decades of this approach, it is clear that all children don’t learn the same way and personalization seems to honor those differences. However, that term has taken on several different meanings. “When you say personalization, what do you mean by that?” Asked Diana Laufenberg, director of Inquiry Schools and a former teacher at Science Leadership Academy in Philadelphia. “It’s not a word that always means the same thing.” Personalization is often used in the ed-tech community to describe a student moving through a prescribed set of activities at his own pace. The Neuroscience Behind Stress and Learning. The realities of standardized tests and increasingly structured, if not synchronized, curriculum continue to build classroom stress levels. 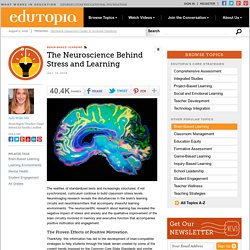 Neuroimaging research reveals the disturbances in the brain's learning circuits and neurotransmitters that accompany stressful learning environments. The neuroscientific research about learning has revealed the negative impact of stress and anxiety and the qualitative improvement of the brain circuitry involved in memory and executive function that accompanies positive motivation and engagement.

A while back, I was asked, "What engages students? " Sure, I could respond, sharing anecdotes about what I believed to be engaging, but I thought it would be so much better to lob that question to my own eighth graders.