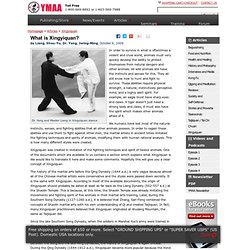 All wild animals still have the instincts and senses for this. They all still know how to hunt and fight to survive. These abilities require physical strength, a natural, instinctively perceptive mind, and a highly alert spirit. For example, an eagle must have sharp eyes and claws. A tiger doesn’t just need a strong body and claws, it must also have the spirit which makes other animals afraid of it.

We humans have lost most of the natural instincts, senses, and fighting abilities that all other animals possess. Fundamental Moving Patterns of Xingyiquan. We will begin this discussion by introducing the most basic stationary posture of Xingyiquan, the three body posture (San Ti Shi). 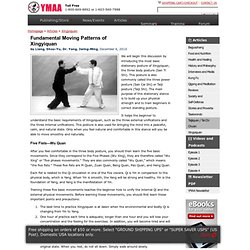 This posture is also commonly called the three power posture (San Cai Shi) or Taiji posture (Taiji Shi). The main purpose of this stationary stance is to build up your physical strength and to train beginners in correct standing posture. It helps the beginner to understand the basic requirements of Xingyiquan, such as the three external unifications and the three internal unifications. This posture is also used for bringing the mind into a peaceful, calm, and natural state. Only when you feel natural and comfortable in this stance will you be able to move smoothly and naturally.

Five Fists—Wu Quan After you feel comfortable in the three body posture, you should then learn the five basic movements. Xingyquan at Gerald Sharp's ChiFlow.com. An Overview of Hsing I Chuan (Xingyiquan) - page 1 by Gerald A. 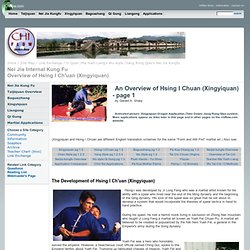 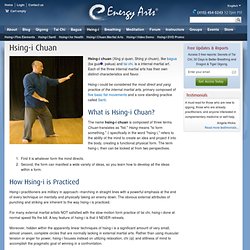 Each of the three internal martial arts has their own distinct characteristics and flavor. Hsing-i could be considered the most direct and yang practice of the internal martial arts, primary composed of five basic fist movements and a core standing practice called Santi. The name hsing-i chuan is composed of three terms. Chuan translates as "fist. " First it is whatever form the mind directs. Hsing-i practitioners are military in approach--marching in straight lines with a powerful emphasis at the end of every technique on mentally and physically taking an enemy down. 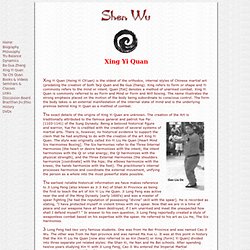 Xing refers to form or shape and Yi commonly refers to the mind or intent. Quan [fist] denotes a method of unarmed combat. Xing Yi Quan is commonly referred to as Form and Mind or Form and Will boxing. The name illustrates the strong emphasis placed on the motion of the body being subordinate to conscious control. The exact details of the origins of Xing Yi Quan are unknown. Traditionally attributed to the famous general and patriot Yue Fei (1103-1141) of the Sung Dynasty. The earliest reliable historical information we have makes reference to Ji Long Feng (also known as Ji Ji Ke) of Shan Xi Province as being the first to teach the art of Xin Yi Liu He Quan. Ji Long Feng had two very famous students. Two of Li's most famous Shan Xi students were Sung Shi pong and Che Ti Zhai.

Liquid Lightning：The Meaning of Internal in Xingyiquan - BUDOJAPAN. The internal martial arts of China are designed to cultivate the qi energy, so that the inner power becomes invincible. 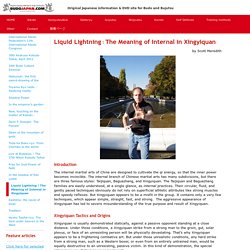 The internal branch of Chinese martial arts has many subdivisions, but there are three famous styles: Taijiquan, Baguazhang, and Xingyiquan. The Taijiquan and Baguazhang families are easily understood, at a single glance, as internal practices. Their circular, fluid, and gently paced techniques obviously do not rely on superficial athletic attributes like strong muscles and speedy reflexes. But Xingyiquan appears to be a misfit in the group. It contains only a very few techniques, which appear simple, straight, fast, and strong.

Xingyiquan is usually demonstrated statically, against a passive opponent standing at a close distance.