About Taijiquan - Welcome To Peter's Taijiquan Home Page. Welcome to my home page. 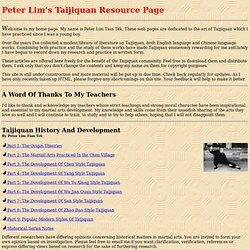 My name is Peter Lim Tian Tek. These web pages are dedicated to the art of Taijiquan which I have practiced since I was a young boy. Over the years I've collected a modest library of literature on Taijiquan, both English language and Chinese language works. Combining both practice and the study of these works have made Taijiquan emmensely rewarding for me and lately I have begun to record down my research and practice in written form.

These articles are offered here freely for the benefit of the Taijiquan community. This site is still under construction and more material will be put up in due time. A Word Of Thanks To My Teachers I'd like to thank and acknowledge my teachers whose strict teachings and strong moral character have been inspirational and essential to my martial arts development. Taijiquan History And Development By Peter Lim Tian Tek Part 1: The Origin Theories Part 2: The Martial Arts Practiced In the Chen Village Historical Series Notes. Yang ChengFu and Chen WeiMing.mp4. Yang Cheng Fu’s Ten Principles on Tai Chi Chuan. Narrated by Yang Cheng FuRecorded by Chen Wei Ming 1. 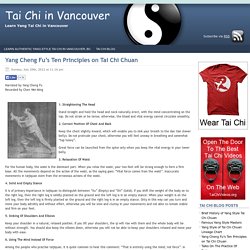 Straightening The Head Stand straight and hold the head and neck naturally erect, with the mind concentrating on the top. Do not strain or be tense; otherwise, the blood and vital energy cannot circulate smoothly. 2. Keep the chest slightly inward, which will enable you to sink your breath to the dan tian (lower belly). The 108 Postures of Yang Cheng Fu. Cheng Man Ching Performs His 37-Movement Tai Chi Chuan. Cheng Man Ching performs his 37-Movement Tai Chi Form, which was filmed at Riverside Park in New York City during the early 1970’s. 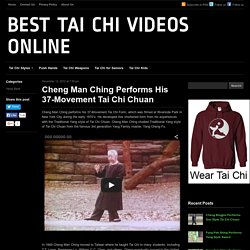 He developed this shortened form from his experiences with the Traditional Yang style of Tai Chi Chuan. Cheng Man Ching studied Traditional Yang style of Tai Chi Chuan from the famous 3rd generation Yang Family master, Yang Cheng Fu. In 1949 Cheng Man Ching moved to Taiwan where he taught Tai Chi to many students, including T.T. Liang, Benjamen Lo, William C.C. Chen, and others. Click on the link below to see this wonderful book by Cheng Man Ching. If you enjoyed this classic Tai Chi Video, please click on the “Like” button! Don’t forget to leave a comment! Comments comments. Simplified Standard 24 Movement T'ai Chi Ch'uan Form (Yang 24 Taijiquan): Bibliography, Lessons, Lists, Links, Quotes, Resources, Notes, Instuctions.  The Wu Short Form: Recommended for Tai Chi Beginners. Movements in this form flow smoothly and steadily to maximize the generation of internal energy, as well as the release of tension. 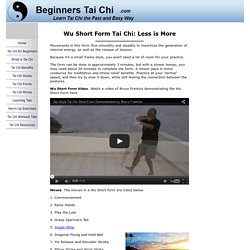 Because it’s a small frame style, you won’t need a lot of room for your practice. The form can be done in approximately 3 minutes, but with a slower tempo, you may need about 20 minutes to complete the form. A slower pace is more conducive for meditative and stress relief benefits. Practice at your ‘normal’ speed, and then try to slow it down, while still feeling the connection between the postures. 8 & 16 Yang Tai chi forms free information and DVD is a must for al new to Tai Chi Chuan as it comes with a full colour book with TCM information. 19 Form « Chenjiagou Taijiquan USA, Chicago. The Chen 19 Form was created by Grandmaster Chen Xiao Wang in 1995 at the request of many students from around the world. 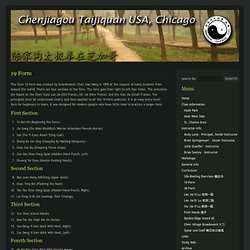 There are four sections in the form. The form goes from right to left four times. The principles are based on the Chen Style Lao Jia (Old Frame), Xin Jia (New Frame), and the Xiao Jia (Small Frame). The principles must be understood clearly and then applied to all the 19 Form postures. It is an easy entry level form for beginners to learn. First Section. Taijiquan Articles at YMAA.com. Tai Chi - EnergyArts.com. Tai chi (Taiji ) is the one exercise that can universally help solve our growing health crisis. 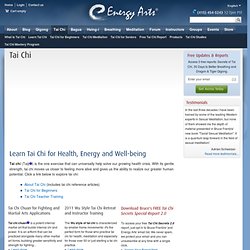 With its gentle strength, tai chi moves us closer to feeling more alive and gives us the ability to realize our greater human potential. Classical Tai Chi Blog. Tai Chi Kung Fu of Long Island. Nei Jia Kungfu Taiji, Xingyquan, Baguazhang Qigong and Liangong. T'ai Chi Ch'uan as a class of Nei Jia Internal Kung Fu Taijiquan (T'ai Chi Ch'uan or Tai Chi Chuan) is a branch of the traditional internal martial arts (or Nei Jia Kung Fu) that spread widely in China over 300 years ago at the beginning of the Qing Dynasty. 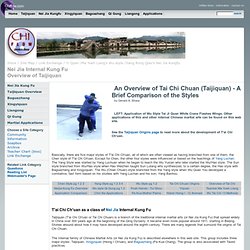 It became even more popular around 1911, starting in Beijing. Stories abound about how it may have developed around the eighth century. There are many legends that surround the origins of Tai Chi Chuan. The Internal family of Chinese Martial Arts (or Nei Jia Kung Fu) is described elsewhere in this web site. According to the famous Wu style Taijiquan teacher Ma Yueh Liang, Taichichuan is characterized by: (1) overcoming hard, energetic, dead, gan force with soft, flexibile, movable, rou force; (2) dealing with an opponent's offense with calm "audible strength;" (3) defeating a stronger opponent by employing greater skill; and (4) using retreat in order to advance.