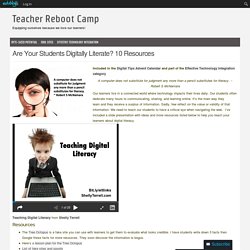 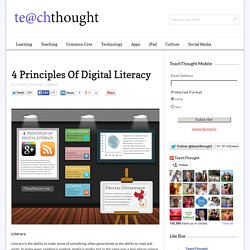 In many ways, reading is reading, media is media, but in the same way a play places unique comprehension demands on a reader compared to a poem or a letter, so do digital media compared to classic media forms. In the 21st century, new literacies are emerging and digital media forms allow communication to be more nuanced than ever before. 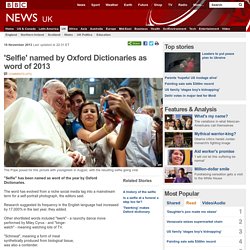 Even the Oxford Dictionary can't resist adding amazeballs, selfie and YOLO. Throughout 2014's great dictionary refresh, one publication remained above attention-grabbing fripperies like adding YOLO, amazeballs and selfie to their lists. 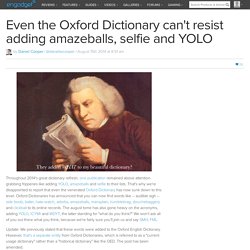 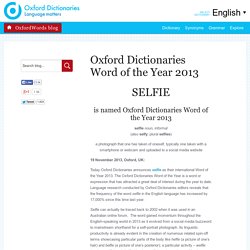 Oxford Junior Dictionary Drops "Acorn" for "Broadband" In the early nineteen-sixties, a passel of newspapers and magazines mounted a cultural jihad against a dictionary. 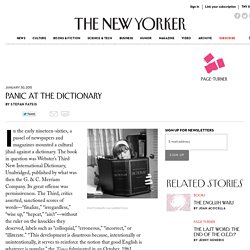 The book in question was Webster’s Third New International Dictionary, Unabridged, published by what was then the G. & C. Oxford Junior Dictionary’s replacement of ‘natural’ words with 21st-century terms sparks outcry. “A” should be for acorn, “B” for buttercup and “C” for conker, not attachment, blog and chatroom, according to a group of authors including Margaret Atwood and Andrew Motion who are “profoundly alarmed” about the loss of a slew of words associated with the natural world from the Oxford Junior Dictionary, and their replacement with words “associated with the increasingly interior, solitary childhoods of today”. 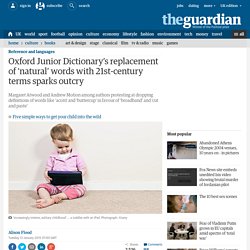 The 28 authors, including Atwood, Motion, Michael Morpurgo and Robert Macfarlane, warn that the decision to cut around 50 words connected with nature and the countryside from the 10,000-entry children’s dictionary, is “shocking and poorly considered” in the light of the decline in outdoor play for today’s children. They are calling on publisher Oxford University Press to reverse its decision and, if necessary, to bring forward publication of a new edition of the dictionary to do so. ‘Selfie,’ ‘Tweep,’ and ‘Hashtag’ Added to Merriam-Webster Dictionary. Two girls take a selfie. 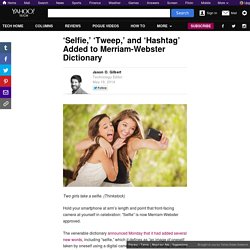 (Thinkstock) Hold your smartphone at arm’s length and point that front-facing camera at yourself in celebration: “Selfie” is now Merriam-Webster approved. The venerable dictionary announced Monday that it had added several new words, including “selfie,” which it defines as “an image of oneself taken by oneself using a digital camera especially for posting on social networks.”

Other tech-centric words added include tweep (“a person who uses the Twitter online message service to send and receive tweets”); hashtag (“a word or phrase preceded by the symbol # that classifies or categorizes the accompanying text [such as a tweet]”); and crowdfunding (“the practice of soliciting financial contributions from a large number of people especially from the online community”). Chris Messina™ (@chrismessina) Chris Messina Talks About Inventing The Hashtag On Twitter. Chris Messina / LinkedInChris Messina, inventor of the Twitter hashtag. 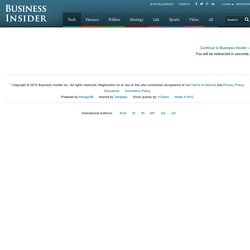 Chris Messina, the former Google designer who first proposed that Twitter adopt the hashtag — or "pound" symbol, as it was called at the time — has explained on Quora why he never bothered to apply for a patent on the idea. A patent could have given him ownership of hashtags as an HTML-activated device that allows Twitter users to sort their feeds by topic.

In theory, he could have licensed hashtags to Twitter made a huge sum of money. Of course, that's not what happened. Messina first proposed that Twitter users use a hashtag to create "groups" back in 2007. How do you feel about using # (pound) for groups. But Twitter rejected the idea, he later told the Wall Street Journal: “[Twitter] told me flat out, ‘These things are for nerds. Now, of course, even Facebook has adopted the hashtag as a news feed sorting mechanism. Hashtag inventor: It was an 'accidental trip over a simple idea' Teaching Adolescents How to Evaluate the Quality of Online Information. An essential part of online research is the ability to critically evaluate information. 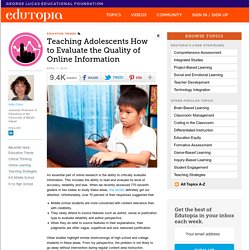 This includes the ability to read and evaluate its level of accuracy, reliability and bias. When we recently assessed 770 seventh graders in two states to study these areas, the results definitely got our attention. Unfortunately, over 70 percent of their responses suggested that: Exactly Where Did the Selfie Stick Come From? Oxford Dictionaries made “selfie” the word of the year in 2013. U.S. consumers responded by making the selfie stick the gift of the year in 2014.

Around the U.S. this holiday season, camera shops, department stores and pharmacies have been having a hard time keeping up with demand for the selfie stick, a retractable pole that people clamp onto their smartphones to take better pictures of themselves. Nordstrom Inc. Literacy in the Digital Age. Crap Detection 101 - City Brights: Howard Rheingold. “Every man should have a built-in automatic crap detector operating inside him.” Ernest Hemingway, 1954 The answer to almost any question is available within seconds, courtesy of the invention that has altered how we discover knowledge – the search engine. 14 brilliant quotes on remixing. Art cannot be created or destroyed — only remixed. In a convincing talk from TEDGlobal 2012, director Kirby Ferguson explores the challenges of originality and freshness in a world where creativity takes root in what has come before. Without previous inventions we would not have the iPhone, the Model T Ford, Star Wars, Warhol’s soup cans, or the electronic musician Girl Talk.

Ferguson highlights that remixing, referencing and reproducing previous innovations allows artists to engage in a cultural dialogue and allows art, technology and society to continue evolving. What Ferguson calls remixing many call plagiarizing. At the heart of US patent law is the desire to protect intellectual property rights and incentivize individual innovation by protecting it from copycatting. Www.knightcomm.org/wp-content/uploads/2010/12/Digital_and_Media_Literacy_A_Plan_of_Action.pdf. Curating versus Stealing.

One of the biggest compliments we can give to someone is to share their work. When someone writes a great post I share it on Twitter, post it on my Facebook wall, or share it out on Google+. Sometimes I even go old school and email it. I even have a dedicated page on my blog which called "Stolen Goods" where I share blogs that I think are valuable. I provide a very short description of the post then I link to the original post. I curate these resources so others can benefit from them.