11 Sample Education BYOT Policies To Help You Create Your Own. We’re putting together some research for some upcoming BYOT policy content, and in the course of doing so found many existing policies enlightening. 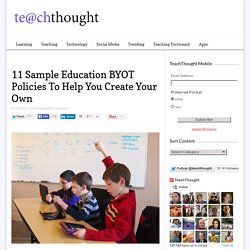 For starters, it is clear that some districts were more open-minded entering their BYOT programs than others. Many “policies” (not included below) were really more of a set of rules and consequences for breaking the rules than they were a supporting framework for teachers and students. In the end, every situation is different. There is no single “right way” to implement a BYOT program, so we’ve included 11 widely varying policy styles below, with each authoring school or district named inline. Bowling Green High School “Bring Your Own Technology” (B.Y.O.T.) Making BYOD Work in Schools – Three School Districts That Have Figured it Out.

Since I wrote the controversial post, “5 Reasons Why BYOD is a Bad Idea” over the summer, and received such strong push back the concerns I noted, I’ve been looking forward to learning about sharing ways in which schools have addressed some of these potential issues. 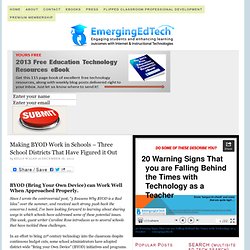 This week, guest writer Caroline Ross introduces us to several schools that have tackled these challenges. In an effort to bring 21st century technology into the classroom despite continuous budget cuts, some school administrators have adopted district-wide “Bring your Own Device” (BYOD) initiatives and programs. Like the name suggests, BYOD programs allow students to bring their own tablets, smartphones, and laptops from home into the classroom for educational use. Oak Hills Portfolio » BYOD. BYOD. Examples BYOD policies.